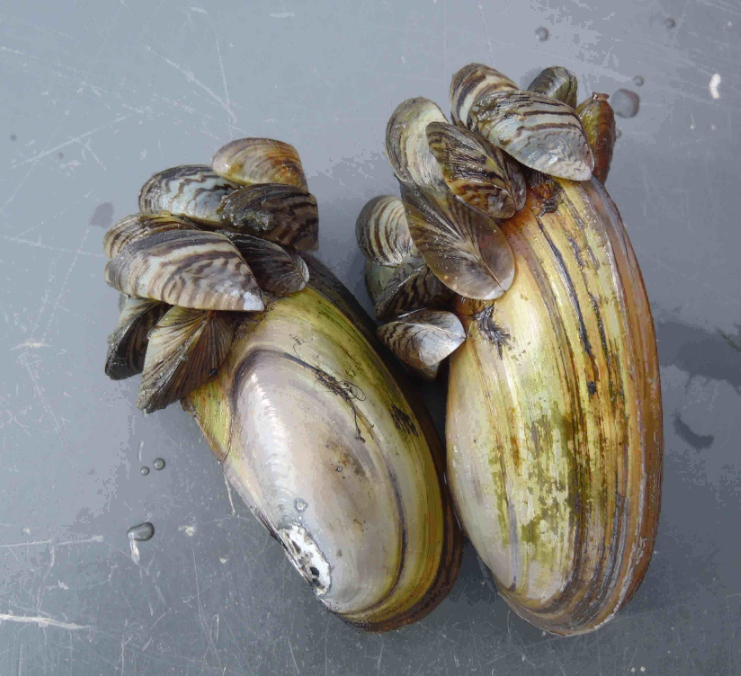 Although contaminants buried in the sediments of Green Bay may be out of sight, they should not be out mind, according to research published last month in the Journal of Great Lakes Research.

Two invasive species — the quagga mussel and round goby — can allow a group of toxic chemicals deposited more than 45 years ago to reenter the food web, passing them to predatory fish and possibly people.

Between 1954 and 1971, polychlorinated biphenyls, also known as PCBs, were discharged into the Lower Fox River in northeastern Wisconsin by manufacturers of carbonless copy paper, said Beth Olson, water program director for the Wisconsin Department of Natural Resources’ East District.

PCBs are potentially cancer-causing and may harm reproductive, neurological and immune systems, according to the Environmental Protection Agency. The chemical was federally banned in 1979.

A decade later, maps of PCB concentrations in Fox River and Green Bay sediments were created by federal and state agencies to direct clean-up efforts.

However, these maps did not assess concentrations in rocky, near-shore areas. These locations provide nesting habitat for a variety of fish species and have also been colonized by quagga mussels and round gobies in recent years, said study author Kimberly Gray, a professor in Northwestern University’s Department of Civil and Environmental Engineering.

The two invasive species are relatively stationary and reside in the lowest portion of the water column, said Gray. They move a large segment of the aquatic food web’s energy to the bottom of Green Bay, where PCBs are most concentrated.

This makes both invasive species capable of refocusing PCBs and introducing them to species higher up on the food chain — like the fish that people catch and eat.

Small mouth bass and brown trout feed upon round gobies, said study coauthor John Janssen, professor for the School of Freshwater Sciences at the University of Wisconsin-Milwaukee. Burbot and freshwater drum eat both round gobies and mussels.

“Even though we are turning off the PCB loading to the system, the in-place pollutants do pose risk, because you find that these food webs are evolving, they are changing,” said Gray. “And by understanding how food web structure and function changes with time, we can understand how contaminants may be mobilized out of these legacy areas and moved into food webs and then eventually into human populations.”

Sediment concentrations recorded by the researchers in 2012 were not exactly the same as those in the late 1980s. However, PCB levels in southern Green Bay were still higher than in the bay’s northern region, which is farther from the Lower Fox River.

To determine their ability to uptake PCBs, quagga mussels and round gobies were collected from 10 locations along Green Bay’s eastern shore. The contaminant was then extracted from their tissues.

As researchers predicted, the areas with the most contaminated sediments also had the most contaminated quagga mussels. The only exceptions were mussels from two areas near the Sturgeon Bay Ship Canal, which had lower tissue concentrations than expected. The canal may allow clean waters from Lake Michigan to enter the bay and dilute contaminants, according to the study.

Analysis of round gobies found that smaller fish had higher PCB concentrations than larger fish, contrary to conventional understanding, Gray said. This is likely because young gobies can enter nests and eat fatty fish eggs that have high levels of the toxin.

Although large round gobies eat quagga mussels, the scientists only found a weak relationship between the PCB concentrations in the two species. This may be explained by the collection of more small fish than large ones, Gray said.

Details of complex food web interactions like those published in this study are important in informing site-specific management efforts, Gray said.

The harvest of PCB-laden round gobies and quagga mussels could help remove the contaminant, but this is difficult to do in high quantities, said Wakeman.

Nearly 552,000 cubic yards of contaminated sediment were dredged in the Green Bay area last year, according to the Environmental Protection Agency. That is enough to fill almost 170 Olympic-sized pools.

Clean-up efforts are scheduled to conclude in 2017. Although PCB levels in fish have declined in some areas of the Fox River and Green Bay, it is too soon to draw conclusions about the fate of the contaminant, Olson said.