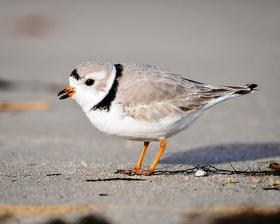 Spring is in the air.

The sun is shining, the flowers are blooming, and the beaches of the Great Lakes are calling.

Well, maybe not for us humans yet.

The piping plover, on the other hand, will be packing its bags and headed for the lake shore in the next couple of weeks.

The endangered species of shorebird was once almost extinct–with just 12 pairs left in the Great Lakes.

But thanks to conservation efforts, scientists are starting to see a rebound in the population.

Current State’s Mark Bashore talks with Vince Cavalieri, a wildlife biologist for the U.S. Fish and Wildlife Service.   He coordinates the piping plover recovery program in the Great Lakes.

This segment was produced by WKAR’s Current State and is reproduced with permission.

One thought on “Piping plovers make comeback in the Great Lakes”