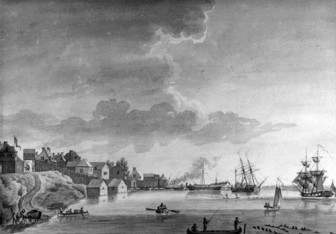 LANSING — The latest research about six 19th century British cannons recovered from the Detroit River is shedding new light on colonial-era militarization of the Great Lakes region, from the Straits of Mackinac to Indiana.

It’s also an opportunity to solve at least three mysteries that date to when Detroit still belonged to the British, even after the American Revolution.

In 1984, divers recovered the first cannon from a ridge called “Chicken Bone Reef” in the Detroit River just offshore from Cobo Hall. Others were found in 1984 and 1987. A Detroit police diving team discovered the sixth during a 2011 training exercise in the same location.
Now it appears the British deliberately dumped the iron cannons — each weighing more than 1,200 pounds and capable of firing a 4-pound cannonball— into the river.

But when, why and how?

That’s what Daniel Harrison is working to determine. He’s the lead researcher and an anthropology doctoral student at Wayne State University.

The 1700s were a turbulent time in the Great Lakes, where “an arms race developed out of contestations, first between European colonial powers and Native Americans, then between rival European empires and finally between the nascent” — recently born — “United States and the British Empire,” Harrison wrote in a recently published study.

“The Detroit River was the knife’s edge upon which the frontier’s balance of power rested precariously from 1796 to 1812,” he said. 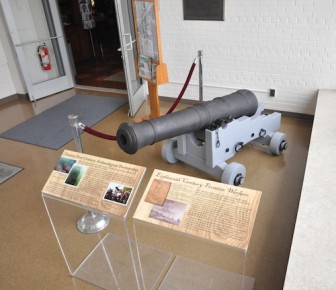 That’s where the cannons fit in.
In an interview, Harrison said, “Part of the project was to look at them as an assemblage, not one gun at a time. The value of my research was to establish what ordnance artillery meant in colonial Detroit between French settlement of the town and the American takeover on the eve of the War of 1812.”

Surprisingly few artifacts from Detroit’s French and then British settlements have been dug up, Harrison said. “The colonial Detroit footprint was highly perishable or not that large to begin with, or both. The river did a better job of preserving major artifacts than the land did.”

Joel Stone, a senior curator at the Detroit Historical Society, said most colonial-era artifacts found on land were parts of a fort that were recovered during construction of Cobo Hall, the freeway under Cobo and the Renaissance Center.

Other than the cannons, little from those times has been found in the river, he said, noting that the riverfront had been about 200 feet further inland during French and British rule.

Even the six cannons came to light solely because divers accidentally found them. For example, the 2011 discovery came during Detroit Police dive team training exercises. With strong currents and visibility limited to one to eight feet, divers literally stumbled across them, Stone said. 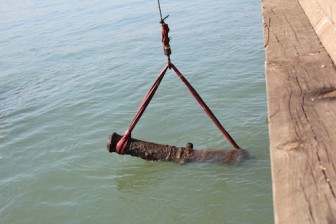 Harrison said the cannon — five manufactured in Britain and one in France — had made their way to Detroit after the military situation in the east settled down after the Revolution.

But where the frontier was still in dispute, control of Detroit remained essential for strategic reasons and the fur trade, he said.

For Mystery No. 1, it’s uncertain exactly when the cannons were dumped, but Harrison’s analysis estimates 1796. That’s when the British high command ordered the “destruction or otherwise” of military equipment “not fit for use.”

For Mystery No. 2, why were they dumped in the river rather than taken, for example, to Fort Amherstburg, which was built the same year in nearby Ontario at the strategic mouth of the Detroit River?

One possibility, Harrison said, is that they were worn out or broken, and therefore unusable.

A second, possibility, however, is that they were deemed obsolete in an age when artillery technology produced increasingly heavier, more powerful cannons for the militarized upper Great Lakes. Even if the 4-pounders remained usable, they could “still be too dangerous to let fall into American hands,” Harrison said.

And for Mystery No. 3, he speculates that the British in Detroit learned a lesson from their counterparts at Fort Michilimackinac who had waited for winter to slide heavy stones across the ice on the Straits of Mackinac to build a wharf. “Winter is the best season for this kind of work,” a British official observed.

So in Detroit, soldiers may have slid the cannons one by one across the frozen Detroit River, deliberately picked a spot shallow enough to retrieve them later if necessary, and let the spring thaw sink them.

“If you leave something on the ice long enough, it’s going to fall through, as every ice fisherman knows,” Harrison said

“The cool thing about the one at the Port Authority is that it is probably within about 300 yards of where it was stationed in 1796,” he said.

His research includes a seventh cannon that documents show had been in Detroit but that was dug up on the Lake Erie shore near Monroe. It’s on display outside the Monroe County Courthouse.
Harrison’s progress on these mysteries still leaves unanswered questions.

Archaeologists and historians want answers to at least one more mystery: Are there more cannon to be retrieved from Chicken Bone Reef?

At one point, British authorities listed as many as 17 4—pounders in their Detroit inventory at any one time after the Revolutionary War, according to Harrison. Subtracting the six from the Detroit River, the one found near Monroe and those that records show were sent elsewhere, “there may be two of three left on Chicken Bone Reef,” he said, adding that the Detroit Police dive team is interested in searching for them.