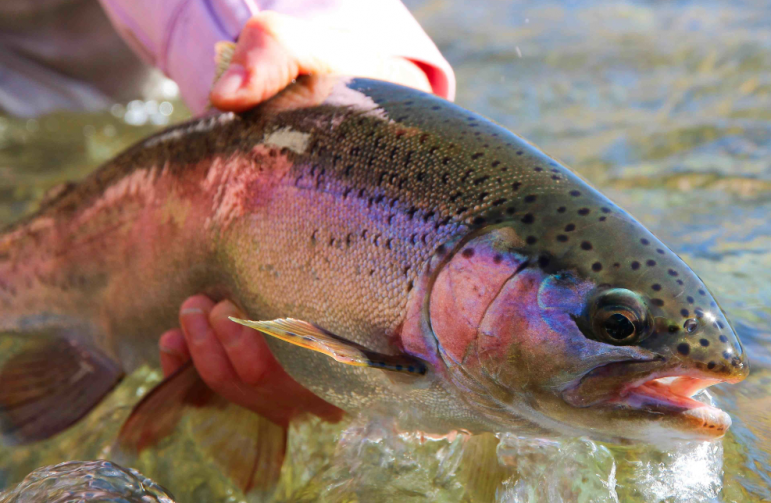 Rainbow trout are silver with a pink stripe running from head to tail. Image: Flickr.

When a farmed fish escapes its pen, does the rest of the lake notice?

Farmed rainbow trout in Lake Huron may outcompete their wild relatives when it comes to growth and feeding efficiency, Canadian scientists report. But they are left for dead when it comes to long-term survival.

The study by the Freshwater Institute Science Laboratory for the Department of Fisheries and Oceans Canada focused on the differences of growth and feeding efficiencies between farmed and wild rainbow trout. It was published last year in the Journal of Great Lakes Research. A copy is here.

Aquaculture, or the farming of aquatic animals, is the fastest growing food production branch in the world, according to the Great Lakes Environmental Assessment and Mapping Project. It estimates that 4,500 tons of aquaculture-farmed animals were produced in Ontario in 2005.

While a growing industry in the region’s inland waters, Great Lakes-based fish farming now occurs only in Lake Huron’s Georgian Bay in Canada.

The researchers sought to assess how fish that escaped aquaculture farms could affect the environment. Such escapes are generally small and continuous or unreported which makes the average number of escapes difficult to estimate, Matt Martens, the head author of the study, wrote in an email.

Farmed rainbow trout possess slightly different traits than their wild counter parts, the study reports. Like most aquaculture creatures, they’ve been bred to grow as quickly and as large as possible. That produces bigger and more fish faster and more efficiently than catching wild fish one at a time.

At first the differences between the two differently raised fish may be hard to see.

Wild, or naturalized, rainbow trout have smaller and more streamlined bodies and may be better conditioned to find food in the lake when compared to the farmed rainbow trout, the study reported.

Not only did their study find that farmed rainbow trout grow twice as large as wild rainbow trout, they also found that the farmed fish are 20 to 40 percent more efficient at turning fish food into fillets.

Their study tanks closely imitated the wild conditions of Lake Huron. The water was kept at lake temperatures. Food was provided at rates that resemble the availability of food in the lake.

Yet the farmed fish continued to grow faster and into bigger fish than the wild ones.

When the tank conditions resembled open water season, May through October, the farmed fish grew to be up to three times larger than the wild fish.

With the aquaculture business growing and some of the farms operating on the shores of lakes and streams, some people worry of the increased chance for farmed fish to escape into the nearby lakes and rivers. They would then be in direct contact and competition with the wild fish.

The wild fish have some advantages of their own, however.

Their bodies are more streamlined, which allows them to move more efficiently through water to catch prey. They also may be better equipped for surviving predators.

The farmed fish are more likely to draw attention from predators, according to another study by Blanchfield and others in 2009. They are not used to the dangers from predators and their constant foraging puts them in harms way

As a result, the farmed rainbow trout are likely to die shortly after escaping. The longest survival time for a farmed fish escaping into Lake Huron during the study was three years.

The life expectancy for wild rainbow trout in Lake Huron is between 6 and 11 years, according to studies done by Scott and Crossman in 1973 and Holm et al. in 2009, said Martens.

It’s unlikely that Lake Huron will be overrun by escaped farmed fish, Blanchfield wrote in an email.

But the issue is controversial.

During a hearing about aquaculture before members of the Canadian Parliament, an aquaculture industry representative testified that escaped fish make no difference in a lake.

In response, the Georgian Bay Association, a Canadian environmental group in northern Lake Huron, cited Blanchfield’s study. It is possible that escaped farmed fish could have a negative effect on the wild population due to their high growth rates and dispersion abilities, Bob Duncanson, executive director of the group, wrote in an email.

Blanchfield said that there is still much to learn about diet, breeding and other interactions between aquaculture-bred fish and the native fish community.