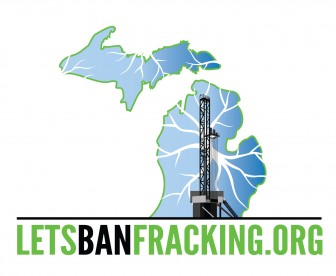 LANSING — Across Michigan, citizen activists and environmental groups are working to prevent the expansion of the fracking industry, which they view as a threat to Michigan’s environment.

Hydraulic fracturing, most commonly referred to as “fracking,” is a method used by energy producers to extract natural gas and oil from wells drilled thousands of feet beneath the earth’s surface.

Cannon Township, for example, approved an ordinance that included restrictions on dusk to dawn lighting, prohibiting unshielded lighting in all zoning districts. Most fracking operations run throughout the night, using lighting for their operations; therefore this ordinance would hinder a fracking operation’s efficiency.

One major concern for those opposed to fracking is the high volume of water that is used during the extraction of the natural gas.

According to a recent report, in 2011 and 2012 Encana Oil and Gas used more than 47 million gallons of water in its fracking operations in Kalkaska County.

Erin McDonough, president and chief executive officer of the Michigan Oil & Gas Association, acknowledged there have been a couple of wells that have used a large amount of water. But she said,“water use overall is extremely small compared to the rest of the state.”

In a letter to the Michigan Department of Environmental Quality, David Hyndman, professor of hydrogeology and environmental geophysics at Michigan State University, said research showed fracking operations have likely had, and will continue to have, adverse effects on the the volume of water flowing through Au Sable and Manistee River watersheds.

Marathon Oil, which recently purchased the mineral rights to the Kalkaska County operation, is currently evaluating its plans for the site, the company said in a statement.

Despite concerns from environmentalists, those in the energy industry say that hydraulic fracturing has been used in Michigan for many years, without any adverse effects on the environment.

“We’ve been using this process over 60 years,” McDonough said. “We have safely hydraulically fractured over 12,000 wells in Michigan.”

The fracking industry in Michigan is not as extensive as it is in many other states. According to the Michigan Department of Environmental Quality, only 16 high volume hydraulically fractured wells operate in the state, located primarily in the northern half of the lower peninsula between Traverse City and Alpena. In a high-volume state such as Pennsylvania, FracFocus reports thousands of operating wells.

While many environmentalists are concerned about fracking, natural gas extraction remains part of Michigan’s energy plans. Gov. Rick Snyder mentioned transitioning from reliance on coal to natural gas, as well as renewable energy in his State of the State address. Snyder is expected to release a long-term energy plan in March.

The Michigan Department of Environmental Quality states on its website that hydraulic fracturing has never been responsible for environmental damage in the state.

Despite the relatively small number of fracking operations, environmentalists expect the governor’s new energy plan to include an expansion of natural gas extraction. In anticipation, environmental groups have been active in ensuring local governments have some say about what type of industry moves into their communities.

Nancy Shiffler, a member on the Sierra Club’s Beyond Natural Gas Committee, said the Sierra Club is opposed to fracking entirely. With this in mind, the organization looks for legislative opportunities to restrict fracking, but with the current composition of the state legislature, the focus of the Sierra Club tends to be more on stopping pro-fracking legislation. This leads environmental leaders to look for policy opportunities at the local level.

“Local communities find themselves with very little say about what’s going on with drilling,” Shiffler said. “We look for ways that those communities can constrain things a bit.”

One group working to strengthen communities’ response is Traverse City-based For the Love of Water, or FLOW, a non-profit organization which aims to protect the rights of the people and waters of the Great Lakes Basin.

The state of Michigan issues permits for oil and gas extraction so local ordinances cannot prevent these companies from fracking in their towns and cities.

However, local governments do have some leverage against these oil and gas companies.

In 2013, FLOW began educational workshops for citizens and officials of local townships on fracking and to help develop local ordinances to minimize industrial impacts on water and land, said Liz Kirkwood, an environmental lawyer and executive director of FLOW.

Shirley Kallio, a resident of Cannon Township in west Michigan and an environmental activist, attended one of FLOW’s fracking workshops. After the seminar, Kallio worked with local officials to pass three new ordinances this year designed to give the township more authority when dealing with the natural gas industry.

Along with the ordinance to restrict dusk to dawn lighting, Cannon Township also passed an ordinance which makes it a civil infraction for an entity to release or drain any contaminated water onto the surface of any land. The water used in the fracking process is mixed with chemicals at the onset of the operation, so any water not properly disposed of during the fracking process would be subject to this ordinance. Violators of this ordinance would be subject to fines of up to $2,500.

“This is an ongoing process, and we’re probably going to add more ordinances to these,” said Cannon Township Supervisor Steve Grimm.

For those in the energy industry who say fracking does not pose an environmental threat to these communities, communication with local communities is also an important tool.

“We are a technology and science driven industry, which can be very complicated,” said McDonough. “We’re looking to reach out to local communities, and say we are here and available to talk about any concerns they may have.”

Cannon Township is not the only place in Michigan where FLOW hopes to educate and influence local citizens and officials on the issue of fracking. Last year, the organization held workshops in Gun Plain Township in Allegan County, as well as Conway Township in Livingston County. Kirkwood said that the organization is planning to expand their workshops to three new communities this year.

For many activists, the time involved is worth it.

“I feel a responsibility to my home, my family and my neighborhood,” Kallio said. “If the oil and gas industries do come, then we want to give ourselves as much protection as we possibly can.”