Since the growth of St. Mary’s Cement Co. in Charlevoix, Mich., during the 1970s, the landscape of the area has dramatically changed.

Built in 1967, the plant began manufacturing cement-related materials for businesses within the Great Lakes region. The photo from 1965 shows that many trees once covered the area. Today, the plant occupies 70 acres and has landfills containing cement kiln dust, a byproduct of the cement-making process.

As the demand for cement increased in the 1970s, so did the need for more landfill space to accommodate piles of cement kiln dust, said John Dixon, a former plant manager.

“They wanted to modernize the plant in 1979 by expanding their capacity,” said Dixon.

In 1979, the plant introduced about 75-100 new jobs, said Chuck Center, supervisor for Charlevoix Township. That attracted many people to the township.

“The jobs and property tax make it an asset,” Center said.

The photo of the area today displays a long tube-like structure that extends out into Lake Michigan. The structure is a channel used to make the process of loading cement easier, Dixon said.

“They ship 1.5 million tons of cement each year and it goes out exclusively by boat and freighters,” he said. 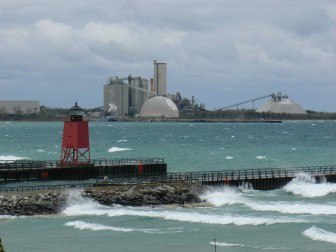 In the 1970s, the plant lacked an effective method of managing the cement kiln dust. Workers used a dry process that scattered dust into the air, sometimes covering cars, said Nancy Rajewski, a Charlevoix Township trustee who has lived near the plant since 1978.

“When we moved here there was some controversy about its expansion,” said Rajewski. “We have a house that is not very far from the plant and we used to get a lot of kiln dust. Over the years, it has improved.”

Rajewski said most of the complaints the township received were about noise, not dust. She said the plant workers use dynamite on occasion to create holes for kiln dust storage. Then, they cover the piles with dirt and plant trees on top of them.

“Some people will hear the blast and complain it would shake their house. So far, what they’ve done has not affected us,” she said.

Cement liners function like a frame around a kiln dust pile, preventing it from running off into the lake and soil.

Before 1990, the plant had a permit under the Mine Reclamation Act, which didn’t require the use of liners, said Phil Roycraft, district coordinator office of waste management at the Department of Environmental Quality (DEQ).

“Prior to 1990, the kiln dust was not managed like solid waste would be,” said Roycraft. “They got a permit under the Mine Reclamation Act that didn’t have many requirements.”

He said the dust can impact the pH levels of soil, causing fish and plants to die if exposed. For humans, it can cause severe irritation to the eyes and skin or damage the nose, throat or lungs if inhaled.

In the 1990s, Roycraft said plant officials improved practices to meet state and federal standards. The DEQ monitors the plant regularly to ensure it complies with EPA requirements.

“In the 90s, plants began using liners to prevent run off into the lake,” he said. “St. Mary’s made improvements stack commissions and reduced air emissions.”

Now the plant uses a wet process to keep the kiln dust from being airborne. It involves using a stone to grind wet minerals before they are put into the kiln. This prevents dust from flying into the air.

The township has had a good relationship with St. Mary’s Cement Co. over the years, said Rajewski who has visited it several times to monitor the procedures for making cement.

“They send us a plan annually to tell us what they plan to do for the following year, where they’ve mined in the past year and what part of the ground they will be mining in,” she said.

“The project is in its first phase”, said Rajewski. “Once the second phase begins this spring, I expect it will be complete by fall.”