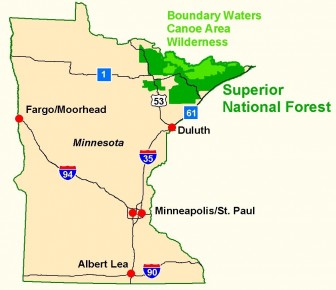 The 8th U.S. Circuit Court of Appeals unanimously on Dec. 4 rejected a bid by Ryan Scharber for a shorter sentence.

Scharber confessed to setting nine fires on federal and state forestland and admitted to attempted arson at a local resort.

Scharber was arrested after the resort’s owner found him trespassing and discovered a gas can leaning against the back of a garage. He told the owner he’d driven onto the resort’s property to urinate, the court decision said.

He was chief of the Babbitt Volunteer Fire Department at the time and worked full-time at a local mine.

The U.S. Attorney’s office charged him with three felonies involving fires set in the national forest between October 2011 and September 2012 and attempted arson at the resort in December 2011.

He pled guilty to two charges, one of which carries a minimum five-year prison term as an anti-terrorism measure, and was sentenced last April.

However, he argued that the minimum mandatory sentence didn’t apply because the government “failed to prove that he acted with malice in attempting to commit arson” at the resort.

The defense also argued in court papers that Scharber deserved a shorter sentence because of his “extreme remorse, his willingness to seek and enter therapy for his behavior and the support he has of his family and people in the community.”

His lawyer, Joseph Tamburino of Minneapolis, wrote in a pre-sentencing memo, “Not all arsonists are the same. Scharber lit small fires in his attempt to ameliorate a stressful environment at home and because it became a compulsion to do so. He never intended that the fires destroy large amounts of property or endanger the lives or wellbeing of anyone in his community.

The trial judge disagreed, and so did the appeals court.

Writing for the three-member appeals panel, Judge Diana Murphy said the evidence showed that Scharber had acted maliciously and had admitted “he was going to set fire” to the resort garage.

And the pre-sentencing report said he “intended to start a fire with a gasoline can and propane lighter prior to being confronted by the owner,” Murphy said

Scharber, now 31, is serving his sentence at the federal medical center in Rochester, Minn., and is scheduled for release in January 2019, according to the U.S. Bureau of Prisons.