This image of the shipwreck Monohansett was created with a laser. Image: Sarah Waters

Diving is not the only way to get an in-depth look at the mysteries beneath the surface of the Great Lakes.

Lasers, underwater robots and other innovative technologies are simplifying the discovery and research of hundreds of shipwrecks at the bottom of the Great Lakes.

Thunder Bay National Marine Sanctuary, a part of the National Oceanic & Atmospheric Administration (NOAA), is a 4,300-square-mile shipwreck sanctuary in northwestern Lake Huron near Alpena, Mich. It has one of America’s best-preserved and nationally significant collection of shipwrecks.

There are 92 known wreck sites in the newly expanded sanctuary and four have been listed on the National Register of Historic Places, said Sarah Waters, the educational coordinator at the sanctuary.

Thunder Bay still uses divers to study shipwrecks, but recently it began investigating them with lasers. 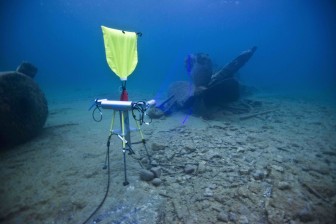 A laser is used to map the wreck of the Monohansett. Image: Sarah Waters

“This past year we worked with a company called 2G Robotics and produced a laser scan/point cloud data of one of the shipwrecks called the Monohansett,” Waters said.

“It’s basically a laser scanning technology and it has been done a lot, but not underwater.”

The purpose of the project was to use laser scanning technology to more fully document sanctuary resources, Russ Green, Thunder Bay’s deputy superintendent and research coordinator, said in an email.

It allows sanctuary archaeologists to document complex areas of shipwreck sites that would be otherwise difficult to capture in detail.

Lasers aren’t the only technology used to study shipwrecks at Thunder Bay.

“We use different kinds of sonar, including multi-beam,” Waters said. “That sonar is in the hull of our research vessel and our ships, but we can also tow sonars behind ships too.”

Other researchers at Thunder Bay bring autonomous underwater vehicles–these are known as AUVs– which are not connected by a tether, Waters said. 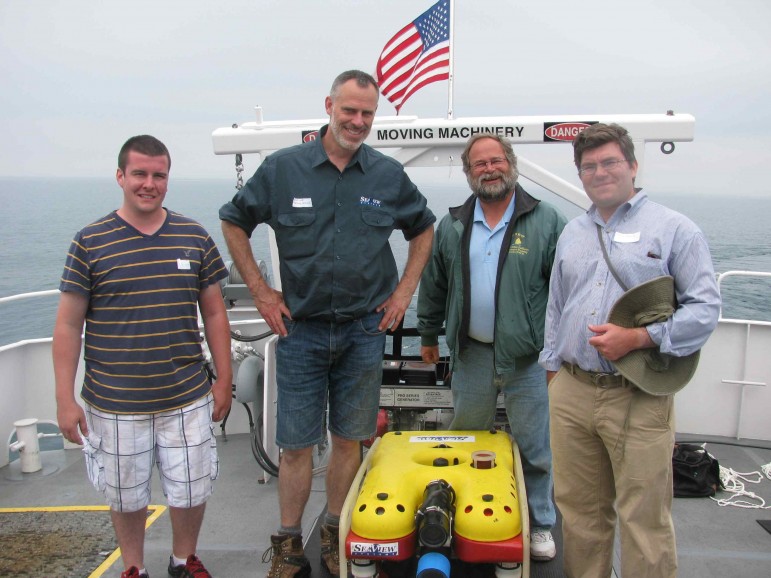 State University, demonstrated how they use ROVs to explore shipwrecks at the recent Great Lakes Stewardship Initiative (GLSI) conference. The annual conference is for educators and organizations working to develop stewards of the Great Lakes and its ecosystems.

Gleason said their team has used several different ROVs and side scan sonars to explore shipwrecks. Their partnerships with other schools, government agencies and businesses have allowed them access to a wide range of marine gear, he said.

Schwartz said the great thing about ROVs is you don’t need dive certification and you can operate them for as long as you have power. In comparison, divers can spend only a limited amount of time underwater.

New photo technology also gives people a detailed image of a wreck, Waters said. Thunder Bay researchers use photographs and video to create photo mosaics. A camera is mounted onto a special underwater sled that holds it at a fixed level. The images can then be put into Photoshop to make a mosaic of the site.

There is a specific protocol for characterizing and evaluating a site when a shipwreck is discovered, Waters said.

Since pieces of the wreck can be scattered, remote sensing is first used to show researchers what the bottom of the lake looks like so they can locate all of the pieces.

Researchers evaluate a site with divers, sonar or robots. Then they use laser-scanned imaging to build a photo mosaic.

The main goal is to identify the ship.

“Not only its name, but what kind of ship it was,” Waters said. “Was it a sailing ship and what type of sailing ship was it? Was it a schooner? Was it motorized or did it have a propeller?”

Those who research shipwrecks at Thunder Bay are interested in finding out more about the people who were on the ship, such as if any of them survived the wreck and if they continued to work on ships, Waters said. Finding out if the ships carried passengers or goods tells researchers more about the commercial activity that was happening in the Great Lakes when they sank.

The most eye-catching characteristic about Great Lakes shipwrecks to experts is that their preservation is unparalleled, Schwartz said.

“You see this kind of preservation in areas like the Black Sea,” Schwartz said. “None of the woods decay as much because you don’t have the kind of organisms that you do in the ocean that eat away the wood.”

And the cold, fresh water also helps preserve them, he said.

The Cornelia B. Windiate, a schooner that is sitting perfectly intact at the bottom of Lake Huron, is one of Waters’ favorites. Typically when a wooden ship sinks, the air trapped inside will push out as it’s going down which causes the hatch covers to come off. What’s unique about the Cornelia is that the hatch covers are still attached to the ship.

“The Cornelia is still in place though and it’s very ghostly–it’s very telling of most shipwrecks in the sanctuary,” Waters said.