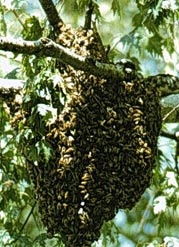 Bees, which are crucial to food security in the Great Lakes region, are declining in the northeastern United States and southern Canada, according to a recent study published by the American Association for the Advancement of Science.

Bee pollination is necessary to produce crops  in the region, including apples, blueberries, grapes and leafy greens. Bee pollination is responsible for $15 billion in increased crop value each year in the U.S., U.S. Department of Agriculture (USDA) data shows.

“Bees play a key role in the productivity of agriculture through the pollination of fruits and vegetables,” according to the Honey Bee Research Centre at the University of Guelph in Ontario. “Honey bees have a crucial role in pollinating many of our staple crops. Without effective pollination we would face higher food costs and potential shortages.”

Faculty and students at the university are investigating the effects of parasites and pesticides on the behavior and immune responses of honey bees.

And the USDA recently awarded Michigan State University a $6.9 million grant to develop sustainable pollination strategies for specialty crops in the U.S.

There are three main issues contributing to the bee decline, according to Sarah Scott, who works to improve forage conditions for honey bees on USDA lands: the varroa destructor, loss of natural bee pollination habitat and pesticides.

There was a huge loss of the honeybee population in 2005 caused by the varroa destructor, an external parasitic mite that attacks honey bees, but Scott, said, “It’s not just one specific issue, it’s an interplay among many different factors that are impacting bees survival. If we didn’t have bees, someone would have to walk around with a tiny cotton swab to pollinate crops.”

Scott said she doesn’t think more bees are necessary to address the problem. Instead, she suggests more bio-diverse sources for bees to pollinate from, such as small potted flowers and wildflowers in home and community gardens.

Another reason for the lost of hives is referred to by researchers as colony collapse disorder (CCD) linked to pesticides. According to a study published by the Harvard School of Public Health, “Since 2006, there has been significant losses of honey bees from CCD. Recent findings, suggest that CCD is related specifically to neonicotinoids pesticides which may impair bees’ neurological functions.”

Recently the Ontario environmental commissioner, Gord Miller, said that bee-killing pesticides are a bigger threat to crops than the now-banned insecticide DDT.

Wash doesn’t use pesticides. He said he fogs his hives with mineral oil foggers, doesn’t use chemical treatments and doesn’t take honey from his bees the first two years.

“I haven’t lost any hives yet, but I don’t pollinate and I think bee farmers who pollinate probably are at a higher risk to lose bees from genetically modified crops,” Wash said.

He also said that genetically modified seed treated with the widely used insecticide neonicotinoid is killing all sorts of pollinators,” including bees.

Peter Chorabik, who works at the Toronto Bee Rescue, an urban beekeeping and hive removal service, says the need for bees is closely linked to food security. As farms continue to expand their use of monoculture, the need will continue to be critical.

“The pesticides used on the cash crops are having a negative impact on bees. Neonicotinoid seed coatings are used on almost 100 percent of corn planted in Ontario, regardless of the need for pest control.”

Jessica Steller is a co-owner  of Steller Apiaries in Jackson, Michigan. Steller’s practices are a natural alternative to the commercial chemical-based beekeeping industry, according to the company.

She and her husband are trying to help sustain the honey bee population. “After two years of 100 percent losses, we began to really research what it took to tend bees, not to keep a hive, and we discovered alternative beekeeping.   Learning about the cycle and lifestyle of the bee has made me a much more in-tune beekeeper.”

As for Dan Zikursh, a beekeeper in Mentor, Ohio, he said the decreased bee population is because of bad beekeeping practices. He has had more than 20 hives without an incident of CDC.

“I don’t really believe in CDC, I believe people have gotten lazy and bad beekeeping practice has become a common wisdom,” he said.

However, Zikursh doesn’t blame pesticides as the main cause of CDC.

“Less honey per hive is more work if you want healthy bees. Sure, the best option is less pesticide to begin with but that means less produce for the farmer. There are trade-offs either way,” he said.