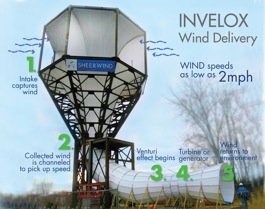 The Michigan National Guard is spending $1.5 million on two new machines to generate electricity from wind at Camp Grayling near Grayling and the Fort Custer Training Center near Battle Creek.

Unlike traditional windmills, the system captures wind from all directions, concentrating and accelerating it before sending it through a turbine on the ground, according to its designer, Sheerwind Co.

Sheerwind calls the design INVELOX, which stands for INcreased VELocity. The company says that the system generates six times more electrical energy than conventional wind turbines and can work at wind speeds as low as 2 mph. And it’s cheaper to build and operate.

Some wind power experts say that’s too good to be true.

“The first attempt to build a ducted turbine similar to the Invelox was made 90 years ago,” Mike Barnard, a senior fellow with the Energy and Policy Institute, wrote in an email. “Every attempt since has failed. The analysis of Sheerwind’s published numbers makes it clear that they have failed as well, and are trying to pretend that they’ve succeeded.”

The shaded area is the swept area. Image: home-energy-metering.com

wind turbine that has the same swept area (see picture 1) and height as INVOLEX. Instead, INVOLEX was compared with a wind turbine that is as small as the one installed inside it and that is not as high, he said.

“Pretty much any device will look good if you make that comparison, even if it’s terribly inefficient. It’s comparing watermelon to grapes,” said Barnard in the email.

Carla Scholz, Sheerwind’s vice president of marketing & communications, disputed Barnard’s criticism and said that the company would not comment on it.

And Michael Stone, the assistant adjutant general for installations with Michigan Army National Guard, said that the Michigan Guard is happy to test the wind funnels and he was confident that it is a good investment.

“I think the wind funnels will be competitive,” he said. “I am predicting that the results will not be as spectacular as the company advertised, but I am predicting it will be very good.”

The funding comes from the National Guard Bureau and the construction will be undertaken by Ripman Construction Co. of St. Helen, Mich.

Stone said he and his chief engineer have been looking for ways to increase the proportion of renewable energy used by the Michigan National Guard.

The Michigan National Guard seeks to increase the percentage of renewable energy that it uses to 25 percent by 2020, he said, “We are working with the community partners and utility companies to try to find creative, cost-effective ways to get there.

“Actually we are a pilot for the National Guard nationally on how well (the wind funnels) will work; what’s right and what’s wrong with that; and what kind of return the investment would get once we install them.”

“When there is a national emergency, a homeland security disaster, (like) a flood or tornado, you want your National Guard to be able to continue to operate,” Stone said. “So having our energy source supply that is renewable, that generates our own power, and not be dependent on the grid is very important for us.”

Dulles Copedge, energy adviser for the Michigan Army National Guard, said right now Sheerwind is doing wind studies as part of the engineering design. Construction could start by next spring.

Both Copedge and Stone predict that if INVOLEX works well, more of the wind funnels will be installed both in Michigan and nationwide.

A media relations representative for the National Renewable Energy Laboratory, the national laboratory of U.S. Department of Energy to study renewable energy generation, said the organization hasn’t tested that wind model and is not familiar with it.