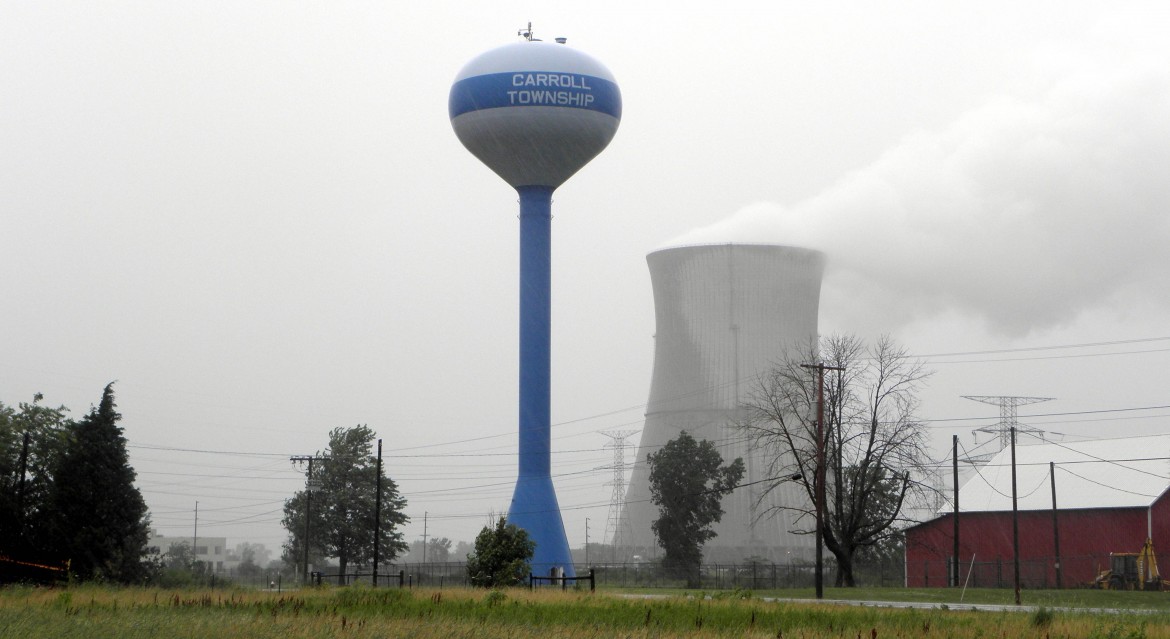 Editor’s note: This is part of a series of Lake Erie stories called “The year of the lake” reported by independent radio producer Karen Schaefer with support from the Ohio Sea Grant College Program at Ohio State University.

ANCHOR INTRO:  This year the amount of harmful algae forecast for Lake Erie is predicted to be less than last year and considerably less than the record outbreak of 2011. But it’s likely to still be significant, coating some parts of the western basin in toxic green slime. Under certain conditions, even moderate blooms can produce levels of harmful toxins that threaten drinking water across the basin. Producer Karen Schaefer reports:

SCHAEFER:  The 2011 Lake Erie algae bloom was the worst ever recorded, even worse than back in the 1960’s and ’70’s. But it turns out last year’s outbreak wasn’t much better.  At a recent press conference at Put-in-Bay on Lake Erie, National Oceanic and Atmospheric Administration scientist Rick Stumpf admitted he initially under-estimated the 2013 bloom. 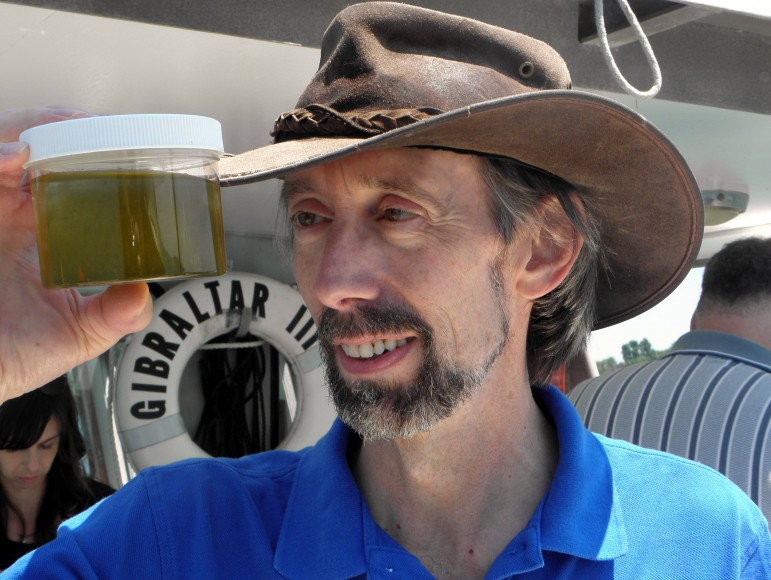 SCHAEFER:  That’s on a scale of 1-to-10. On that same scale, the 2011 bloom would be a 10.  Stumpf uses a combination of satellite imagery, computer modeling, and water samples gathered by multiple agencies to create his forecasts.  Part of the problem with last year’s forecast, Stumpf says, was that July rains were unexpectedly intense, washing heavy loads of phosphorus fertilizer, which feed the algae, from farmland along the Maumee River into in Lake Erie at Toledo.  It was a recipe for more algae. But it wasn’t just the rain.  It was also the wind.

STUMPF:  There had been north winds which pushed blooms to the Ohio coast. After that, there were stronger winds which mixed it into the water.  And as result you now had this very strong bloom pushed right up to the coast, mixed through to the point where the intakes were.

SCHAEFER:  The intakes Stumpf is referring to are the underwater pipes where drinking water is pulled from Lake Erie into local water systems. On both sides of the US/Canada border, more than 11-million people get their drinking water from the lake.  That includes cities like Toledo, Sandusky, and Cleveland.  During the algae bloom of 2013, at least two of those systems were in crisis.  Last September, at western Lake Erie’s Carroll Township, water treatment manager Henry Biggert saw levels of algae toxins so high, he closed the plant and issued a ‘do not drink’ order for some 2-thousand residents.

HENRY BIGGERT:  We made that call, I guess you could say, somewhat out of fear, but definitely on the conservative side.  We didn’t want to take that risk.

SCHAEFER: Biggert says toxins at his plant were three times higher than the World Health Organization’s recommended safety level.  There are currently NO US public health standards for algae toxins in drinking water. Both the US EPA and the Centers for Disease Control say they hope to release the first national guidelines by the end of this year.  According to the CDC, high levels of algae toxins are potentially deadly for people and even low levels can kill farm animals and pets.  Biggert has since spent more than a quarter-million dollars in new ozone technology to kill the toxins.  But he still sweats the consequences if he guesses wrong. 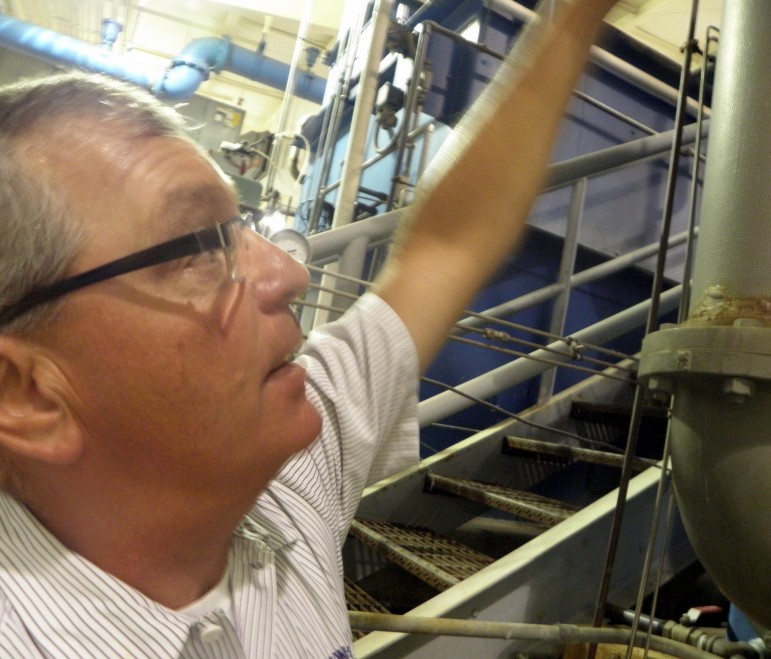 BIGGERT: If it gets any worse than last year, it’s going to be a real challenge to overcome. Even with our new equipment, you just say never say never with this stuff.   There aren’t recall options. You can’t send water out and then, you know, wait a minute, you know, that was a bad batch and call that back.

SCHAEFER:  Does any of this keep you up at night?

SCHAEFER:  Biggert says he gets free testing from the nearby city of Oregon several times a week during heavy blooms.  But in Toledo, the assessment and treatment costs are high. City of Toledo water treatment manager Andrew McClure says he spends about about $3,000 a day for extra chemical treatment when algae blooms are intense — an annual additional cost of over a million-dollars.  And all along the lake, more cities are now looking closely at what they need to do to keep algae toxins out of drinking water.  McClure says last year, the city of Toledo also came perilously close to declaring a ‘do not drink’ alert.

MCCLURE:  I guess we’re prepared for it. We have good, tight communication with water plants all along the western basin from Monroe to Elyria. 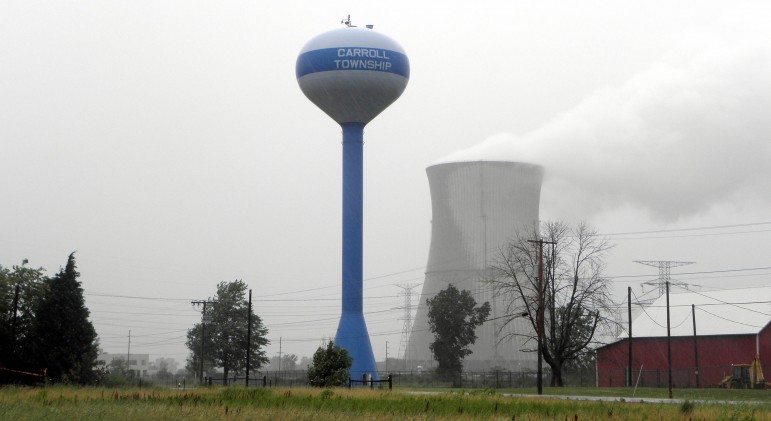 Carroll Township water – Carroll Township in western Ohio had to issue a “do not drink” order for its 2-thousand residents last September due to high levels of harmful algae toxins. The township also provides water to the Davis-Besse nuclear power plant. Image: Karen Schaefer

STUMPF: We monitor where the blooms are, what the winds are doing, and what the winds are forecast to do.  So we will be using the bulletin and the modeling we do in that in order to address any possible concentration of bloom on the Ohio coast.

SCHAEFER:  At the end of June, President Obama signed a re-authorization of the federal law aimed at reducing harmful algae blooms. The legislation includes 82-Million dollars to bolster efforts by NOAA and the US EPA to study and monitor toxic algae, for the first time including freshwater systems like the Great Lakes.   For Great Lakes Echo, I’m Karen Schaefer.