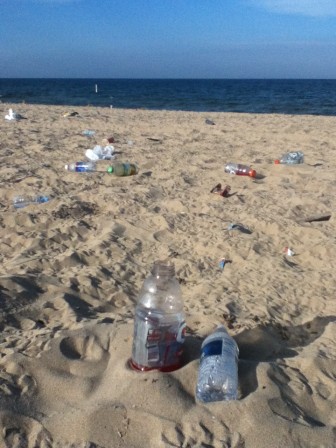 State and local park and beach officials this week cleaned up debris left by Fourth of July revelers.

The holiday weekend brings a lot of people to state parks, said Matt Shaver, lead ranger at Michigan’s Grand Haven State Park. Unfortunately, it draws a younger crowd that leaves water bottles and garbage in general on the beach.

The problem didn’t seem to be any worse than other years at the Grand Haven State Park, Shaver said. But some beach experts worry that it could be on the rise.

The garbage left by festival-goers is becoming more apparent, said Jamie Cross, who manages the Adopt-A-Beach program for the Alliance for the Great Lakes.

“There’s a lot of food waste and trash that ended up being left behind after people watch the fireworks, either in communities or big festivals,” Cross said. “There are fireworks at some places, like for example Grand Haven, people go to the beach to watch fireworks and leave all sorts of trash behind.”

Last year volunteers in the Adopt-a-Beach program picked up 1,345 pieces of firework debris from beaches. More than 1,000 pieces of just firework debris has been collected each of the past three years by the program. That doesn’t include the other garbage left behind.

Nearly 300 plastic water bottles were found on Lake Michigan in the Grand Haven State Park beach after the fireworks and that was after the initial beach clean up, said Cross.

Parks, land managers or people in charge of Fourth of July events should consider making any vendor or event host contractually accountable for debris, said Todd Brennan, the watershed project manager in Wisconsin for the Alliance for the Great Lakes.

“Overall, it’s just more people being on the beaches and not being cognizant of their collective impact of litter,” Brennan said. “When there’s several hundred thousand or more people using the beach, maybe even millions, during that time of year it definitely leaves an impact.“

The debris clean up is both timely and costly.

“All day long we have staff here that dumps trash and they pick up litter,” Shaver said. “Currently we’ve had staff picking until 3:30 in the morning, picking up the park the best that they can in the dark.

“Then we have staff come in the next day along with a volunteer group to start with picking up all of the trash off the beach.”