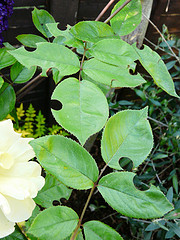 Changing his perspective on bug-eaten leaves and flowers led Peter Kevan, director and principle investigator of the Canadian Pollination Initiative, to consider them not ruined, but improved.

He’s created an insect art competition with Rodger Tschanz, the trial garden manager in the department of plant agriculture at the University of Guelph, and Kim Fellows, the pollination outreach coordinator at Seeds of Diversity Canada.

The contest is August 15 at the University of Guelph, about an hour southwest of Toronto. 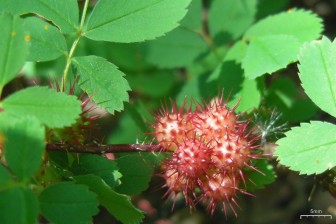 The organizers aim to turn gardeners’ frustration with holey plants into pride in their aesthetic beauty, Kevan said. They created three awards based on the kind of insect damage – or art – most commonly found in a garden.

That includes the best display of plants that have marks from leaf-cutting bees.

Another award is for the best galls on a rose plant. Galls are the swelling of leaf tissues produced by insect eggs that have been laid in them. 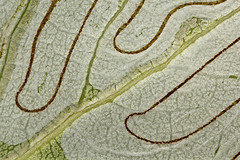 And yet another prize category is for the best display of an insect-mined leaf. These leaves exhibit intricate lines produced by insects that eat their way through them. Such entries must be pressed onto paper, such as a greeting card.

Insect and other damage to plants and vegetation is often depicted in old paintings, Kevan said.

“That was a bit of the inspiration with trying to bring back that sort of approach to people in their garden, that not everything they see as damage is necessarily something to be destroyed,” he said. “It can have it’s own beauty.”

Different groups of insects feed differently and leave different evidence of their presence, said Deb McCullough, a professor in the departments of entomology and of forestry at Michigan State University.

“I can see where people would find an object like that to be a little artsy,” she said.

The damage that is typically most interesting is done by younger stages of insects. Often this “art” is not made by adult insects that you typically see flying around, McCullough said.

“What you do see is evidence of where the immature insect did their feeding,” she said.

The eating patterns found in the plants can tell you which insect was there, McCullough said. Much like you can tell deer tracks from raccoon tracks in the woods, you can identify insects by the eating patterns they leave in plants.

For instance, caterpillars eat just the soft, nutrient rich green tissue of a leaf but leave the veins, said McCullough. This type of insect is referred to as a ‘skeletonizer’ for the way it leaves behind just the skeleton, or veins, of a leaf.

While the competition is purely for fun, it benefits people by familiarizing them with the insects living in their garden, McCullough said.

The majority of insects aren’t causing problems to plants, but occasionally there are some that do, she said. This competition helps gardeners become aware of the insects that are around them and that may be causing problems.

This is the first year the competition has taken place. The entries are limited to leafcutter bees markings, rose galls and serpentine leaf miners, said Tschanz at the University of Guelph.

The competition is during an open house for the university’s new trial garden. Entries may be mailed in by August 8 following the guidelines on the entry form or physically brought in from 9 a.m. to 11 a.m. on the day of the competition.  The judging begins at 11:30 a.m. on that day.

Hundreds of people visit the university every year and the organizing group hopes the contest gives gardeners and horticulturists yet more exposure to it.