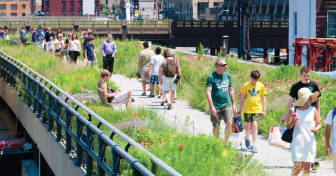 Despite recent economic challenges, Detroit’s future as a walkable city is promising, according to a recent study by George Washington University.

Significant improvement is expected due to the investment in 40 office, retail, and residential structures by Quicken Loans, according to the study by Chris Leinberger and Patrick Lynch at the university’s school of business. Also, Detroit’s suburbs of Ann Arbor, Ferndale, Royal Oak, and Birmingham are making strides in walkable urbanism.

A WalkUP is the researchers’ shorthand for a metropolitan city with a high density of commercial real estate and office space. That gives people easier access to businesses and housing by rail, bus, bikes and on foot. The researchers ranked 30 of the largest metropolitan areas in the U.S. in terms of WalkUP. While Detroit came in at 22, they project its rank to improve to 8 by 2025.

Leinberger, the president of LOCUS, a real estate coalition that advocates walkable urbanism, believes the concept is the next step toward a sustainable economy.

“It is where the knowledge economy wants to learn and do business,” he said. “That’s important for Michigan because we often hear about the industrial economy. However, the current economic age is driven by a knowledge’ economy.

“What’s next is the experienced economy. Workers and businesses want to be in walkable urban places.”

Only three cities adjacent to the Great Lakes were ranked. Cleveland came in at 10 and Chicago was 5 in terms of ranking for WalkUPs.

High-ranking WalkUP cities must contain 1.4 million square feet or more of office space and 340,000 square feet or more of retail space. They must have a “walk score” value at 70 percent. Walk Score is a measure created by the Brookings Institute to indicate the percentage of acreage within the city that is walkable.

Leinberger predicts Detroit will climb into the top 10 due to a recent spike in its market share calculated by Fair Share Index. Fair Share Index measures the rate at which rentable space is filled over a period of time compared to WalkUP market share.

“In Detroit, walkable urban market share in recent years since 2010 [office space only] is growing 77 percent faster than the market as a whole,” said Leinberger. “This is a great signal that Detroit has turned the corner on sprawl.”

The education of residents and the gross domestic product per capita correlates with higher walkable rankings, the researchers said.

Cities that are more walkable have at least 40 percent of the population over age 25 with a bachelor’s degree and the gross domestic product per capita averages $60,400.

Development of the central cities, as well as the suburbs, will determine the expansion of WalkUPs, the researchers said. Washington D.C., New York City, Boston, San Francisco and Chicago ranked as the top 5 WalkUPs because local government support was available and real estate developers advocated walkable urban development.

Walkable urbanism not only pushes the economy forward, it also reduces greenhouse gas emissions by minimizing vehicle usage, Leinberger said. He believes this is the solution to environmental sustainability in America.

By eliminating sprawl and migrating toward a concentrated society, each city has the potential to be economically and environmentally sound, he said.

Information about walkable urbanism, LOCUS, programs and the other coalitions involved with community design is here.