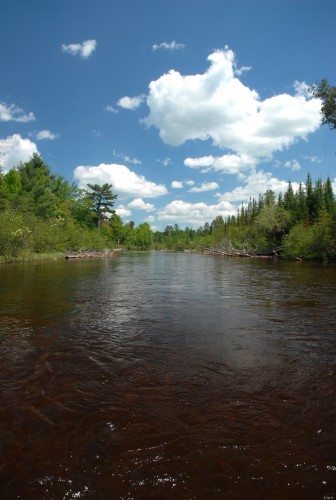 The Au Sable River in Crawford County, Mich., is in the center of a current aquaculture debate in Michigan. Image: John Russell of Great Lakes Images.

A recent disagreement about an Au Sable River hatchery expansion shows why Michigan aquaculture is stagnant when it could be a billion dollar industry, proponents say.

But critics claim the commercial raising of fish on a popular trout stream threatens the river’s health and an economy that has already grown up around it.

The debate heated up this spring after entrepreneur Dan Vogler applied to the  Michigan Department of Environmental Quality, or DEQ, to increase fish production for commercial use at a hatchery on the Au Sable River near Grayling in Crawford County, Mich. Vogler co-owns and manages Harrietta Hills Trout Farm in Harrietta, Mich.

The hatchery was established in 1914 to reintroduce the Grayling fish back into the Au Sable, Vogler said. In the 1920s it was sold to the Michigan Department of Natural Resources and used as a tourist attraction for visitors to view and feed fish. By the 1980s it was sold to Crawford County and run by various groups that tried but failed to keep it profitable. 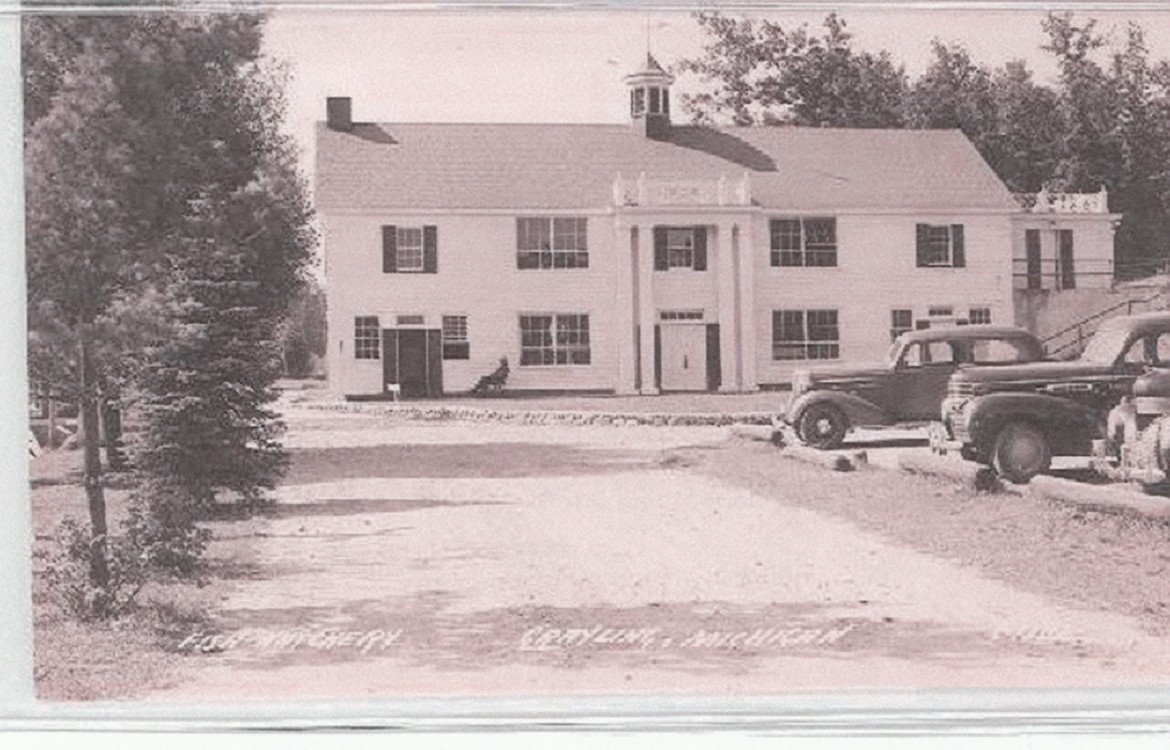 In 2012, the county asked Vogler to step in to keep it open, Vogler said.  “The only real way to be viable, from a business standpoint, is to run a hatchery to produce fish there year round,” he said.

As the summer season ramps up, so are opponents and advocates of Vogler’s plan. State officials weighing the issue say they are unsure when a decision will be made.

Because the world’s natural fisheries are declining, aquaculture is the key to meet the world’s growing fish consumption needs, Vogler said.

“In a state that sits on 20 percent of the world’s fresh water, we have a (duty) to devote our resources in an integrated and responsible manner in order to produce that food,” he said.

Despite the need, many people distrust  aquaculture and fear environmental risks, said Jim Diana, director of Michigan Sea Grant and a professor of fisheries and aquaculture at the University of Michigan who has led six different trout research projects on the Au Sable River. 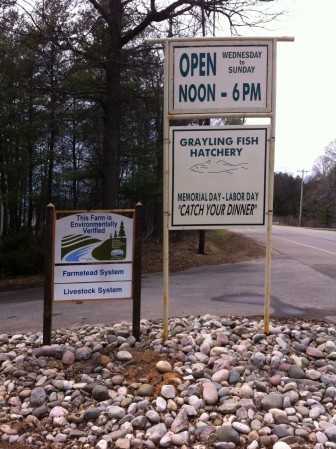 The Grayling Fish Hatchery is open for the season in Grayling, Mich. Dan Vogler is wanting to eventually increase the farm’s fish production to 300,000 pounds per year. Image: Dan Vogler.

Diana said the risks of aquaculture are comparable to those of traditional agriculture, but because it is a comparatively new production system, people feel it may be  unsafe.

“We have a really overblown feeling of aquaculture and that’s the reason why every time anyone wants to do something, someone fights it,” he said.

While aquaculture has potential, there is a right and a wrong way to expand, said Bruce Pregler, president of Anglers of the Au Sable, an environmental conservation organization that focuses on protecting the river’s livelihood and ecosystem health. The group opposes the granting of this permit and claims there are great potential risks from the hatchery to the river’s well-being and existing economy. Risks of pollution and diseases are often related to aquaculture, Pregler said.

“We understand capitalism and tourism in Grayling, but do it safely and responsibly,” he said.

The anglers worry the hatchery’s increase in commercial fish production could result in  fish with whirling disease which deforms their skeleton, causing them to swim in a “whirling” motion that makes them vulnerable to predators and have difficulty feeding. The fear is that the disease could contaminate the wild trout in the Au Sable.

The proposed hatchery is not a closed system, but a flow-through system that discharges right into the river.

Another concern is an increase of phosphorus from fish waste. Excessive phosphorus  could enrich nutrients in the river that aid the whirling disease parasite and make the clear river murky with algae, Pregler said.

And he questions if the farm would harm the already established trout-fishing economy along the Au Sable River, detracting from what brings anglers to the region and harming riverfront property values if environmental woes are justified.

Ultimately, the anglers are also asking for more oversight of Vogler and the hatchery said Steve Sendek, a retired DNR fish biologist who has been advising the anglers organization.

The hatchery would benefit the economy with three full time jobs, plus seasonal employment, Vogler said. He said that his diligence when it comes to regulating discharge and preventing whirling disease is top-notch. At his Harrietta Hills Trout Farm, Vogler is verified by the Michigan Agriculture Environmental Assurance Program which marks his dedication to environmental friendliness. This is a verification that is very difficult to attain, he said.

To limit environmental risks, Anglers of the Au Sable are asking Vogler to only plant disease-free fish, which he said he plans to do. They’ve also asked the DEQ to require a third party to monitor the hatchery’s discharge throughout a continuous 72 hour time period. Right now, only spot sampling is required.

A DEQ official said the agency shares the fishing group’s concerns.  Because the project is unique, it is in no rush to make a decision and wants to make sure to “get it right,” said Brad Wurfel, the agency’s director of communications. It wants to draft a position that would cover everyone’s interests, but foremost protect the environment.

“This is the first time a retired state fish hatchery has been proposed for this kind of use,” Wurfel said. “We’ve got a strong concern about potential discharge that would impact the river. … Our concern is not on the use itself, but on the impact on the environment.”

Diana said the near half-million pounds of fish produced per year from this one farm would not have negative impacts to the river.

“If you had 100 farms dish into the river, you would definitely get that,” Diana said. “Dan Vogler knows his aquaculture and he’s concerned with not creating problems as well.”

Aquaculture is the fastest growing food production system in the world and is responsible for more than half of the seafood consumed, Diana said. Some countries have realized significant economic growth from aquaculture industry.

Michigan could enjoy similar growth, he said. There are about 50 registered fish farms in Michigan.

A three-acre fish farm could contribute greatly to a rural community, while often going unnoticed.

“We have great water and people who understand fish, … we have the farming,” Diana said. “We have the rural areas where the economy has struggled in and (where) some new type of economic industry like aquaculture could be dispersed.”