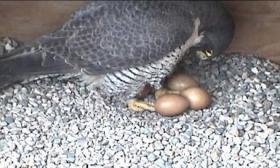 Baby falcons are on the way at the Board of Water and Light’s Eckert electric generating plant. Courtesy of the BWL.

There are many expecting parents around Mid-Michigan, but few will produce offspring as rare as Eckert and Viper’s. The peregrine falcons are waiting for three little ones to hatch, after nesting at the Lansing Board of Water and Light’s Eckert electric generating plant. Although peregrines were removed from the federal endangered species list, they remain listed as an endangered species under Michigan law. Current State speaks with BWL employee Dana Mandeville is the companies “resident falcon expert.” Mandeville says peregrines have been in Lansing since 2002.