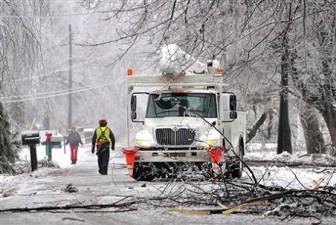 A report by Michigan regulators has found that inadequate tree-trimming by utilities was a significant factor in widespread power outages following an ice storm in December.

The MPSC identifies vegetation management as “the most effective tools in outage avoidance and duration limitation, currently deployed by utilities.” Each year, the commission approves funding in rate cases for distribution system maintenance, which also includes pole replacement and pole-top management.

MPSC directed Consumers and DTE Electric Co. to spend at least what is approved during rate cases on vegetative management. It also directed the utilities to expand pilot programs targeted at tree-trimming outside of the utilities’ rights of way and to increase communication with customers on the dangers of hazardous trees.

The MPSC found that DTE Energy has been more consistent in its vegetative management spending, which since 2009 has hovered around $50 million annually. Consumers, meanwhile, has spent more or less than was budgeted by MPSC, depending on the year. For example, in 2009, Consumers spent $44.2 million on vegetative management, though $34.4 million was approved.

In a report filed with the MPSC on March 24, Consumers said it “takes many factors into account to determine line clearing cycles which will vary depending on growth days per zone, distribution system configuration, voltage type and dominant tree species in the zone.”

Consumers is on a 10-year line-clearing cycle, while DTE’s is five years.

Line clearing has taken on added importance over the past decade, when in 2003 overgrown trees triggered the largest blackout in North American history. Some arborist groups have been encouraging utilities to adopt “integrated vegetative management,” a more holistic approach to line-clearing that emphasizes less environmental degradation and more low-growth tree species.

Late on Dec. 21 and into Dec. 22, an ice storm swept across the mid section of Michigan’s Lower Peninsula, causing nearly 600,000 outages between Consumers and DTE customers. Some power lines were coated with up to an inch of ice. Some customers were without power for up to eight days.

“We found, in general, there was a very good response to the storm and the outage,” MPSC Chairman John Quackenbush said. “But, like anything, there are areas for improvement.”

Burying lines not the solution

In the forested north woods of Wisconsin, Wisconsin Public Services has been calling for a need to bury overhead lines in an effort to improve reliability. As part of a five-year, $222 million project, the company plans to bury more than 1,000 miles of power lines, costing customers about $4 to $5 a month. Opponents say the project is too costly for the relatively few number of customers who will be affected.

In Michigan, underground lines are generally required in new subdivisions and for new commercial and industrial lines in the Lower Peninsula, according to the MPSC.

While the MPSC recommended against burying overhead lines as a solution, if a group of customers wanted to bury lines, an agreement should be reached with the utility “allocating a significant portion of the increased costs to those customers receiving the local benefits, so that all of the costs are not transferred to the entire system’s ratepayers.”

The MPSC also notes that, under such a system, average outage times for those customers “would increase exponentially,” as underground lines are more difficult to repair.

The MPSC is also calling for accelerated investments in distribution automation to minimize the length and duration of outages.

The MPSC said Consumers in particular should have called in more in-state workers and mutual aid for help before the storm hit. It also asked Consumers to report back by Aug. 15 on improvements it has made for handling increased customer call volumes.

The MPSC began its review of the storm on Jan. 8, when it directed DTE and Consumers to file reports within a month over its preparation for the storm, how it handled it and what could have been done differently.

Based on those findings, MPSC staff issued a report on March 10, outlining the series of recommendations. The commission formally approved several recommendations and directives on Friday.

As part of its investigation so far, MPSC is also calling for:

MPSC staff will issue a second report by Oct. 1 showing improvements Consumers and DTE have made and what they plan to do going forward.

MPSC and a muni

Meanwhile, a separate investigation into the municipally owned Lansing Board of Water also found the utility’s failure to follow its own vegetation management policy contributed to the length of the outage. Combined with not following the policy, the report said the BWL’s lack of trained damage assessors, or spotters, and a failed Outage Management system extended the length of the storm by two to three days.

While the BWL is not regulated by the state (it is done so by a mayoral-appointed board of commissioners), the utility’s controversial handling of the same ice storm led Lansing Mayor Virg Bernero to order an external investigation into the utility. The BWL completed its own internal investigation in February. Both reports will be sent to the MPSC for review.

Retired Brig. Gen. Michael McDaniel, who led the investigation, said it was “mind boggling” to also find out about the utility’s “absolute lack of any records during the time of the ice storm itself.”

The 10-member panel made up of Lansing-area citizens met periodically since first convening in January.

Public support for the utility plummeted in the final days of the storm, which carried over into several public forums in the following months. Ratepayers criticized the utility’s lack of preparedness leading up to the storm, particularly its inability to effectively communicate with customers about power outages.