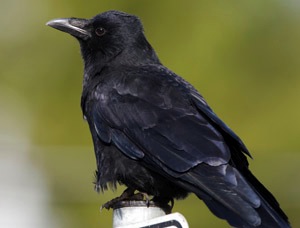 Researchers at Penn State University are trying to chase away crows with laser pointers and pyrotechnic bangers and screamers.

The birds’ excrement is causing unsanitary conditions and they are crowding the campus. But the lingering migratory crows are hard to move.

Wildlife can be stubborn, said Travis Lau, the press secretary at the Pennsylvania Game Commission.

“A reason they might not be moving is because they have easy access to food,” he said.

Crows are attracted by the scraps of food that students leave behind or throw in the garbage.

Pyrotechnic bangers and screamers and laser pointers are the two main methods that the university’s officials used this spring.

Bangers and screamers are like firecrackers and are sometimes called “Bird Bangers.” The laser pointers look like a pen that shines a green light on the crows so they get startled and fly away.

Many more methods were also tried.

The university has to keep changing its approach because the crows adapt to the different methods, said Paul Ruskin, the university’s business operations coordinator.

The university also used fogging machines with smells the crows didn’t like, he said. They stopped when it started to smell so bad that Penn State students and nearby residents couldn’t stand it.

A key question is whether the laser pointers or the pyrotechnic bangers and screamers, work best.

“They both were very effective,” said Ruskin. “The laser pointers were nice because they were quiet, but the crows flew a greater distance with the pyrotechnic bangers and screamers.”

He said university workers pointed the lasers to “razzle dazzle” the crows and get them to fly a short distance off campus. It took a couple of weeks to keep them moving.

The pyrotechnic bangers and screamers were launched by a flare gun and made a big noise. The only problem was that the noise was so loud it disturbed dogs and nearby residents..

Ruskin said the university would use both methods again because it got the crows off campus. Both are safe and don’t harm the crows, but the laser pointers are the safest of the two.

“The only difficulty with the laser pointers is the Federal Aviation Administration (FAA) is concerned they are going to bring down airplanes,” he said. “The laser pointers are not even remotely close to being strong enough to take down planes, but until the FAA understands that, we will not be using the laser pointers.”

Most of the crows on campus have migrated away–at least for now– due to the methods used and the warmer weather.

The crows would just find another location to roost until they are relocated again, said Scott Winterstein, professor of wildlife biology at Michigan State University. It is just moving the problem from one place to another.