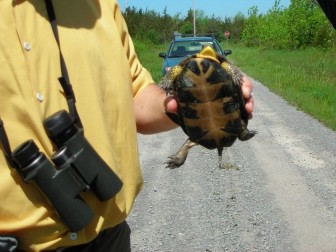 The Ontario Divisional Court has ruled in favor of a wind turbine project that put groups with environmental interests at odds with each other.

On one side is an alternative energy project. On the other is protection of a threatened turtle species and fragile soil.

The court decision — now on hold pending a further appeal — would allow Ostrander to start construction after the Environmental Review Tribunal revoked the Ministry’s approval.

PECFN relied on the Endangered Species Act to halt the project. The act requires proof of harm to human health, or serious and irreversible harm to plant or animal life or the environment due to the construction of the wind farm.

The tribunal revoked Ostrander’s approval, saying that the project would endanger the Blanding’s turtle, a threatened species in Ontario since 2004.

The project is planned for a site 15 kilometers, or nine miles south of Picton.

Cheryl Anderson, a member of the executive board of PECFN said that her organization is appealing the court’s decision. 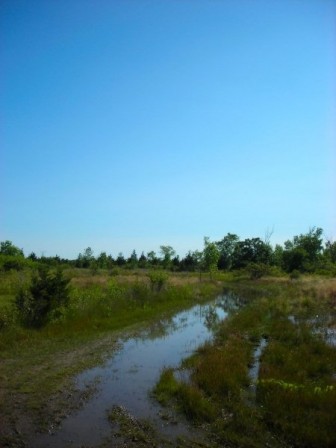 “Our appeal will be based on our belief that the arguments given by the divisional court were incorrect,” she said.

The Ontario Appeal Court has granted a stay of construction until it decides whether to accept the case. During this process, Ostrander can do no construction.

“That’s what we have achieved, and we are very happy about that,” Anderson said.

“There are nine turbines and access roads planned. If the turbines go in, then the habitat will be destroyed,” said Anderson. “The habitat is alvar, wetland and quite a bit of meadow, especially the wetland because it is the home of the Blanding’s turtle.”

Alvar is a fragile type of topsoil.

Mike Lord, president of the company, said the project was started in 2006 at the invitation of the Ontario government. The province wanted to develop a wind energy facility on Crown Land in a remote area previously used as a bombing practice range by Canadian Armed Forces.

Crown Land is owned by the province.

Lord said the planned project will produce 2.5 megawatts (MW) of energy, for a total potential production of 22.5 MW, or enough to power almost 6,000 homes. He said the wind farm would cost $60 million (Canadian) to build and about $3 million per year to operate.

Christopher Keen, a county resident, said Ostrander Point was used as a gunnery range at the beginning of World War II and, to his knowledge, has not been used for any military purposes since then. 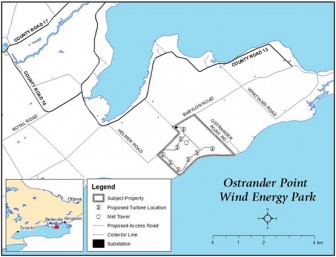 A map of Ostrander Point. Photo from Gilead Power Inc.

Keen has lived a mile away from Ostrander Point for 10 years. He said that he and a majority of the community are opposed to the project.

“There was a referendum two summers ago, and the majority of people who voted were against it,” said Keen. “This was organized by some members of the community who could have been opposed for a number of reasons.”

“This is the first time the province has said Crown Land can be used for wind turbines,” said Keen. “I feel strongly about it because we have an Endangered Species Act, and either we follow it or we don’t.”

After the divisional court heard the case in February, it ruled in favor of Ostrander saying the tribunal had wrongly revoked the approval.

Since the PECFN didn’t have data about the amount of Blanding’s turtle mortality due to vehicles, it did not prove the project would jeopardize the species, the court said.

The Ministry of Environment declined to be interviewed for this story.

Lord said, “The company has gone above and beyond to ensure the Ostrander Point project is a model for responsible wind energy development. Gilead Power has followed the rules for applying for, planning and managing the development of a renewable energy project in accordance with the province’s requirements.”

Both the tribunal and the court rejected challenges to the project based on possible adverse impacts on the fragile alvar topsoil and human health.

Anderson said, “This is kind of a big story — it’s not just the turtles but they won us the appeal. This place is important also for migratory birds, bats and monarch butterflies.”

3 thoughts on “Turtles vs. turbines”