An appeals court has refused to order a local government to extend a special use permit for a proposed multimillion-dollar 29-turbine wind farm in Western New York.

Allegany Wind LLC unsuccessfully sought a one-year extension of its permit for the controversial project in the town of Allegany, in Cattaraugus County just north of the Pennsylvania border.

When the original permit was issued in July 2011, the town notified the company that the approval would expire if construction has not commenced within a year. The town extended the deadline because of a lawsuit by project opponents, Concerned Citizens of Cattaraugus.

The citizens group lost that challenge in November 2011.

The company requested the extension because it was considering the use of alternative turbine models, the court decision said. However, the town’s consultant said the proposed alternative turbines would violate local noise setback requirements.

The company sued when the board rejected the extension. It claimed that the town acted arbitrarily and that the permit period should have been put on hold until the citizen group’s lawsuit ended.

It is only fair  after the company expended over $4 million and several years of its time to secure the permits  that the company should be afforded sufficient time for the construction phase, Allegany Winds argued in court papers.

Construction in this instance is not a simple proposition, its brief continued. Unlike a typical commercial building which has been granted a special use permit and site plan approval, this wind energy development is situated on an area comprising over 9,000 acres. The project also involves multiple landowners and construction of access roads and foundations in 29 locations. 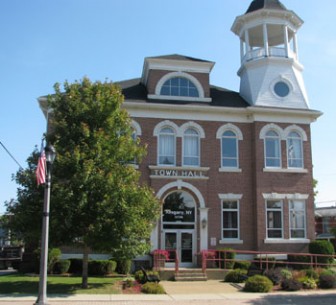 But the Appellate Division of the state Supreme Court sided with the town.

First, the court said that the company’s plan to use a different type of turbine was a material change in circumstance that supported the town’s decision.

The three-judge panel also said the citizens group’s lawsuit was not the primary reason for the company’s failure to proceed with the project in a timely manner. Instead, the company had told the press that it was delaying construction until it learned if Congress would extend the federal Production Tax Credit.

A lawyer for the company, J. Michael Naughton of Albany, said he cannot comment on Allegany Winds’ future plans.

Buffalo attorney Daniel Spitzer, who represents the town of Allegany, said, The town is pleased that the court recognized that the town acted properly and professionally throughout this process and that its decision was appropriate.

Spitzer said no alternative proposal is currently before the town.