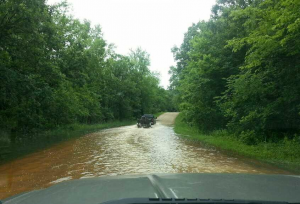 State and local officials in Michigan are bracing for spring floods after record-breaking snowfalls in some areas.

“Normally there would be around a 20 percent chance of Michigan communities reaching flood level this time of year, but the chances this year are as high as 90 percent especially in southwest Michigan,” said Mark Sekelsky, meteorologist at the National Weather Service Grand Rapids office.

The risks are high: A 50 percent to 90 percent chance of flooding statewide this year, according to the National Weather Service.

“There has been a large snowfall and a greater snowpack than usual further into the year so the risk of flood is greater,” said Ron Leix, public information officer for the Michigan State Police.

There has been roughly 2 to 6 inches of water in snowpack, an amount that we might reach every 25 to 30 years, Sekelsky said.

“There is greater risk of flooding if Michigan receives greater snowfall, heavy rain and warm temperature that leads to rapid melting. The risk is minimized if there is cooler weather and the snow gets a chance to melt gradually.”

The Michigan State Police has a Michigan Emergency Management Plan for floods and other natural disasters that is updated annually.

“It all starts at the local level,” Leix said. “Every county is required to have an emergency management coordinator who would respond to a local flood.”

If a community runs out of support for emergency workers and money for contracts for equipment to handle the flood, it asks Gov. Rick Snyder to declare a state of emergency, Leix said. Such a declaration depends on health problems and property damage.

“We come in as a supplement to assist and work with local emergency coordinators if the problem is too big for them to handle,” Leix said.

First priority is public health and safety, Leix said. Widespread threat to property, such as roads and buildings comes after.

E-coli is a bacteria that is often seen in flood water, said Lisa LaPlante, public information officer for Kent County. It  causes gastrointestinal illness such as vomiting and diarrhea.

After severe flooding  last year, Kent County is one of many counties preparing for floods this year.

“Last year we saw a lot of property damage,” LaPlante said. “Fortunately we didn’t see any injuries or death from the flooding but numerous water rescues occurred because people decided to do recreational activities in the water even though they were advised not to.”

This year the county officials are making sure they have enough sandbags to block the flooding in extreme cases and barricades to close down flooded roads, LaPlante said.  The sandbags are easily accessible and have been ordered for this year.

“We are prepared to shelter people who have to evacuate their homes,” said Alison Bono, regional director of communications at American Red Cross. “We have agreements with Grand Ledge High School, Trinity Church and other organizations that could properly house people.”

The most popular form of flood anticipation seems to be getting the message out to locals on what to do in case of a flood.

“We’ve sent out messages to our residents on preparing for flood conditions and will be working with human services and response agencies to discuss how they will be responding in case of a flood,” LaPlante said.

Lake County has also put out an alert to its residents that flooding for the county may be higher than usual this spring, said Michael Applewhite, Lake County Emergency Management director.

The county does not have an official level of what they consider normal flooding but expects this year’s to be higher due to warming temperature, Applewhite said.

“We have a couple dams in the county to control the flooding,” he said. “We had the Department of Environmental Quality come out and inspect the dam conditions and how many houses downstream of the dams are in low lying area.”

Recommended preparations include having a family disaster plan of where your family will meet if you evacuate your home and a contact that doesn’t live in the area, backing up all important computer documents, keeping track of medical and financial records and keeping valuables away from rooms likely to flood.

Minor flooding is considered to be up to 18 feet and moderate is 21 feet.

The chance of flooding depends on a balance of time, temperature and rainfall, Leix said.