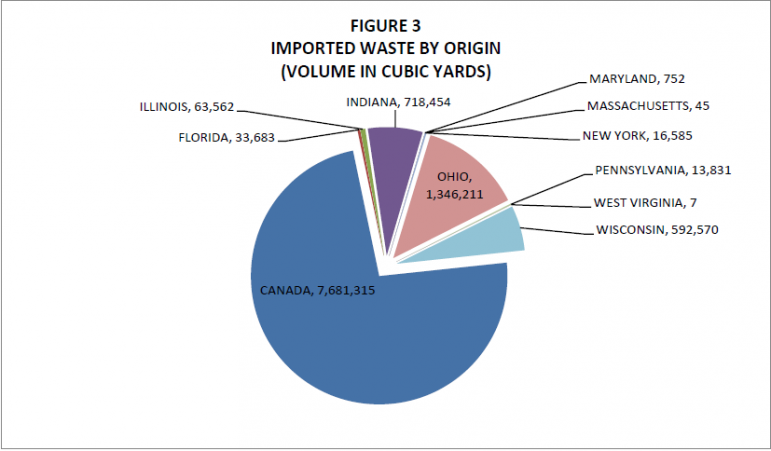 Despite a slight increase in Michigan’s population, 2013 witnessed a decline of 0.5 percent in solid waste generated in the state, continuing a 10-year  trend, according to a report by the Department of Environmental Quality (DEQ).

And the state still has almost three decades’ worth of landfill capacity, the report said.

Waste imported from other states and Canada increased by more than 8 percent.

Canada is the largest source of imported trash, accounting for about 17 percent of the total waste landfilled in Michigan last year, according to the report.

“Compared with residential waste, we are receiving more commercial and industrial waste from our neighbor,” Canada, said Brad Wurfel, the communications director of DEQ, and that may signify increased economic activities from the sources.

The amount and sources of imported waste largely depend on the market, Wurfel said. Other states recognize that it is cheaper to transport and dispose of solid waste in Michigan landfills.

Other factors that influence the flow of waste include disposal capabilities and types of landfills. According to the Michigan Waste Industries Association, the state “relies on Canada to process all types of electronic scrap and recycled paper” and exports “significant quantities of hazardous, low-level radioactive and medical waste to other states.”

Horton said the most important information from the DEQ report is the trend of a decline in all sources of solid waste generated in Michigan and nationally.

“If you look at one year, you don’t see a very good snapshot of what’s really going on, but if you go back and look at the report 10 years ago, you’ll see some really important trends,” he said. “Since 2004, waste generated in Michigan is down about 30 percent, and since 2006, waste coming from Canada is also down about 30 percent.”

Dan Batts, president of the Michigan Waste Industry Association, and Wurfel both said recycling practices for managing solid waste contribute to the decline in the amount produced.

“Our association membership has been promoting curbside recycling throughout the state,” Batts said. As a result, the amount of waste “continues to decline because of those programs that we are putting in place.”

And Horton said, “It is a very encouraging picture. You see that more and more material is being diverted or recycled or used for other purposes.”

Horton said he used to take his music collection around in a car because they were heavy records with album covers, and when people threw albums away, it produced a lot of waste. “Now, any music devices today can hold thousands of songs.”

And twenty years ago, people paid their bills and communicated much more by mail, and those checks and envelopes generated millions of pounds of waste paper every year. Now, those functions are done increasingly online.

“We are not generating the types of waste that we used to generate in the past,” said Horton.

Horton also talked about environmental practices on the industrial and commercial side.

Many companies recognize that “many of the materials they generate have value” and try not to dispose of them underground. For example, more than 50 percent of General Motors manufacturing facilities are landfill-free, he said

A number of companies and municipal governments employ sustainability managers, positions that didn’t exist a few years ago, said Horton.

All these approaches combined contribute to the steady decline of solid waste sent to landfills.

“That happens across the country, not just in the Michigan area.” Horton said.

Across America, a number of states including Michigan have passed legislation requiring that some materials, such as electronics — the fastest-growing type of waste material — have to be recycled,” Horton said.

On the other hand, more people want better solutions for waste disposal, and such change in consumer choices has encouraged many companies to put their products in recyclable packages, he said.

Recent programs like green building initiatives and Leadership in Energy & Environmental Design (LEED) programs in construction reflect the sustainable development trend that influences all types of solid waste, he said.

Horton said those reasons explain why quite a few landfills have closed in Michigan, “and it is likely we may continue to see a number of facilities close as the demand for disposal continues to decline.

“Clearly we are in the cycle now that the amount of materials going to be disposed of in landfills is not going to be the primary choice for managing or processing solid waste in the future.”

However, Matt Flechter, a recycling and composting specialist at DEQ, said the state doesn’t yet have a recycling measurement system to track exactly how much waste is recycled, reused or disposed of in other ways.