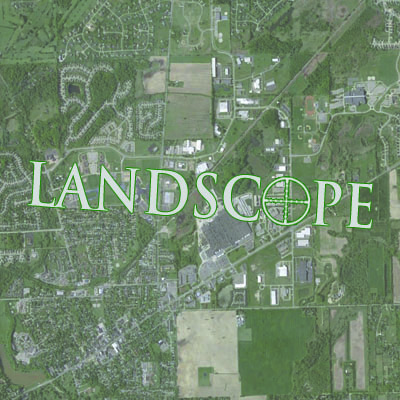 This story is part of Great Lakes Echo’s ‘Landscope’ series.

Over the past 70 years, Saline has grown from a small farming town south of Ann Arbor to a constantly growing midsized community with a healthy city center and a number of new schools.

Since the mid 1990s, Saline has built four new schools to meet its growing population.

The U.S. Census Bureau reports that the city’s population has  increased about 33 percent over the past two decades.

These images from Michigan State University’s aerial imagery archive trace   Saline’s growth  from a rural village in 1940 to a bustling community 70 years later. 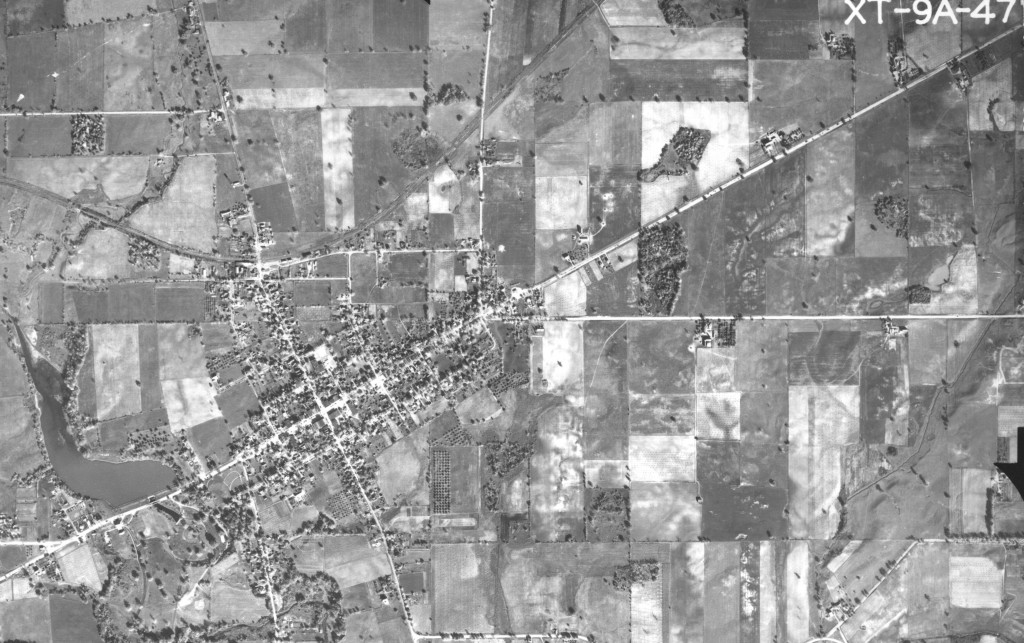 Saline, 1940: In the lower left of this aerial photo from 1940, you’ll see Mill Pond. The main road on the south end of the pond is Michigan Avenue, which intersects with Ann Arbor-Saline road just to the east to form the city’s center. 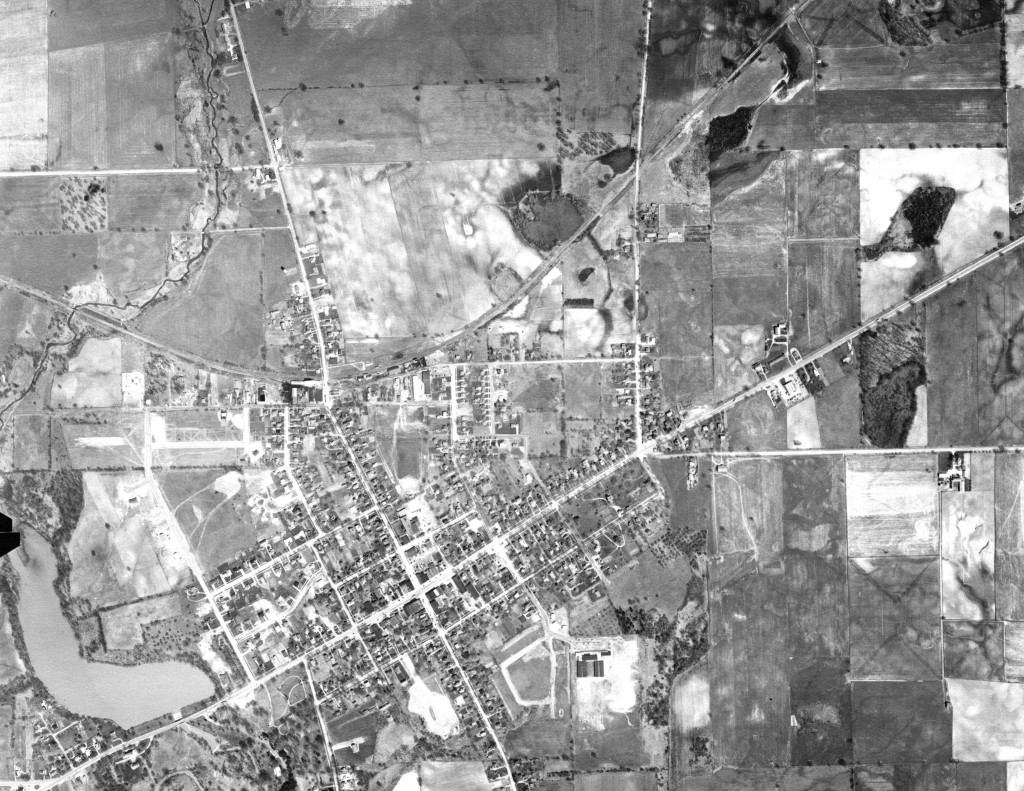 Saline, 1956: Sixteen years later, the city shows small signs of growth. The land next to the southeast corner of Mill Pond has been filled in by new housing, and down Michigan Ave. to the east of the city’s center a small shopping center has developed. 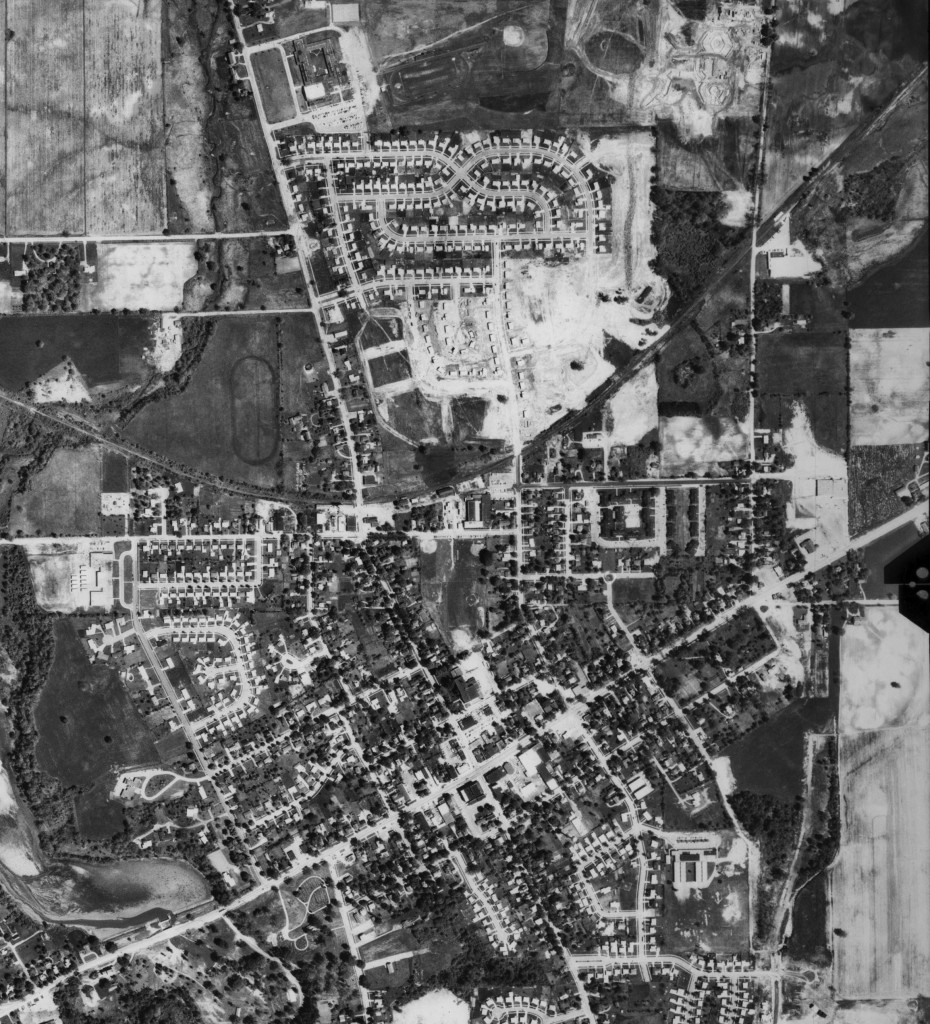 Saline, 1969: The obvious difference here is the new neighborhood that’s developed north of the city’s center. Though obviously not yet completed, this is the first significant expansion away from the center of Saline. Just a little further north and at the top of the picture is the city’s newest school. East of that is Saline’s former high school under construction. 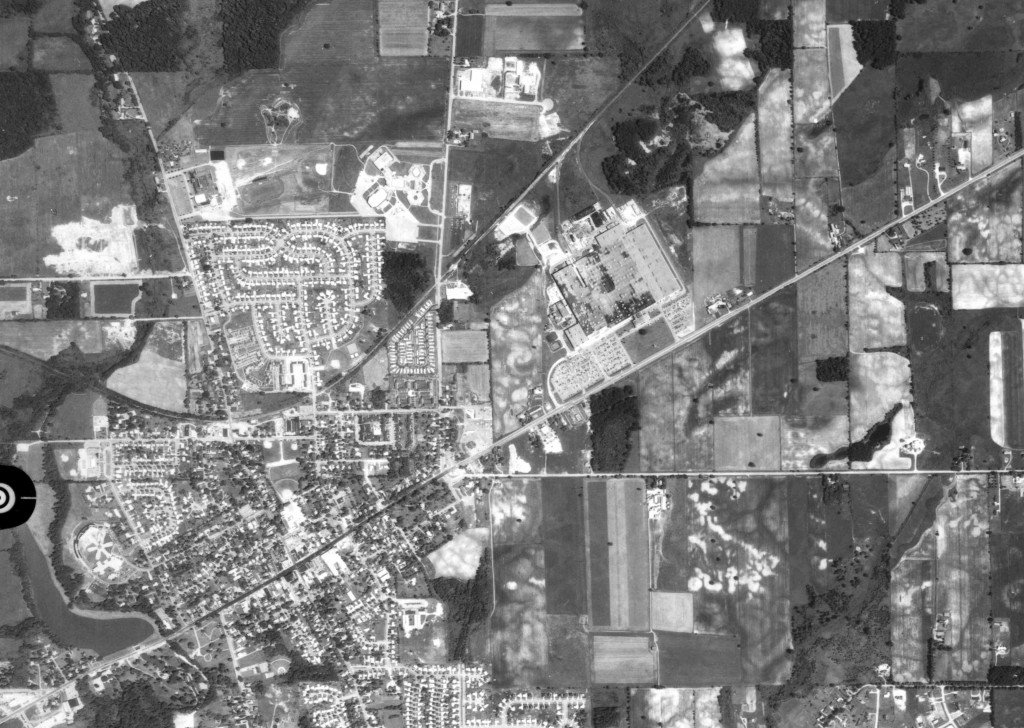 Saline, 1978: In this zoomed out photo, construction has finished on both schools on the north end of the town. Saline Middle School is to the west and the high school is to the east. The shopping center on Saline’s east end has grown significantly, but it is still surrounded largely by farmland. 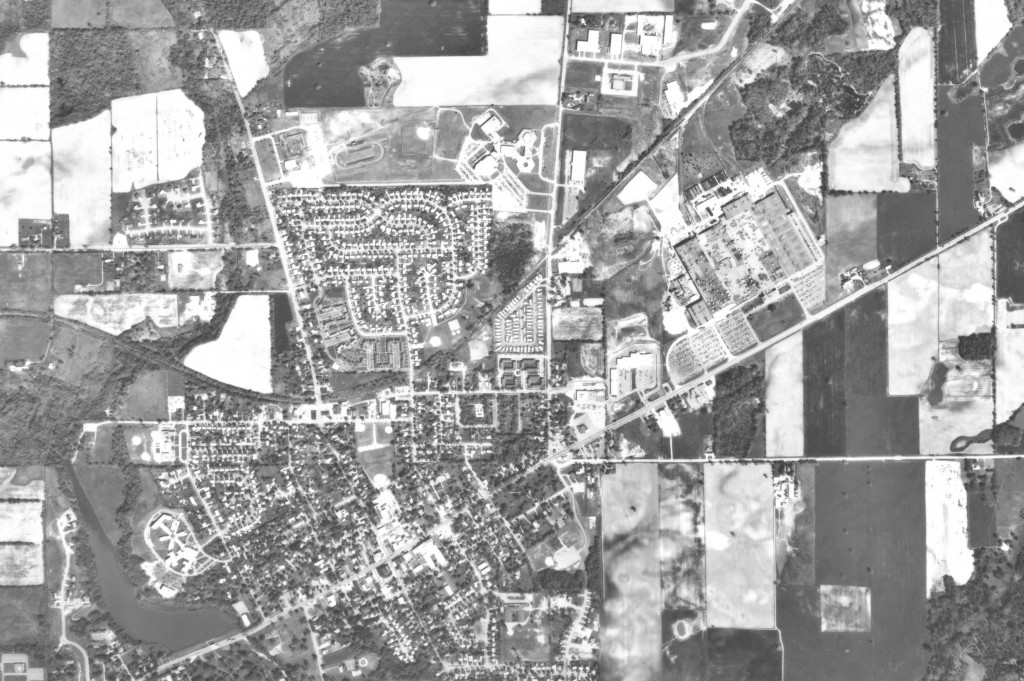 Saline, 1985: The city hasn’t had notable growth in seven years, though there is a new industrial park northeast of Saline High School. 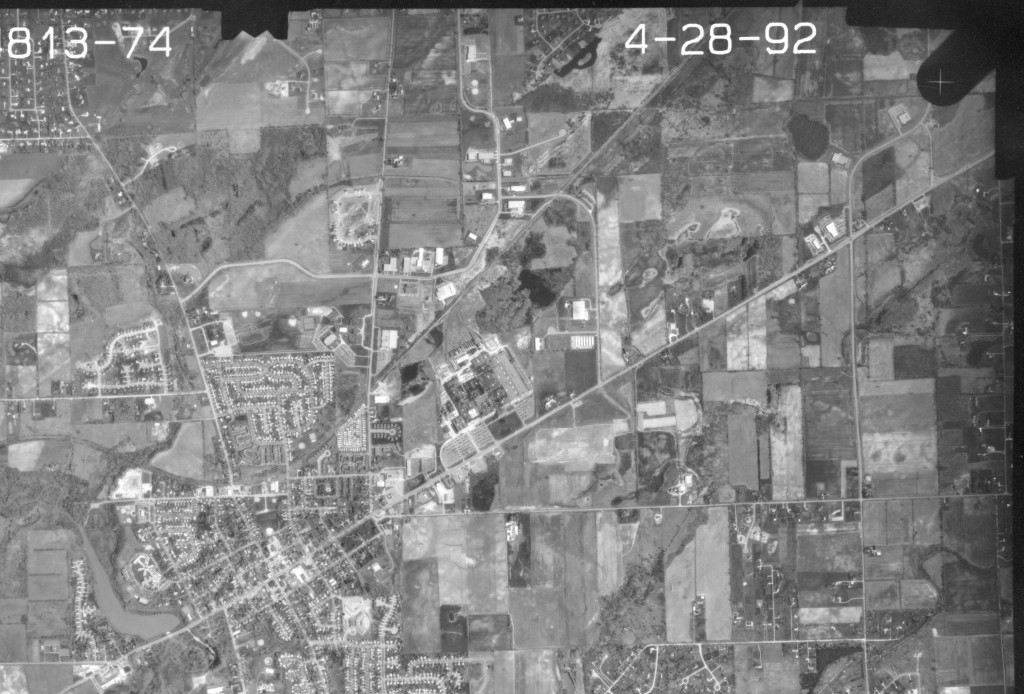 Saline, 1992: Woodland Drive has been constructed north of Saline’s high school and middle school. Though there is not much development surrounding it at the time of this picture, that is about to change. 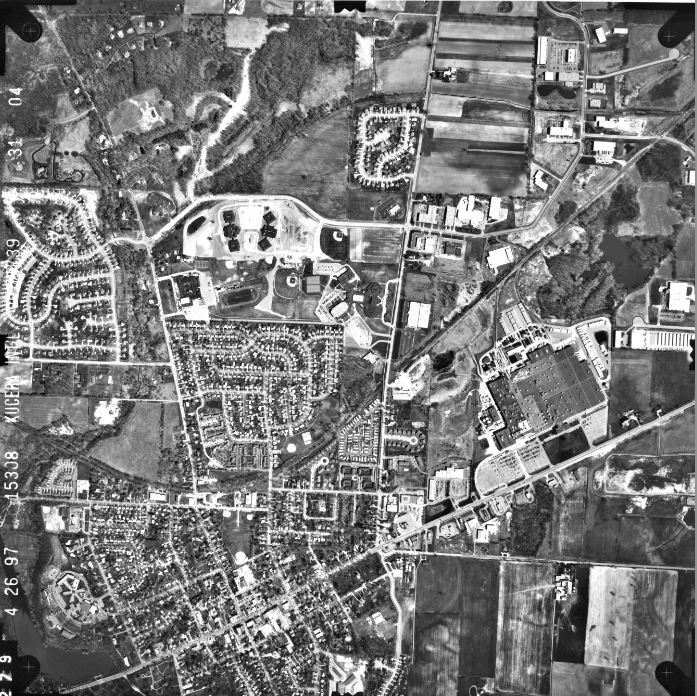 Saline, 1997: Two new schools have popped up on Woodland drive’s south end. Heritage and Woodland Meadows were two elementary schools built in the mid-1990s for a growing population. Just across the street, you’ll see the road construction that is about to develop into a major neighborhood. 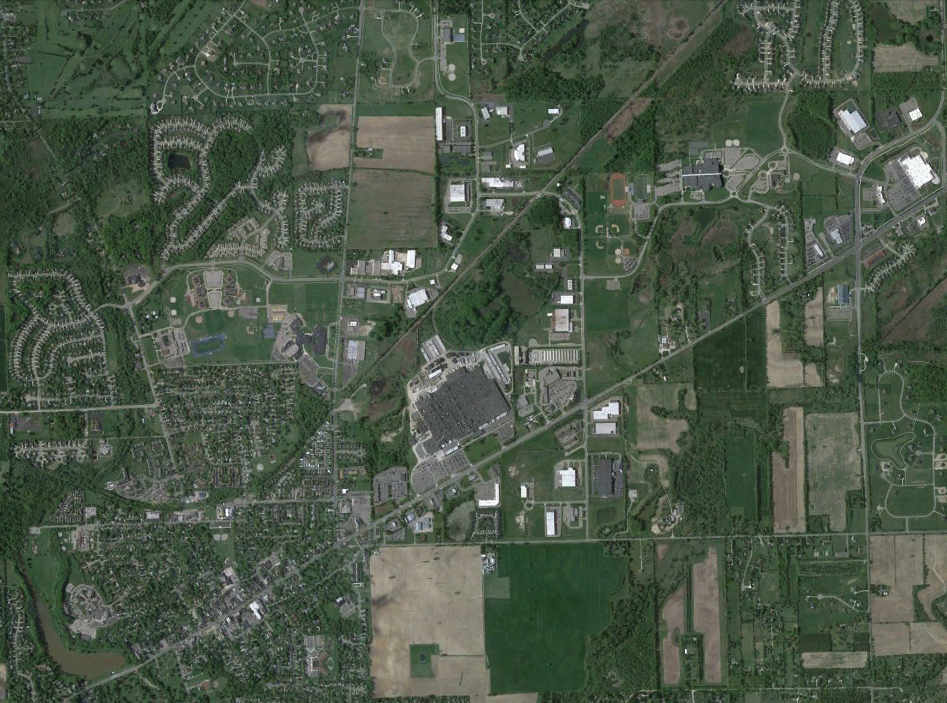 Saline, 2010: Saline has grown significantly in just 13 years. The neighborhood that was in the very early stages of construction in 1997 has now taken over the north end of Woodland Drive. Eastward down Michigan Avenue, there is now a completely new high school. While it may not look much larger than Saline’s former high school, this new building had three stories; and, when it opened in 2005, it was the largest high school by square footage in the state of Michigan.