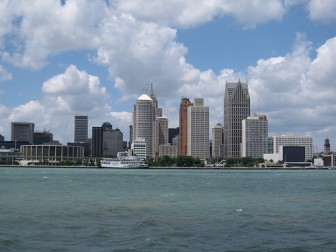 Some Michigan cities are bracing for a climate change.

In Detroit, six groups are planning to reduce the city’s carbon footprint.

The Detroit Climate Action Collaborative is one of several efforts by cities to prepare for a warming climate linked to fossil fuel emissions.

Grand Rapids, Ann Arbor, Marquette and Ludington are among those planning for climate trends that they are already seeing, said Luke Forest, program coordinator at the Michigan Municipal League.

By the end of the century, Detroit will experience from 36 to 72 days above 90 degrees and 23 days above 100 degrees, with an expected rate of over 700 heat-related deaths, said Kimberly Hill Knott, project director for the Detroit climate collaborative.

“There is a lot more human activity in urban areas and the asphalt in the roads traps heat, making heat waves in places like Detroit much more intense,” Knott said. “Right now we are looking at cooling centers in our most vulnerable communities and making sure there are enough.”

Grand Rapids has developed a five-year climate change plan, led by Alibasic, which has been in place for three years

“We have looked at seasonal change in temperature that projected occurrences of extreme weather and have seen more intense storms and consecutive days of high heat in 2012 and 2013,”Alibasic said.

Detroit is also measuring energy use and researching where it can cut the emission of greenhouse gasses, said Knott.

About 51 percent of Grand Rapid’s targets identified in the city’s plan are complete and 48 percent in progress, said Alibasic.

“We don’t just stop trying to be more energy efficient or build more renewable resources,” he said. “It helps not only the city but the environment as well.”

An increase of extreme weather such as heavy rain is expected with climate change. As a result, Grand Rapids has been evaluating the city sewers’ capacity to handle storm water runoff, said Rep. Winnie Brinks, D-Grand Rapids.

“Last year we had a very serious flood and that was one of the things that pushed our system of preparedness,” Brinks said. “In the last couple of decades we have really worked on replacing our sewage system and keeping storm runoff separate from household waste, which is good for keeping contaminants out of the river and reduces the stress on our water processing.”

Storm water flooding has been on the radar for a lot of Michigan communities, Forest said. Sewers are updated as needed and when the cost becomes manageable.

It’s a worry in Detroit.

“Our projection shows increased precipitation which will impact the infrastructure of Detroit and the quality of life for its residents because of all the flooding,” Knott said. “We are concerned for the impact on bridges, streets, and buildings for an already financially troubled city.”

Michigan Sea Grant received a grant to assist marina and harbor operators in Great Lakes communities in preparing for climate change.  The project is funded by the Great Lakes Integrated Science and Assessment Center operated by Michigan State University and the University of Michigan.  The project will identify problems, identify solutions, and develop and online training segment for marina operators.

Not all Michigan cities are able to prepare.

“Some are too busy with day-to-day concerns to worry about it, especially with cities that have lost budget capacity in the last several years,” Forest said.