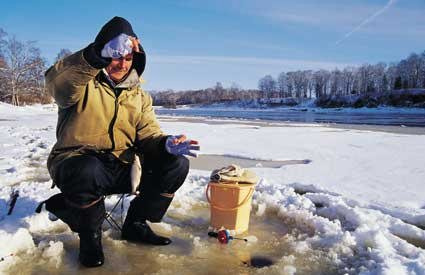 The polar vortex might have excited the lines of Michigan anglers for now, but it may not be so good in the long run. Photo: Flickr/CC.

In a few years, Michigan anglers might have the polar vortex to thank for good hauls.

But in a few months, they might have it to blame for particularly disappointing catches.

Fish experts are keeping a close eye on how winter conditions progress, a clue to how fish populations in the Great Lakes and Michigan’s inland lakes will fare.

The recent cold and resulting ice might give some fish eggs a better chance of survival, Michael Hoff, U.S. Fish and Wildlife Service fish biologist, said. But other fish could die in droves due to lack of oxygen mixed with other stressors.

For now, the ice is good for fishing.

“Muskegon Lake is just covered with ice fisherman – it’s like a bunch of cities out there,” Thorstenson said. “They’re getting good catches, plenty of fish and some have been catching good-sized fish.”

Some ice fishers were disappointed they couldn’t get out on the lakes sooner when the cold weather hit because of safety issues, said Michigan United Conservation Clubs Resource Policy Manager Amy Trotter.

Fishers might be bunched into city-like arrangements on the ice where fish are abundant because the ice restricts the fish’s environment, leaving them in closer quarters, said Cheryl Murphy, Michigan State University assistant professor in the Department of Fisheries and Wildlife.

Murphy said the cold temperatures also mean all processes in a fish’s system slow down so they move less and eat less, although they might bite at food dangling directly in front of them.

The longer-term impacts of all that ice on fish are mixed.

Without an early thaw, fish in inland lakes risk winterkill, a phenomenon that causes suffocation because ice blocks oxygen from the water, Hoff said.

Michigan has more than 11,000 inland lakes. Fishing, a popular Michigan pastime, has added billions to the state’s economy, according to the Michigan Department of Natural Resources. In 2011, Michigan anglers spent $2.4 billion on trip and equipment costs, and contributed more than $11.2 million in federal funds to conservation efforts, the agency reports.

Hoff said the Great Lakes likely are not at risk, despite having the highest reported ice coverage in early January in 20 years, according to the Canadian Ice Service.

“The effects will be really significant in the ecosystem and in the food web,” Hoff said. “It will take several years for the population to rebuild in the lake.”

While automated water pumps or air pumps could be used to create some relief in small areas of lakes, Hoff said costs for these pumps add up. Larger lakes would need several to make any impact.

Popular fish such as walleye and bass are least tolerant of low oxygen and more likely to die in these conditions, Hoff said. In addition, after a year or so, anglers might be catching much smaller fish, as adult survivors of the winterkill will have just begun repopulating the lakes with baby fish.

But the good news with the cold weather now is that Great Lakes whitefish likely will thrive in a few years if conditions persist.

Lynch, who researched the effects of climate change and weather conditions on lake whitefish, suggests that whitefish eggs laid in the fall are more likely to reach maturity if ice protects them, particularly if laid in sand.

But because of the time it takes for lake whitefish to mature, it might be three or four years before anglers notice an improved haul, she said.

Thorstenson said while he has noticed small reductions in fish after particularly icy winters in the past, winterkill doesn’t concern him because he and other anglers always catch some fish.

One thought on “Cold weather anglers flock to thick ice; effects of ice on fish mixed”