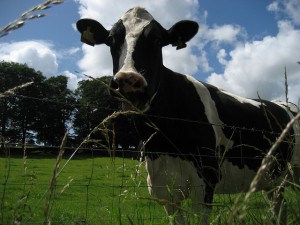 To paraphrase Shakespeare, would manure by any other name smell as sweet?

For the Wisconsin Court of Appeals, that was the question.

Here’s the dilemma: Dairy farmers Robert and Jane Falk of West Bend consider the manure produced by their 600-cow herd a valuable fertilizer. Their neighbors contend that the manure spread on the Falks’ 1,670 acres is a dangerous pollutant. And the Falks’ insurance company argues manure is a pollutant, so the neighbors’ claims against the Falks aren’t covered by its farm-owners liability policy.

In a unanimous decision, a three-judge appeals panel recently ruled that manure is, well, more than an offensive pile of crap and that Wilson Mutual Insurance Co. must defend the Falks against the neighbors’ claims.

The insurance company is asking the Wisconsin Supreme Court to review the case, said its lawyer, Ryan Graff of Manitowoc.

Writing for the appeals court, Judge Paul Reilly said, “Manure is a matter of perspective: While an average person may consider manure to be ‘waste,’ a farmer sees manure as liquid gold,”

In early 2011, the Falks spread liquid manure on their fields under a nutrient management plan approved by the Washington County Land and Water Conservation Division, the decision said.

But a few months later, the state Department of Natural Resources notified the Falks that the manure had contaminated some neighbors’ wells and polluted a local aquifer, saying, “Your neighbors have been exposed to potentially lethal pollutants.”

Some of the neighbors were eligible for DNR grants to fix or replace their contaminated wells. However, others didn’t qualify for the state program and “their wells remain unusable,” according to legal papers.

In addition, a neighbor’s child was diagnosed with an infection from tainted water requiring surgery to remove the bacteria from his neck and throat, legal papers said.

The Falks notified the insurance company of the claims. The insurer denied responsibility and sued the Falks, arguing that it wasn’t liable under the policy’s pollution exclusion.

A lower court judge sided with the insurance company, but the Court of Appeals disagreed.

“Manure has long been a normal and necessary part of the operation of a dairy farm,” the appeals court said.

“The pollution exclusion in Wilson Mutual’s policy does not apply to manure used as a fertilizer on a farm,” it held. “A reasonable farmer would not consider manure to be a ‘pollutant,’ an ‘irritant,’ a ‘contaminant’ or `waste.’

The court also noted that milk isn’t a pollutant although it, like manure, “can cause irritation or contamination” if used improperly.

The decision doesn’t mean that manure isn’t a pollutant in other circumstances, however.

For example, the Milwaukee Journal Sentinel recently reported how DNR records showed more than 1 million gallons of manure had spilled from livestock operations. That was “the largest volume of manure spills since 2007” in Wisconsin.

As the newspaper noted, “Manure contains an array of contaminants, including E. coli, phosphorus and nitrogen, that can harm public waterways and drinking water.”