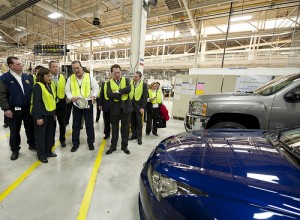 General Motors is one of the companies who have declared their interest in green chemistry. Photo: Flickr/Creative Commons.

A movement to make chemical manufacturing more environmentally friendly has gained steam and turned Michigan into a national leader.

It’s described as chemistry that is benign toward people and the environment, whether during a product’s manufacture, consumer use or after it’s discarded.

It includes anything from corn-based plastic forks to soybean-based inks for printing on paper.

“Our program is considered a model in the country,” said Tracey Easthope, the director of the Environmental Health Project at the Ecology Center, an Ann-Arbor-based nonprofit advocacy group.

“Michigan is the only state with a directive to coordinate green chemistry efforts across the different sectors.”

Created under Gov. Jennifer Granholm’s executive order in 2006, the program has brought together interests like the Ecology Center, government agencies and businesses small and large, including General Motors Co. and Dow Chemical Co.

“A lot of our big companies are talking about it now,” said Christopher Affeldt, an analyst at the Department of Environmental Quality. “There’s a lot of conversation about it in the furniture industry, with companies like Herman Miller Inc. and Steelcase Inc. assuring that their supply chains use green chemistry principles down the line.

“Dow Chemical talks about green chemistry as a piece of their sustainability that pushes prevention from a molecular level.”

“GM is focused on a number of things in green chemistry” from factory to garage, Affeldt said. “They have a lot of landfill-free facilities, but they’re also working on things with energy, with fuel economy standards but also the actual chemicals used in their products and processes in order to make them safer.”

The auto industry has a huge, highly regulated supply chain in Michigan, Affeldt said, but in a perfect world, green chemistry comes before more regulations. “It’s about more than just waiting for the next restriction. It’s about incorporating safe materials all the way from the design.

“There are always businesses that want to do the right thing and then there are businesses that only think dollars and cents unless they have to do otherwise,” he said. “But there’s a case to be made that this actually represents a dollars-and-cents issue.”

By using greener, more efficient substances, they can out-compete some of the trends in globalization that have taken away manufacturing jobs from Michigan, Affeldt said.

Easthope said, “Michigan, unlike a lot of other states, still makes a lot of stuff here. We’re a manufacturing state.

“We also know chemical contamination has been a threat to the Great Lakes, so anything we can do to reduce the hazards of chemicals is going to be important for the health of that resource.”

Concern about chemical effects on the environment was a primary reason why Grand Valley State University and Michigan Technological University have signed a pledge to educate their students in green chemistry principles, making Michigan a leader in education as well, Easthope said.

Affeldt said, “We need chemists and engineers that are thinking about these principles because we need a whole range of people making business decisions, in product development, in sustainability, in environmental health and safety, and also people in the executive suite that at least have a working knowledge of the idea.”

The Green Chemistry Commitment, as the pledge is known, was started by the nonprofit Massachusetts-based Beyond Benign, according to Dalila Kovacs, a professor of chemistry at Grand Valley.

Affeldt said, “A lot of times people hear chemistry and they immediately turn away. But the concept itself is one ultimately everyone can understand.

“If you think about consumer products, you want to have an idea of what you’re picking up off the shelf. Is it going to harm you or when you dispose of it, will it harm wildlife, or did it harm the workers when it was being made?”

The state Chemistry Program’s Roundtable is pushing for more universities to join the commitment.

Kovacs said, “This thing is going to grow. There’s no way back from here.”

2 thoughts on “Chemistry getting greener at Michigan companies, universities”