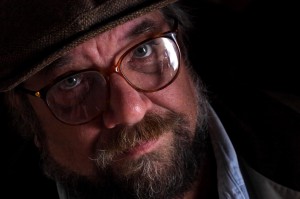 Right after penning the first draft of”November’s Fury,” author Michael Schumacher learned of a new discovery of  a ship sunk by the storm. Photo: University of Minnesota Press.

Just in time for the 100th anniversary, Great Lakes author Michael Schumacher has penned “November’s Fury,” a comprehensive account of the Great Storm of 1913, which sank 19 boats and killed over 250 people.

“November’s Fury” features new information, dramatic accounts of the storm and an extensive collection of illustrations.

Great Lakes Echo recently spoke to Schumacher, who lives in Wisconsin, about his book, what the storm means to the identity of the Great Lakes and whether he thinks the Great Storm will be remembered in another hundred years.

The book can be purchased through University of Minnesota Press for $24.95.

GLE: There have been quite a few books written about the Great Storm of 1913. What did you feel you could add to the historical conversation with “November’s Fury”?

MS: “For one, there were some old documents that I used from the Marine Review of 1914. It took a lot of looking and digging to find some of this information. I mean, I also used sources that have been used before, but some of these were harder to find.

“Another thing is the photos we used. There are some of the most amazing photos we were able to use in this book… My purpose here in writing the book was because it was a while since a book had came out and it’s a storm that needs to be remembered, because our confidence never wavered. Back then, sailors had a certain sense of confidence — that maybe they shouldn’t have had — and this storm reminded them just who’s in charge here. It isn’t the shipping company or the captain. It’s nature. Nature will win.”

GLE: What images or photos in particular stood out to you?

MS: “Some of the really old ones. The ones that really amazed me were the ones of the boats that were grounded from the storm. Here they are, up on a shore surrounded by trees.

“The one in particular that I really treasured at first when I found it was a photo of the Louisiana burned almost to the waterline. I had never seen that photo before — it was very, very striking. As they had been getting ready to leave, it caught fire. We also used some of Bob McGreevy’s paintings and portraits of that storm and I would have loved to use even more of his.”

GLE: Were there any surprises or discoveries when you were researching the book?

MS: “Not really during the writing portion of the book, but afterwards.  The manuscript was completely done, I had already sent it in and it was all but waiting to be typeset. And all of a sudden, I get news that they found another boat! They found the Henry B. Smith boat, which was one of the missing shipwrecks from the storm. We didn’t end up using any of the pictures, but I had to get that information in. It’s amazing that there are still new discoveries a hundred years later.” 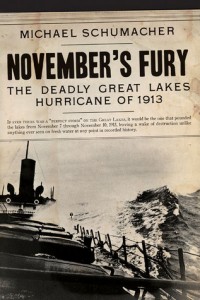 The Great Storm is an important part of the Great Lakes identity. Photo: University of Minnesota Press.

GLE: And a hundred years later, people are still very actively interested in this storm. There was just a three-month long celebration in Canada, people have written plays and created museum exhibits… just how important is this storm to the identity of Great Lakes residents?

MS: “It was the worst. It’s strange, I was just in Detroit at the Mariners Remembrance, which is on November 10th, the anniversary of the Edmund Fitzgerald and the Great Storm. And it was interesting talking to some of the sailors who had been on the boats for 30 or 40 years and to hear their accounts of storms — they talked about how they’d tell younger, wide-eyed sailors about all the storms they’d been through. They’d freak them out. And still, the Great Storm of 1913 is still considered the mother of all storms.

“Nothing before or since has been recorded of that magnitude and it could happen again. Not with the same results in terms of the loss of human life or property, but it could happen again. The people that live on the lakes, like myself, I live on Lake Michigan… we know there’s something about the power of the storm. It’s hard to put into words.  Sometimes it’s almost spiritual, our relationship with the water and the lakes. People gather and watch regular storms. So a storm of this magnitude, it’s just epic. And I don’t use that term very often.”

GLE: Do you think the Great Storm will stick with the Great Lakes region for another one hundred years?

MS: “Who knows? A hundred years is a long time. I get a little skeptical after I’ve talked to captains of those big thousand-footers out there and they scoff at the idea that anything could destroy their boats. Don’t you be so sure, buddy. Nature has its way. So will people remember this? If people are still interested in history, yes, and especially during anniversaries. It’s just like the assassination of JFK, it’s not on everyone’s minds every day, but when an anniversary rolls around, yes… this could stick as a cautionary tale.”

To read related Echo stories on the Great Storm of 1913, click here.