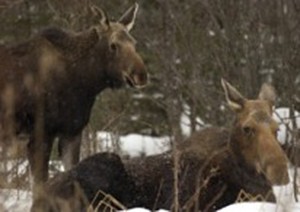 A growth rate in moose population appears to have reversed itself in places like Michigan and Minnesota – and experts are worried. Photo: Michigan Department of Natural Resources.

A national trend in moose die-offs may be hitting Michigan’s Upper Peninsula — and climate change may be the culprit, experts say.

Moose numbers studied in the western U.P. between 1997 and 2007 showed a growth rate of about 10 percent a year — a promising trend since moose were reintroduced there in the 1980s, said Dean Beyer, a Marquette-based moose expert with the Department of Natural Resources (DNR).

However, that rate has slowed to about 2 percent since then.

Other states have experienced significant drops in moose population since the 1990s, with one Minnesota herd dropping from 4,000 to 100 in that time.

The western U.P. moose are dispersed among parts of Marquette and Iron counties, as well as on Isle Royale, he said. A less-studied population exists in the eastern U.P. closer to Sault Ste. Marie.

“Something has changed,” said Beyer, a wildlife researcher, adding that he worries about the future.

“When you see your neighboring states’ population decline so rapidly and when you start to see our growth slow down, then perhaps the factors associated with decline there are starting to affect our herd.”

Possible reasons include infestations of parasites and disease associated with higher temperatures.

Other possible causes include heat stress and the warm-weather-thriving pine bark beetle that kills the trees moose use as camouflage from predators. That beetle was found as a part of a study of moose decline in the Cariboo Mountains of British Columbia.

“I don’t think anybody really knows exactly what’s going on, but one of the leading hypotheses is that it is climate change — increasing temperatures,” Beyer said.

“These are complex ecological systems and it’s unlikely that it’s going to be one factor or another. It’s more likely a suite of factors that are interacting together,” he said.

Beyer said that the way moose are built may not mesh well with changing temperatures:

When scientists look at moose distribution around the globe and at the southern edges of habitat, it’s associated with a cooler range of temperatures.

“There’s a sense that moose are built for the cold and they don’t do so well in warm climates, so as temperatures increase if climate change predictions are correct, we can expect the southern edge of the moose range in North America will move northward,” Beyer said.

That news may be bad for hunters also.

A 2010 state law made moose a game species as long as their population growth rate is at least 3 percent a year.

Amy Trotter, the resource policy manager at Michigan United Conservation Clubs, said, “We definitely support moose being categorized as a game species in Michigan, but science must determine what level of moose hunting is sustainable.

“Ongoing research and population surveys will be necessary to see how resilient the Michigan moose herd is,” she said. “If the growth rate reaches or exceeds 3 percent, we will support a limited hunt here in Michigan.”

“People come up in an attempt to see them, although 99 percent of people are not successful. They’re not exactly out on the roads looking for people.