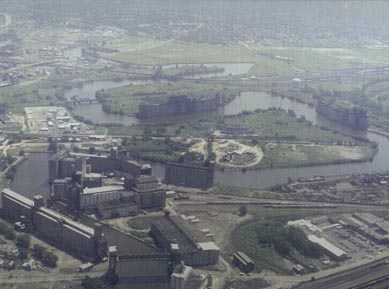 A view of the Buffalo River from the Michigan Street lift bridge. Photo: Environmental Protection Agency.

It is produced by the Healing Our Waters-Great Lakes Coalition, an association of more than 120 environmental and conservation groups.

Here’s a quick look at what the coalition views as success stories in New York:

The Buffalo Creek wetland recovery effort in West Seneca has removed thousands of invasive knotweed plants and other species from the Oxbow wetland and planted native plants.

The wetland was cut off from the Buffalo Creek in the 1950s as a part of a flood control program to protect farmlands, according to the coalition. The change allowed the knotweed to thrive and reduced habitat for native fish and wildlife.

Native species have come back to the creek as a result of the effort of the $65,000 effort.

The recovery is among many efforts to help delist the larger Buffalo River Area of Concern.

The area is on a stretch of the Buffalo River in Buffalo, N.Y., which flows from the east and discharges into lake Erie near the head of the Niagara River. The area has been an important industrial region and is the site of some abandoned industrial parks.

Other successes include the $2.1 million Atlantic salmon fishery restoration in Cortland. Nearly 73,000 Atlantic salmon have been released into the tributaries of the St. Lawrence River and Lake Ontario in partnership with the St. Regis Mohawk Tribe. The U.S. Geological Survey is also planning on releasing lake herring and bloater into those areas.

Despite the successes there is plenty of work in New York.

One of the most expensive efforts to clean up the Buffalo River Area of Concern is the dredging of river’s contaminated sediments, funded at $8.5 million so far, according to the Great Lakes Restoration Initiative webpage.

“Occasionally, (contaminated sediment) has the ability to be resuspended – there’s a potential for uptake into fish, from the benthic community and up the food chain,” said Katherine Winkler, Buffalo River Projects Manager for Buffalo Niagara Riverkeeper, a non-profit sponsor of the project.

The goal of the project is to dredge the sediment or cap it with geotextile fabric that prevents effects of the contamination, she said.

The dredging will help commercial navigation, but the primary goal is to delist the site as a Great Lakes Area of Concern, a designation of the region’s most contaminated sites by the U.S. and Canadian governments 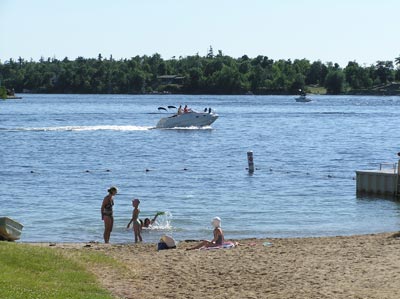 Public access site to the St. Lawrence River in the vicinity of the Area of Concern. Photo: Environmental Protection Agency.

Another New York project is the St. Lawrence River at the Massena Area of Concern. The U. S., Canada and the St. Regis Mohawk tribe share jurisdiction of the area, which includes 15 miles of river from Massena Village downstream to the international border.

Industrial waste disposal has left behind polychlorinated biphenyls (PCBs), mercury, nutrients and harmful metals, according to the Environmental Protection agency’s Areas of Concern webpage. Dams and other structures have physically altered and eroded the river. These problems are made worse by the presence of invasive species.

The restoration funds will allow studies of these and other problems at the Massena/Akwesasne site for three years.

The benefits of these and many other restoration projects are vital economic assets for New York, according to a report by the Great Lakes Commission, an interstate public conservation agency.

Restoration projects help preserve New York’s $600 million recreational boating industry and a multi-million dollar tourism industry in the New York Seaway Trail region, according to the commission. In addition, A Great lakes restoration projects could provide up to $19 million  in shoreline property values, including $1.1 billion n the Buffalo metro area.