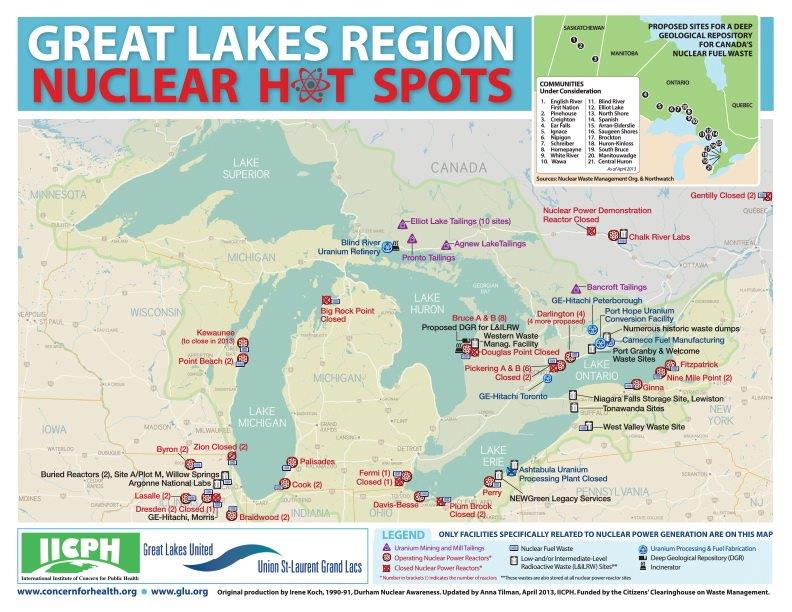 The map provides a detailed regional, binational view of nuclear facilities in the Great Lakes Region. As the map shows, with the exception of Lake Superior, each of the Great Lakes has numerous nuclear sites related to nuclear power generation. Photo: Great Lakes United, International Institute of Concern for Public Health

It includes operating, closed and proposed plants in the United States and in Canada. It also shows facilities that store or dispose radioactive waste as well as sites that mine and manufacture uranium.

The map indicates 38 operating plants. Some sites are within one kilometer of the Great Lakes or the St. Lawrence River.

For example, the Point Beach Nuclear plant is perched on Lake Michigan, just north of Two Rivers, Wis. According to the graphic, the plant has two operating nuclear power reactors and is a source of nuclear waste.

The map is the first comprehensive update of this information in 15 years, and shows disposal sites where nuclear accidents can occur.

An International Joint Commission task force indicated that releases from such facilities are substantial, but that the extent of knowledge about the releases and their impacts was “limited.”

The map can be used as resource for communities concerned with the release of radioactive waste and the risk of waste being brought in by ships in the Great Lakes’ shipping channels, according to Great Lakes United.