More than 44 billion gallons of water were extracted daily from the Great Lakes-St. Lawrence River Basin in 2011, according to a new report.

Of the region’s states and provinces, Ontario withdrew the most water, at about 37 percent and Pennsylvania took the least at .07 percent. Uses for the water include irrigation, public drinking and industrial needs.

That amount does not include water used for hydroelectric energy.

When including energy uses, the picture changes dramatically. Quebec, New York and Ontario together make up  more than 97 percent of the water withdrawals.

The findings are part of an annual report recently released by the Great Lakes Commission. The full report can be found here, as well as previous years’ reports. 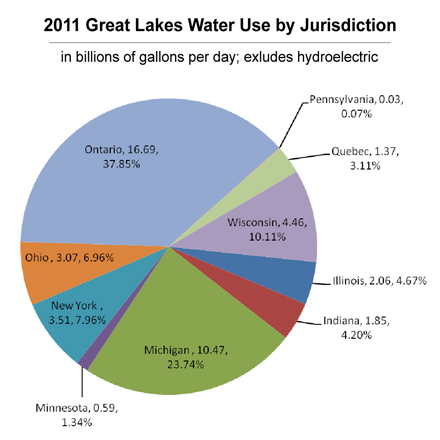 This chart shows the breakdown in gallons and percentages of 2011 water usage in each Great Lakes region. Image: Great Lakes Commission.