After graduating from the University of Michigan with masters’ degrees in environmental policy, Kirsten Howard and Allie Goldstein understood the plans and policies created in response to climate change.

What was missing, they said, was an interaction with what was actually being accomplished in towns, cities and states across the country.

“We wanted see adaption to climate change through the everyday decisions of people and communities,” Howard said. “And we wanted to get that perspective to inform our future policy work.”

So they decided to take on a new, more hands-on educational experience — their “Great American Adaptation Road Trip.”

Howard and Goldstein became roommates in August of 2011, when they both responded to an ad on Craigslist for a house in Ann Arbor. Two summers later they’re hitting the road, blogging and tweeting along the way and raising funds for their trip online.

For the next three months they’ll seek the  answer to this  question: what does climate change adaptation look like?

“We’ve made it through mid-June in our planning,” Howard said. “Next we’ll head east — Boston, Vermont, and Maine, and we might try to hit New York and New Jersey.

“Then we’ll head down to Baltimore, which is interesting because they’re one of only a few places that are incorporating climate change adaption into their hazard planning, or how they respond to natural disasters and emergencies,” she said. “Eventually we’ll make it out west, to states like Colorado and then eventually circle back to Michigan.” 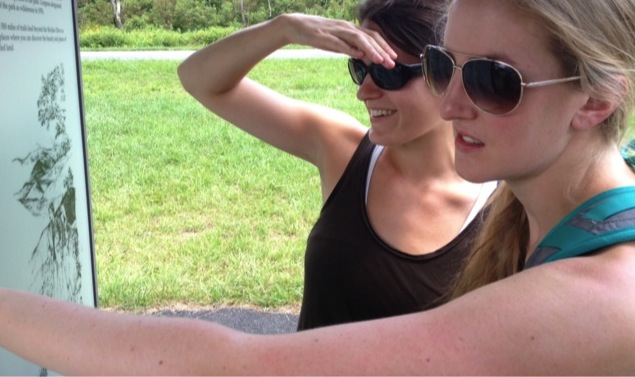 “Lake levels in Pentwater are about 29 inches below the long-term annual average this year,” said Goldstein. “Pentwater Lake is connected to Lake Michigan through a channel, which has unprecedentedly low water levels.”

Large boats come through Pentwater’s channel in the summer to do business in town, and if they can’t make it through, the city’s economy suffers, Goldstein said.

The United States Army Corps. of Engineers has dredged the channel in the past, but Pentwater is no longer a Safe Harbor. Recreational harbors, Goldstein explained, don’t receive funding for dredging projects.

“We essentially went to a coffee shop and met this amazing group of about two dozen people,” said Goldstein. “They meet at 10 every morning to discuss the lake levels and other issues.”

Read more about their experience in Pentwater on their website.

Later in the week, they  toured a wastewater treatment plant in Grand Rapids that has recently stopped using chemicals to treat liquids.

Howard also described their efficient system to trap heat inform  one building of the plant to warm the other buildings.

“Grand Rapids is an incredibly sustainable city — sustainable ethics are built into every government position they’ve taken on,” Howard said.

Goldstein and Howard will be continually providing updates on their blog and on Twitter, and still welcome donations on their fundraising website.

“It’s been so eye-opening so far,” Howard said. “We understand the policy, but now we’re able to see what’s going on the ground.”