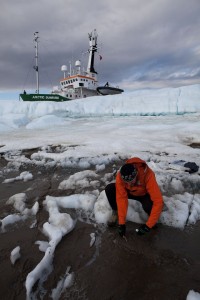 A Midland, Mich.-based graphic artist and climate change awareness advocate has turned his sights abroad to help bring attention to an environmental issue that spans the globe.

Peter Sinclair, known for his YouTube video series, “Climate Denial Crock of the Week,” has become involved in Dark Snow, a research project examining the link between the wildfires of the American West with Greenland’s increasing snow melt. It is one of the first research projects to be supported through crowdfunding, a process of collecting donations of varying sizes from many individuals via the Internet.

“Funding is perennially a problem for scientists,” Sinclair said. “We decided to look at crowdfunding this on the Internet as a supplement to the long grant-writing process.”

Increased melting in Greenland has been linked to a rate of sea level rise that has doubled since 2006, according to information on Dark Snow’s website.

Jason Box, a scientist with Ohio State University’s Byrd Polar Research Center and Dark Snow’s leader, approached Sinclair to create videos to help raise funds for the project. Prominent environmental activist Bill McKibben endorsed the project and wrote a feature on it for Rolling Stone Magazine in August. McKibben is expected to join the project team for fieldwork this summer.

Sinclair has produced two videos for the project thus far, the first launched in January and the second in February.

“We got some press reports on those, and money started to come in,” Sinclair said, “The bottom line is we’re about halfway there, which is kind of a critical point to be.”

“They concluded in that paper that if this continued, because darker surfaces absorb more energy and increase the melt, in this decade you would see melt over the whole surface of Greenland,” Sinclair said. “This is something that’s never been observed before.”

While traveling in the summer of 2012, Box was struck by coverage of the wildfires in the American West, wondering if 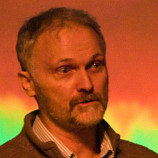 there was a link between the unprecedented quantities of ash being released into the atmosphere and the increasing rate of snow melt in Greenland, according to Sinclair.

“It occurred to him that there might be some kind of positive feedback between the fires and the darkening of the snow in Greenland,” Sinclair said. “He hatched this idea to go back to Greenland and study this.”

Box theorizes that if soot and ash are carried through the air from the wildfires to the snow sheets of Greenland, it would darken the snow, decreasing its reflectivity and increase both its melting rate and that of the snow beneath it.

McKenzie Skiles, a Dark Snow researcher and doctoral candidate with the University of California, Los Angeles, has studied similar issues in Colorado. That is where mineral dust from the Colorado River Basin has settled onto mountain snow deposits, increasing their absorption of sunlight.

These dark particles are a major factor in global climate changes, according to Skiles.

“The deposition of dark impurities, like black carbon, or soot, reduce the snow reflectivity and enhance melting,” Skiles said. “Recent research has found the black carbon is second only to carbon dioxide in climate forcing effectiveness, and part of this is due to the impact it has on the world’s snow and ice cover.”

Snow is one of the most reflective natural surfaces on the planet, reflecting up to 90 percent of incoming solar radiation, according to Skiles. As the areas of the earth covered in snow shrink, the planet will absorb more solar radiation, increasing the rate of planetary warming.

While much of the ash that ends up in snowy regions comes from human sources like cars and industry, large quantities of it also come from forest fires, Skiles said.

“As the climate changes, forest fires are becoming more intense and forest fire seasons are growing longer,” Skiles said. “We know from satellite imagery that smoke plumes have reached the ice sheet, but now we need to sample the snow and do some analysis to establish the relationship and understand the impacts.”

While sea level rise is one of the primary concerns related to Greenland’s melting, it should not affect the Great Lakes directly because the oceans don’t run into the lakes.

Sea level rise is merely one of the most noticeable symptoms of the climate changes Dark Snow will investigate, Sinclair said.

Since 2007, after a major collapse in arctic sea ice, researchers noticed weather change patterns in the northern hemisphere, said Sinclair.

“There is an emerging consensus, though it’s not settled science yet, that with this rapid opening of water in the arctic that was formerly just ice, comes increasing impacts on Greenland and moreover changes in the jet stream,” he said.

There is speculation that this could lead to disruptions in weather surrounding the Great Lakes region. 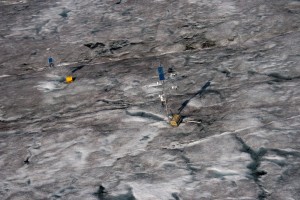 Some of Box’s research equipment studying the ice’s surface on a previous trip to Greenland. Photo: Jason Box.

“We saw this last spring when it was 88 degrees in Saginaw,” Sinclair said. “The whole eastern part of the U.S., including Michigan, was stuck under this enormous dome of warm air. That’s what scientists are saying we’ll be seeing more of. We could also get stuck in a dome of cold air, where instead of just that one springtime cold snap you could get weeks of it.”

The opening of seas in the Arctic, melting in Greenland and weather changes in the northern hemisphere are all connected, according to Sinclair and his colleagues.

“The things that happen in the north don’t just stay in the north,” Sinclair said. “If those changes in Greenland accelerate, we will continue to see potentially even more bizarre and severe impacts elsewhere.”

Climate change is complicated and not bound by geography, Skiles said.

“All regions, including the Great Lakes, will be impacted by a changing climate,” she said. “Impacts could be manifested in shifting temperature and precipitation patterns, changing biodiversity and phenology and increased intensity of weather events.”

The project’s team plans to analyze ice core samples to see if last year’s dramatic increase in snow melt is linked to the increase in wildfire activity.

Dark Snow has raised more than $74,500, 48 percent of its target goal of $150,000. Sinclair said he will likely produce another video to raise awareness of the project.

“We want to keep people who are interested in citizen science and climate science updated, bringing them more into the process and making it less abstract and more real,” he said.