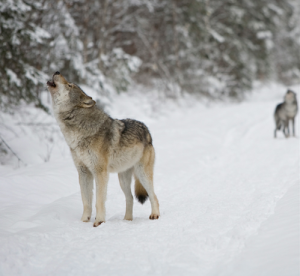 Michigan conservation groups and the state’s Natural Resources Commission are debating how a Michigan wolf hunt will affect the health of the wolves, ecosystem and people. Michigan wolves, numbering less than 1,000, were taken off the Michigan endangered species list in December. Michigan Gov. Rick Snyder signed a bill allowing the state to create a wolf-hunting season.

The grey wolf and the Eastern Timber Wolf were once both included on the federal endangered species list. Both wolves are considered a game species in Michigan, although the Michigan Natural Resources Commission has not yet decided on a season.

Opposition to the season

“What we are trying to do is to keep [the wolves] on the endangered species list, or at least the threatened species list,” said Pamela Graves, a veterinarian in Petoskey, Mich.

There is minimal interaction between wolves and humans, Graves said. If they threaten livestock or deer, a hunting season should be considered. Otherwise there really is no advantage for the ecosystem if wolves are hunted.

The Michigan Department of Natural Resources is surveying the wolf population and will recommend to the Natural Resources Commission if a hunting season is needed to control them, Boulder said. The results from the survey will be released by late April.

Deciding the next steps

Part of the decision is made by looking at where people and animals have been threatened by wolves. People and livestock are more commonly threatened in the upper peninsula of Michigan than the Lower Peninsula.

“Wolves help promote healthy forests, especially by killing deer in winter in deer yards that are dominated by lowland coniferous tree species,” said Michigan Technological University professor Rolf Peterson. “Because of high deer densities, regeneration is frequently lacking for these coniferous species and many of the deciduous tree species are favored by deer.”

In 2012, grey wolves and Eastern Timber wolves were removed from the federal endangered species list, permitting states to decide if it was appropriate to add them to state endangered species lists. Both Minnesota and Wisconsin have established hunting seasons, and now Michigan will have a chance to join. No other Great Lakes state hunts wolves.

In Minnesota, a wolf hunting season is consistent with how the Minnesota Department of Natural Resources manage other species that involve hunting and trapping, Stark said.

What a season would mean for Michigan wolves

If an official hunting season were to be established in Michigan, one of the main reasons for the season would be controlling wolves that threaten people or livestock that have been threatened by wolves, Boulder said.

“If a wolf hunt takes place, it wouldn’t be a broad range hunt, it would be used as a population management tool.”

Last November, hunters in Minnesota with rifles in tow took up hunting wolves after a hunting season was established. Minnesota targets a harvest rate of 400 wolves per season. The number of wolves has remained at a steady 3,000 for the last ten years, according to the Minnesota Department of Natural Resources.

Wisconsin had a wolf hunting season for the first time last year. Michigan, Wisconsin and Minnesota are a part of the distinct wolf population segment, meaning all three states are exempt from the Endangered Species Act.