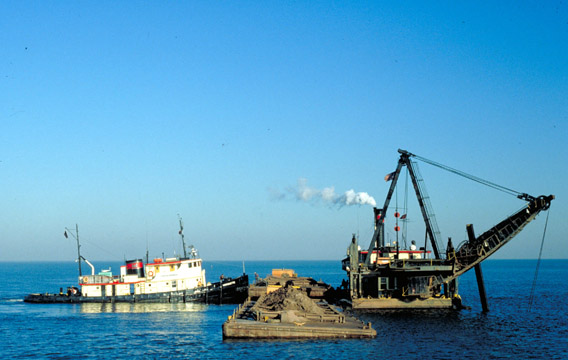 Dredging on Lake Superior near Duluth, MN. While dredging can help commercial and recreational boating on the Great Lakes, it can also stir up harmful chemicals in the sediment. Photo: Minnesota Sea Grant, via U.S. Environmental Protection Agency.

Dredging may be a solution to Great Lakes low water, but it can also lead to contaminated sediments re-merging into the water.

Michigan Gov. Rick Snyder recently signed a bill in March allowing an additional $20.9 million to be spent on dredging this year to help recreational and commercial boaters operate in low water levels.

The most common contaminant in the bottom of the Great Lakes is polychlorinated biphenyls, also known as PCBs, according to the Michigan Department of Natural Resources.

PCBs got into the Great Lakes because of the automobile industries near the lakes, said  Andy Buchsbaum, director of the Great Lakes office for the National Wildlife Federation.

There was a lot of PCB-laced oil used by the automobile industry before was banned, said Buchsbaum.

“There still was this old equipment that had PCB-contaminated oil in it which is leaked into the ground and ultimately found it way into the Great Lakes,”  Buchsbaum said.

When dredging moves contaminated sediments, chemicals are exposed. They can be harmful to wildlife and people who enter the water, said Kim Fish, assistant chief for the Water Resources Division at the Michigan Department of Environmental Quality.

“In areas where we know we have contamination that is impacting wildlife and water quality, removal of that sediment is usually a good thing overall,” said Fish. “However, (the Department of Environmental Quality) needs to consider where (they are) going to place that contaminated material and make sure (they) are not spreading the contamination.”

Humans who eat fish contaminated with PCBs and arsenic are at a high risk of cancer and other organ damage, but the largest effect these chemicals have is on reproductive health, said Buchsbaum.

“(The chemicals) can impair the development of the fetus in pregnant women who eat contaminated fish,” said Buchsbaum.

PCBs affect fish as well when stirred up from dredging, said Joe Bohr, an aquatic biology specialist with the resource agency.

“With carp they live on the bottom and they stir up the sediments – similar with catfish,” he said. “Both of them tend to be fatty and these contaminants accumulate in the fat.”

Bohr said top predator fishes are at risk too when eating carp and channel catfish.

“This has been a several year trend of lake levels declining. Primarily we are not getting a lot of ice cover in the winter on any of the lakes which allows evaporation to occur all winter long,” said Fish.

Fish said another reason the water levels are low is because snowfall has declined in northern areas of Michigan and parts of Canada. Snowfall maintains water levels when melted, or when snow goes directly into the lake.

At the federal level, an additional $4 million will be provided to fund dredging this year compared to last year , said Michael O’Bryan, chief of engineering and technical services at the U.S. Army Corps of Engineers in the Detroit district.

“Our needs are out there for more money…there is a significant increase in need for dredging funds in the Great Lakes area,” said O’Bryan.

O’Bryan said the U.S. Army Corps of Engineers in the Great Lakes region needs about $40 million each year to keep up with dredging needs for commercial vessels.

8 thoughts on “Dredging can churn up historical contaminants”