The Great Lakes shoreline stands to benefit in some important, albeit hard-to-quantify ways from two high-profile appointments made recently, that of Cardinal Jorge Mario Bergoglio to Pope Francis and that of Gina McCarthy to U.S. Environmental Protection Agency administrator.

Having a new pope identify himself with St. Francis of Assisi is a very intriguing development and should be welcomed as good news, especially in this era of cutbacks to environmental programs and, equally as important, to the number of journalists and other communicators who bring you environmental news.

I’ve long been fascinated by the role of religion in environmental news. For millions of people around the world, perhaps even the majority of 7 billion-plus now who inhabit it, religion is not just religion. It’s a communication vehicle.

The fact we now have a pope named after St. Francis of Assisi, a 13th century saint, is exciting and I’m not even Catholic.

While the national media has played up St. Francis’ humbleness and empathy for the poor, it has remained largely oblivious to him being the patron saint of animals and the environment. The subtle effects the Catholic Church begins to have on the environment as a result of this new pope could be an emerging story.

Now, don’t get me wrong. I don’t expect the Vatican will try to order a cleanup of toxic sludge from a Great Lakes harbor. But if it’s true that policy comes in response to a groundswell of support, the Vatican’s role in improving the environment worldwide is not so far-fetched.

Consider that the Vatican played a key role in helping former President Ronald Reagan work behind the scenes and help Poland’s Solidarity movement gain strength in the early 1980s, eventually leading to the fall of communism – one of world history’s most remarkable events. 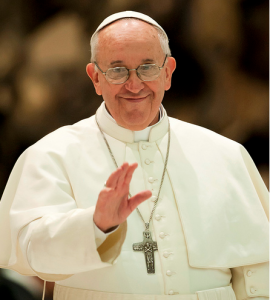 If it can do that, one would think it could galvanize support for saving the world’s largest source of fresh drinking water, the Great Lakes. It may not orchestrate a campaign directly. But as more is learned about this pope and his dedication to St. Francis of Assisi, one could at least have some optimism it might try harder to keep one of God’s greatest gifts from plundering, especially along the Great Lakes shoreline – the area where humans have the greatest impact.

St. Francis lived from 1182 to 1226. He founded the order of friars that bears his name.
Robert F. Kennedy, Jr. wrote a children’s book about him and his intense love of nature.
Several convents have rededicated themselves to the environment because of their reinterpretation of St. Francis’ work.

One I’ve covered for years is the Franciscan Earth Literacy Center, founded by the Sisters of Francis Community in Tiffin, Ohio. It’s near the Tiffin River, a Lake Erie tributary.
Trust me, they are stewards of the near-shore environment.

Their center has become one of northwest Ohio’s most vibrant for community programs and fully engages its local community on issues such as curbing runoff, reducing greenhouse gases, being less wasteful and more energy-efficient. At last count, it was serving 75 groups, many affiliated with area schools and scouting programs.

The center is run out of a 1939 barn the nuns began restoring shortly after reinterpreting St. Francis’ writings in 1992. The building is believed to be Ohio’s first to use shredded jeans as insulation. With energy-efficient heating and passive solar energy, it incorporated green construction into its design before the term became a fad.

In 2011, the center dedicated a large solar array and wind turbine, thanks in large part to area corporations and other sponsors which believe in its mission. One of the newer projects has been a house of straw bales that runs on its own power, to demonstrate how to live free of the region’s electrical grid.

A highly successful food co-op the nuns created in 2004, the 23-acre Seeds of Hope Farm, is managed by community volunteers and those affiliated with the convent. Its chemical-free produce sta

nd draws visitors from miles around. Several restaurants, even a country club, have made regular use of its vegetables, as well as eggs laid by the farm’s free-range chickens.

The nuns are careful to leave buffer strips and take other measures to protect the near-shore environment. They put 350 acres into a conservation easement with the help of the Perrysburg-based Black Swamp Conservancy. Throughout their campus, they only mow when necessary to keep down air pollution.

Of the multiple trips I’ve made there since 1994, two years after the convent’s nuns resolved to dedicate themselves more deeply to St. Francis of Assisi’s environmental vision, the one that stands out in my mind occurred in March of 2006 when I was alone in the barn with Sister Rita Wienken. She started crying. They were tears of joy. We had been talking about their work and she told me she got a little misty-eyed from our conversation, realizing how happy she was at that moment in her life to be fulfilling St. Francis’ mission.

That’s the kind of inspiration I’m talking about. It doesn’t show up in a work order or a press release. But it makes a difference.

In nearby Sylvania, Ohio, a Toledo suburb, nuns at the Sisters of St. Francis convent have been active in runoff and other near-shore programs aimed at reducing water pollution, especially into Lake Erie’s biggest tributary, the Maumee River.

Their site was one of Ohio’s first to plant a new breed of American chestnut tree, a species the U.S. Department of Agriculture developed to help bring back chestnuts and partially compensate for losses of ash trees destroyed by the emerald ash borer. The first two were planted at the White House in 2004. Two of Ohio’s first four were planted at the Sylvania convent on Arbor Day in 2006; the other two were planted that the same day at the Ohio statehouse in Columbus.

A non-profit education program, Science Alliance for Valuing the Environment, or SAVE, has been around since 1990. It says it is “caretakers of the gift of creation” and has been recognized for its work by many, including the National Environmental Awards Council and the United Nations Conference on Sustainable Development.

ide in the Earth’s atmosphere. Carbon dioxide is the most prevalent greenhouse gas linked to climate change, and the world’s output of it has exceeded 350 ppm. The event was linked to the UN climate change negotiations that month in Copenhagen, Denmark, when there were hopes for a stronger global agreement to reduce greenhouse gases.

There are numerous other examples of how religion has been used to communicate environmental news throughout the Great Lakes region and the world.

Scholars such as E.O. Wilson believe mankind’s only hope of saving itself is to have science and religion form a stronger bond. Wilson’s 2007 book, The Creation: An Appeal to Save Life on Earth, remains one of the most eloquent on the subject..

As Kennedy said near the end of a 2007 speech at the University of Toledo: “I don’t believe nature is God, but I do believe it is the way God communicates with us.”

Having our first Pope Francis may not be a game-changer for the Great Lakes region. But it can’t hurt. 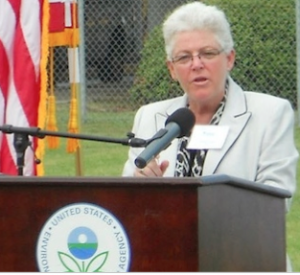 What does air pollution mean for the region’s near-shore ecology? Plenty.

One of the most destructive airborne pollutants is mercury. When it falls from the sky and mixes with fresh water, it becomes hundreds of times more potent as it converts to a new pollutant called methylmercury.

Mercury contamination is one of the greatest drivers behind fish-consumption advisories. The quality of Great Lakes fish impacts recreation and tourism, which affects shoreline businesses – not to mention our public health and property values.

Ground-level ozone, which creates smog, creates similar problems, as do many other pollutants.

Greenhouse gases warm the Earth’s climate, which – as we’ve seen this past winter – affect Great Lakes water levels. When water levels are down, the near-shore boating experience isn’t as much fun. And, it can be more costly if marinas have to do more dredging, which can lead to various near-shore environmental impacts.

McCarthy’s predecessor, Lisa Jackson, couldn’t get climate legislation through Congress but did an end-around on behalf of the Obama administration, enacting tougher U.S. EPA rules through powers the agency has assumed under the Clean Air Act.

That, according to insiders, set the stage for numerous legal challenges during Obama’s second term.

To keep those rules intact, the U.S. EPA needed someone who is strong on air pollution.

That’s McCarthy, who gained a reputation as a bulldog on air pollution issues in her former role as the U.S. EPA’s assistant administrator of air and radiation.

Prahbu Dayal, chairman of the nation’s largest energy, utility and environment conference, called EUEC, described McCarthy as someone who has “maintained a balance of reaching out to stakeholders that is both productive and respected.”

Tom Kiernan, president of the National Parks Conservation Association, which has been increasing its profile in the Great Lakes region, called McCarthy “a pragmatic leader in fulfilling the demands of landmark legislation like the Clean Water Act and the Clean Air Act, both of which are integral to the long-term health of our national parks.”

“We expect her to continue the visionary work that has helped in the environmental restoration of the Chesapeake Bay and the Great Lakes and to keep our other park waters clean and protected through strong EPA guidance and the best science available,” he said.
Gene Karpinski, president of the League of Conservation Voters, called her a “slam dunk for the environment.”

“She’s a straight shooter, a straight talker, and she knows how to get the job done,” he said.
Support was voiced by numerous other environmental groups.

Needless to say, many industry lobbyists were less than thrilled.

James M. Taylor, senior fellow for environmental policy at the Chicago-based Heartland Institute, a free-market think tank that argues against the need for climate legislation and other air pollution laws, accused McCarthy of having “a long history of demonizing affordable energy and doing everything possible to shut it down.”

Alan Caruba, founder of The National Anxiety Center and a Heartland Institute policy advisor, called her part of Obama’s “anti-energy and anti-growth agenda.”