Do you know the name for a zone in a body of water where temperature rapidly changes with depth?

Students competing in the 2013 National Ocean Sciences Bowl are expected to know the answer. In fact, the question is categorized as “easy.” 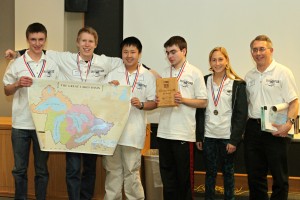 This year’s Great Lakes regional competition was held Saturday, Feb. 9 at the University of Michigan’s School of Natural Resources and Environment. Students from the college worked together with the Michigan Sea Grant to organize the event.

The Great Lakes contest is one of 25 regional competitions, held every February, that make up the National Ocean Sciences Bowl. This year schools from Michigan and Ohio participated.

Each participating school sends a team, and each team is made up of five students who must answer buzzer questions quickly and correctly. There are also a number of more challenging team questions, all of which focus on fresh and salt water.

The winner for the Great Lakes region is Greenhills High School, from Ann Arbor, Michigan. Greenhills students will head to Milwaukee this April to compete in the national finals competition.

During the finals, each team member will become a stakeholder on a particular subject matter or proposed bill trying to inform a panel of judges who act as Congress.

Kevin Keeler, co-coordinator for the Great Lakes Region, said that this format gives the students real world applicability.  “Students are able to practice what it is actually like being scientists and policy-makers,” Keeler said. 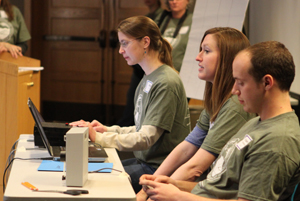 The competition was moderated by Rebecca Williams from Michigan Radio, pictured above. Photo by Colleen Neuman.

According to Keeler, Admiral James D. Watkins created the National Ocean Sciences Bowl in 1998, and the regional sportsmanship award was named in his honor after he passed away this summer.

The Quagga Mussel award, however, offers a more positive take on an invasive species.

“The Quagga mussel award is typically awarded to the last place team in hopes that, like the tenacious Quagga mussel, they will be back to the competition in much greater numbers and performance,” Keeler said.  “The recipient is awarded a trip to the Lake Superior Youth Symposium, sponsored by Michigan Tech.  The goal is that although a team didn’t perform as well as they had hoped, they will come back again through some educational assistance.”

One thought on “Students compete in Great Lakes Bowl”