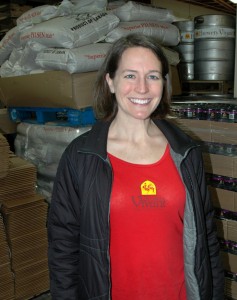 In a trendy neighborhood in downtown Grand Rapids, you’ll find Brewery Vivant in an old funeral parlor with original hardwood detailing and ornate stained glass windows. You can treat yourself to a Belgian-inspired farmhouse beer and some escargot or duck nachos.

And you will be giving more back to the environment than you may realize.

Only in its second year of business, Brewery Vivant has established itself as one of the leading eco-friendly breweries in the nation. It was the first brewery in the United States to become LEED certified, a standard of high performing green buildings. It is one of six breweries (out of 120) in Michigan to can beer for distribution. Cans contain higher percentages of recycled material, are more likely to be recycled and canning is widely considered  the eco-friendly alternative to bottling.

“Every business wants to be profitable, but we’re also going to do things that are environmentally sound,” said Kris Spaulding, co-owner of Brewery Vivant. “It’s in our DNA, you know?”

Spaulding heads the brewery’s environmental efforts. When she and husband/co-owner Jason Spaulding envisioned Vivant, they decided on three cornerstones.

“The goal of Vivant was to center around Belgian and French inspired beer, expert pairings of beer and food and being environmentally conscious and socially responsible,” she said. “Sustainability was a non-question.” 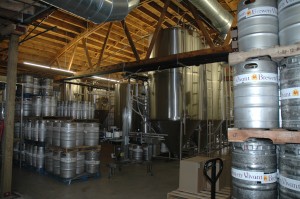 Low-flow toilets and energy efficient light bulbs are standard for going green. But Brewery Vivant has taken other non-traditional steps.

“We make a ton of fries and of course, end up with a bunch of fryer oil,” Spaulding said. “So I put something out on our Facebook asking if anyone could use it. We were referred to some local guy, and now we donate it to him and he runs his truck off of it. Down the line, I’d love to explore if we could even have our company car run off of fryer oil too.”

Another common practice in brewing is to donate used grains to farmers to feed their cows, Spaulding said. Vivant donates grain to a farmer who raises show and rodeo cattle. But brewery officials would eventually like to improve that system.

“We’re hoping to have a closed loop system,” she said. “Hopefully soon we can start giving the grains directly to a farm that we’re going to purchase meat from and create that closed loop of resources.” 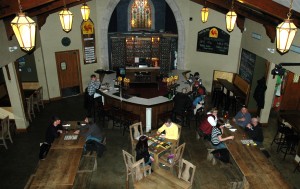 Brewery Vivant is in an an old funeral parlor with original hardwood detailing and stained glass windows. Photo: Becky McKendry

“We’ve put together a plan to look at different areas — the way they brew, the building and how they handle waste products,” said Jarett Diamond, director of Green Brewery Project. “We’re going to come up with a plan together to add to their already very impressive sustainability program and take it to the next level.”

The project will install sensors to measure how much energy is used by the brewery and to target improvement.

Diamond said another one of the components of this plan is to explain progress and goals to customers by publicizing lofty ambitions.

Brewery Vivant published its first sustainability report for 2011, which covers such things as how the brewery donates profits and buys local resources. The 2012 report should be available this month.

“It’s something I found interesting about Vivant,” Diamond said. “Many breweries have a local focus, and it’s one thing to say ‘we’re local and sustainable,’ but it’s another to be able to articulate it as well as Vivant has done.”

There are challenges ahead.

“We definitely want to focus on a couple key things for this next year,” she said. “There’s the 3-to-1 ratio for water [an average is around 5-to-1], which is three gallons of water needed to make every gallon of beer. It’ll be really hard to get to, and we did that on purpose. We aim high.”

“Sustainability is what we founded this company on,” she said. “We want everyone that works for us to know what that means and be comfortable explaining that to anyone. And we want them to explain it in a personal way that means something to them.”

The brewery has a partnership of sorts with Tree Huggers, a nearby business that takes otherwise unrecyclable materials like CDs and toothbrushes and outsources them to other companies to be reused. Spaulding said she encourages staff to bring in those materials so she can later take them to Tree Huggers.

A Growing Trend
“There’s a very particular willingness to adopt more sustainable practices in the craft beer industry than others I see,” Diamond said. “I think it has to do with the rationale behind the industry- it’s focused on quality and the local community rather than creating a large, national brand.” 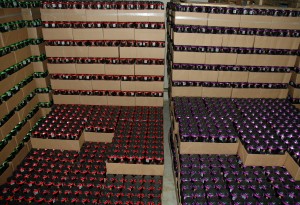 Vivant uses eco-friendly cans like these to distribute their cans. Photo: Becky McKendry

Spaulding looks forward to the opportunities offered by sustainability efforts.

“Craft breweries are ridiculously booming right now, and I think a lot of them are out there to be environmentally friendly, and that drives innovation. The brewing systems and different machines will evolve to be more environmentally conscious as demand rises.”

And as their goals mount, Spaulding will continue to aim high.

“We may not have the capital to do everything we’d like to for a couple years, but it will be awesome knowing what’s possible,” she said.

Story corrected 2/12/13 to accurately report number of Michigan breweries that can beer.