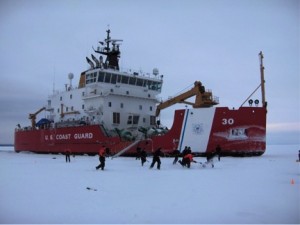 The shaping of the Great Lakes’ geographic, economic and cultural history by ice is revealed in a documentary set to be finished in late April.

Producers of Project: Ice used high-definition cameras to capture spectacular scenes of ice on the lakes as well as intimate portraits of residents’ connection to the wonders of winter, said Bill Kleinert, executive producer and director for the film.

“Ice has been involved in so many aspects of the Great Lakes, right from its original creation from glaciation, on through the present and the development of its culture, economy, shipping, navigation (and) commerce,” Kleinert said.

The Cleveland native began the project two years ago to document the historic car ferries on the Straits of Mackinac. But it evolved into something bigger and more illustrative of the entire Great Lakes region, he said.

“I went to college with people who have never been (to the Great Lakes), don’t know what they’re about, don’t really care to know,” said the film’s editor Kevin Kusina. “I wanted to open people’s eyes, quite literally, on this…spectacular place, a beautiful area worth saving on many levels and worth coming to see – the whole Michigan/Midwest way of life that is so much more different from the East coast.”

Dogsledding, ice climbing, wind surfing, winter tourism and ice fishing are just the tip of the iceberg in this film.

Ice also impacts the region’s economy, in ways large and small, Kleinert said. The film depicts commerce brought to the states through the Soo Locks by 1,000-foot commercial vessels like the Paul R. Tregurtha, flagship of the Interlake Steamship Co.

It features ice-breaking boats like the U.S. Coast Guard’s Mackinaw, which routes through ice-clogged shipping lanes to enable that trade.

But it also shows small impacts, like that of the ice bridge connecting St. Ignace, Mich. to Mackinac Island. Snowmobilers and other tourists have crossed the bridge for generations as a long-standing tradition.

“When they deem it’s safe…they (do) what they call ‘brush the trail’ which is where they take old Christmas trees and they stick them in the ice every, I don’t know, 100 feet or 200 feet, and mark a trail that they deem to be a safe path,” Kleinert said.

“One of the things that’s surprising is how much of the historical tradition is still alive today in social practice in various parts of the region,” said Althea Middleton-Detzner, the post-production coordinator the film. “It’s really cool to see…those practices being carried on today.”

Such traditions may be endangered by climate change, Kleinert said.

“As our interviews evolved…we began hearing people from all walks of life mention climate change to us.”

The film’s adviser on climate science is Henry Pollack, a geophysicist at the University of Michigan who shares the 2007 Nobel Peace Prize award with former Vice President Al Gore.

Pollack wrote “A World Without Ice” and got the international award for his work on the Intergovernmental Panel on Climate Change, a United Nations body commissioned to investigate climate change. He is featured in two of the film’s 25 interviews.

But the film isn’t just about science.

Other interviews are with members of a family that uses ice fishing as a bonding experience.

“There have been many places where ice has not formed now (and) that has disrupted otherwise normal cultural heritage and ability to get out and enjoy the lakes in winter,” Kleinert said.

“We had the good fortune to be invited with one of the top ice climbers in the world to go and see how the sport works and it was really, really fascinating,” he said. Kusina got footage by climbing a cliff himself. Most camera operators would be reluctant to scale an ice-covered cliff with $150,000 worth of equipment

“It was great,” Kusina said. “I got to use some of my old boy scout skills.”

Most of the production crew grew up in the Great Lakes region enjoying what the icy season offers, said Kleinert. “It can be a truly beautiful and spectacular place to experience in the winter. Unfortunately I think that there are many residents of the Great Lakes basin, about roughly 40 million residents…and many of them have never experienced these aspects of winter. So we hope this will introduce some people…to things that are available to them right in their back yard.”

The producers have completed filming and are working with the Emmy-award-winning PixelDust studios in preparing animations for the film. They are targeting a “pretty major” location right on the Great Lakes for its world premier, according to Kleinert, but would not disclose where.

The project is funded by Tillinghast Reid WorldWide, a Washington, D.C.-based production company.