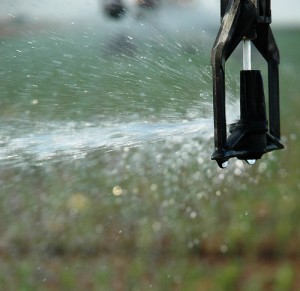 New legislation hopes to resolve disputes over groundwater use before they end up in court. Photo: agrilifetoday (flickr)

Fights over Michigan groundwater have a chance to be resolved before they get to court under legislation recently signed by Gov. Rick Snyder.

The legislation extends a program that was repealed in 2009 as a budget cutting measure. Since then, the state’s Department of Environmental Quality has received about 107 complaints. Only 53 were resolved out of court.

Both well owners and agricultural industries rely on the groundwater flowing deep beneath the earth. In some cases, its depletion can render smaller wells useless – unsurprisingly, disputes result.

The problem is not new, legislators and representatives of rural industries say, but as agriculture expands, conflicts are expected to become more prevalent.

From 2003 to 2009, the state’s aquifier protection program assisted property owners who believed their wells and groundwater levels were harmed by neighboring water use, said Maggie Datema, director of the office of legislative affairs at the Department of Environmental Quality.

The program ran through DEQ and resolved most cases brought before a civil suit was deemed necessary, she said.

Doug Van Epps, director of the Office of Dispute Resolution at the Michigan Supreme Court, said that agricultural disputes generally come up most often in the west and northeastern areas of the Michigan’s Lower Peninsula.

Particularly with land and natural resource disagreements, Van Epps said involving a mediator or implementing a specific program could help to make sure all interested parties – not just the landowners – are comfortable with the outcome.

“When you’re talking about groundwater, you’ve got people other than just the neighbors with an interest in this issue,” Van Epps said. “Local and state officials manage groundwater issues as well, and it’s key to involve them in the process.”

There was concern it would fall through the cracks late last year during the Legislature’s frantic lame duck session, but it was passed106-1 by the House.

As the agriculture industry in Michigan expands, more farmers of crops such as potatoes will require water for irrigation, she said.

Other farmers are already implementing irrigation in the wake of recent crop failures and damaging weather patterns. Adams said that with the program, residents with wells can have means of communication with nearby farmers should their groundwater use cause disagreements.

Rep. Dian Slavens, D-Canton, was the only House member who voted against the bill, citing budget concerns and a provision that would allow large-quantity well owners to opt out of the dispute resolution process.

“An adequate funding source for the program is not identified in the bill,” Slavens said. “The bill also exempts mining operations and aggregate mining has been one of the leading causes of water disputes in the state.”

According to analysis from the Senate Fiscal Agency, the program would lead to increased costs for the DEQ and the Department of Agriculture and Rural Development.

The report indicated that the previous program had cost approximately $200,000 annually. Total costs depend on how many complaints are investigated.

The resurrected program will receive funding from a supplemental appropriations bill passed and signed in October.

“The program kept groundwater disputes out of court, saving taxpayer dollars and freeing limited court resources to focus on other priority cases,” Green said. “The program paid for itself.”

Celeste Bott contributed to this report.

One thought on “Michigan program to resolve water disputes revived”