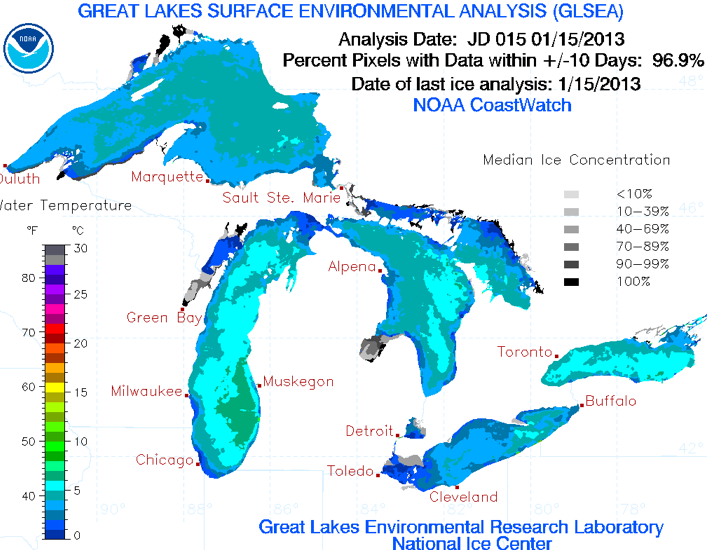 A composite map of the Great Lakes produced by NOAA’s CoastWatch organization shows near-historic low ice coverage across the region.

The map, known as the Great Lakes Surface Environmental Analysis, is a composite of data taken from NOAA satellites orbiting the earth’s poles and radar scans of the lakes by the National Ice Center. The resulting image shows surface water temperature and ice coverage, important data for region scientists, fishermen and boaters. The map’s data is updated daily.

The map is used by people in many different fields, Leshkevich said. It began as a tool to help hydrodynamic modelers who needed daily temperature readings across the entire Great Lakes region. It has since been used by fishermen and charter boat captains in order to find warmer areas of the lakes where fish gather, as well as by ecologists studying temperature-sensitive species like the zebra mussel.

“It’s a fairly accurate product,” Leshkevich said. “We’ve validated it against data buoys in the lakes and against visual data we’ve been able to get on clear days, and it’s always been very close.”

According to Leshkevich, inaccuracies can result from cloud cover and solar warming of the lakes during the day. Many of these issues have been reduced by the introduction of more satellites into NOAA’s system. Originally only two satellites were positioned to retrieve data. Now there are four, with a fifth expected to begin transmitting data within the next week.