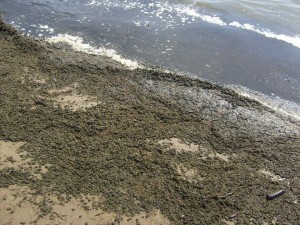 An algae that is potentially toxic has shown up on a Michigan beach at Lake St. Clair. Image: Vijay Kannappan

A new species is apparently making its way onto Great Lakes beaches, and it is potentially toxic.

Native to the southeastern United States, it is a blue-green algae, or cyanobacteria, called Lyngbya wollei.  It was first found in the Great Lakes region in the St. Lawrence Seaway in 2005. Then it was spotted in Lake Erie in 2006.

Now it has been identified at Lake St. Clair Metropark north of Detroit, according to Wayne State University ecologist Donna Kashian.

Her research paper on the finding is under review for publication in an upcoming issue of the Journal of Great Lakes Research.

Kashia first spotted the cyanobacteria in 2009 while documenting vegetation prior to an effort to remove an invasive shoreline weed from the park.

“Once we got there, it became obvious there was this other stuff all over the beach,” she said. She immediately recognized it as a type of Lyngbya. “It’s very distinctive. It washes up in balls, like pebbles. If you took coarse hair and rubbed it like Play-Doh between your hands into a ball and dyed it green, that’s exactly what it looks like.”

In 2010, she and several other researchers separately determined it was Lyngbya wollei, the same organism that has plagued waters in the southeastern United States for decades. It forms thick, nuisance blooms and releases toxins that can cause skin, oral and gastrointestinal inflammation.

Kashian suspects that the cyanobacteria entered the Great Lakes system by hitchhiking on the hulls of boats.

She has seen Lyngbya wollei at the park every year since her initialdiscovery. She noted an especially large amount in 2012, possibly due to the hot summer. 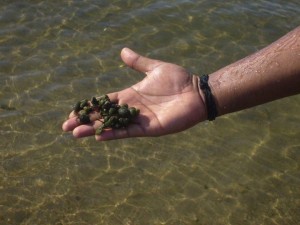 But it may have been around for some time.

For a decade or so, park staff have seen what is presumed to be the same cyanobacteria on the beach, although they never identified it, said Paul Muelle, chief of natural resources for the Huron Clinton Metroparks, which includes the Lake St. Clair park.

“We get some (every year), but since we clean the beach on a daily basis during the use season, it really hasn’t been a huge problem there,” he said. Because other weeds make up the bulk of the daily beach grooming, pinpointing the cost for removal of the cyanobacteria is difficult. Nonetheless, using information from Muelle, Kashian estimated that the park’s tab for removal of Lyngbya was about $10,000 in 2010.

“Where we are noticing it more is in the natural areas where we don’t do active management,” Muelle said. He described mats of Lyngbya wollei that extend “40-50 feet wide,” in the area of the park near Point Rosa Marsh.

“And it’s deep,” he said. “We had grass growing on the top of it. It looks like solid ground and I tried to walk out there, but you could go up to your waist in gook. It was pretty excessive.”

One concern is thatLyngbyawill spread to other areas, particularly to shallow-water areas such as parts of Saginaw Bay and to inland lakes, Kashian said. The other concern isthat it will produce toxins.

“It absolutely could become toxic here, but we don’t know enough about it,” Kashian said. She noted that even with the blooms of Microcystis, a different type of cyanobacteria that has been heavily studied, scientists still don’t know why only some blooms are toxic.

“They don’t know what triggers it to start producing toxins, and we know even less about Lyngbya than Microcystis,” she said.

While Lyngbya wollei typically carries a toxin in the southern United States, the Lake Erie sample was not toxic. Kashian’s funding didn’t cover toxicity research. Instead, she investigated if the cyanobacteria at the park harbor E. coli bacteria, a bacteria that often prompts beach closings.

“We found very high levels of bacteria in these mats,” she said. “That’s a problem because it’s all over the beach, and if you have a lot of bacteria and kids play on it, they can potentially get sick. In addition, if you have large deposits on the shore and there’s wave action, bacteria could actually be transported back into the lake and that could contribute to beach closures.”

The mats also disrupt water flow into and out of Point Rosa Marsh, Muelle said. Marsh-restoration is under way and the removal of the Lyngbya mats is part of that effort. At the swimming beach, “the question is how do we manage this,” Muelle said. “If there are problems, obviously we’re concerned about public contact.”

Kashian added, “It’s definitely an invasive, nuisance species worth watching, because it hasn’t been documented in the Great Lakes before the first sightings in the St. Lawrence.”