Back in the 1970’s, Lake Erie — often referred to as the Great Lakes’ “canary in the coal mine” — was closely monitored by government agencies. As lake health improved, that scrutiny was gradually withdrawn and funds diverted elsewhere. But with the advent of new problems, from dead zones and algae blooms to invasive species like Asian carp, there are again many eyes on the lake. And as independent producer Karen Schaefer reports, the samplers are coming up with some surprising discoveries. 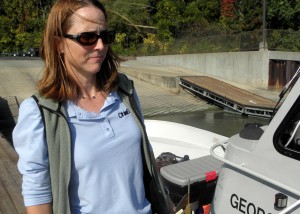 Amy Jo Klei grew up on Lake Erie and has been bringing her daughters here for years. But these days, she’s worried about the changes she’s seeing in the lake.

” When my daughters were little, the water was clear, and I said, oh, isn’t this great,” Klei said. “And the last few summers I’ve been up here, my heart is aching and I’m like, I’ve gotta fix this,” she said.

Klei is the Ohio Environmental Protection Agency’s Lake Erie manager. It’s her job to oversee a new three-year monitoring program to update conditions in the lake, funded by the federal Great Lakes Restoration Initiative. She’s out on the Black River, a Lake Erie tributary to take part in the latest sampling.

“And the purpose of this was to collect the water quality data to assess the current conditions of the lake, to help us be able to detect trends and changes as they happen” Klei said.

One of those changes has been massive harmful algae blooms, last seen in Lake Erie in the 1970’s. Those blooms have hurt water quality and cost lake users – from water treatment plants to charter boat captains – tens of thousands of dollars a year. Klei says the algae issue, along with other emerging challenges to Lake Erie’s health, have re-focused bi-national cooperation on lake monitoring in a way that’s never been seen before. She cites a recent water quality agreement signed this fall between the US and Canada.

“One of those, under the near shore annex of the new agreement, is the requirement to develop a comprehensive monitoring framework for Lake Erie,” Klei said. “And I’m sure our work here and our monitoring will certainly be a key piece of that, along with our other state and Ontario partners. ” 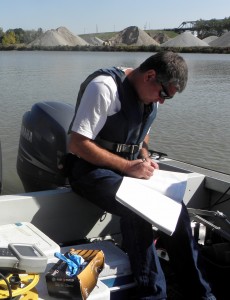 Ohio EPA biologist Scott Winkler is checking on wildlife quality on the bottom of the Black River, a Lake Erie tributary.

Among those partners are the US EPA, the US Fish & Wildlife Service, state Departments of Natural Resources from Michigan, Indiana and Ohio, Ohio Sea Grant, and research institutions like Heidelberg University of Ohio, Ohio State University’s Stone Lab, and the Universityof Toledo. Canada is also a new partner. At the fall Great Lakes Week conference in Cleveland, Michael Goffin, regional director for Environment Canada in Ontario, said his government is now committed to new algae testing on Lake Erie.

” It’s in place this year and the funding continues for the next four years,” Goffin said. ” That’ll allow us to achieve the commitment within the amended Great Lakes Water Quality Agreement to have new targets in place within three years of entry into force of that agreement, ” he said.

But three or four years may not be long enough to chart the course of changes in Lake Erie, some of which are also occurring in other Great Lakes’ bays and near shore areas. Ohio EPA biologist Scott Winkler says one of the things he’s discovered from recent monitoring with new federally-funded equipment is that harmful algae blooms, previously thought to be primarily surface phenomena, may be far more complex, especially for the millions of people who get their drinking water from the lake.

” Quite often, at water intakes, where they’re drawing water from the lakes, the level where they’re drawing water intakes, even when we don’t see anything at the surface, we do see the toxin produced by this algae, microcystin, is in the water sample,” Winkler said. “Yet when you look at the water, it looks clear, it looks nice, everything looks fine. Through this sampling, we’re seeing that one of the potential reasons for this increase is that all of the algae is down there, at the level where this intake is drawing it in,” he said. 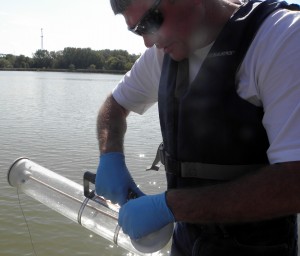 Scott Winkler is an Ohio EPA biologist who’s been monitoring the Black River, a Lake Erie tributary, for the last 3 years.

Winkler and Klei say that new state and federal water quality monitoring on Lake Erie will likely continue beyond current federal funding, set to expire next year. In the meantime, Klei says all eyes are on Lake Erie. She’s even got charter captains testing for signs of algae.

“These guys live on the lake, they’ve been on it their whole lives,” Klei said. “They know when change is happening, they know when something unusual is going on. It’s just been really helpful. ”

4 thoughts on “Keeping an eye on the Great Lakes canary”