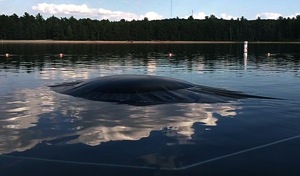 University of Wisconsin scientists are studying how mixing the water in a lake could eliminate an invasive fish.

The technology works by moving large air bladders up and down the depth of a lake, mixing the water and raising its temperature to where it is intolerable for the fish, said Jake Vander Zanden, supervisor of the study.

The bladders are much like gigantic trampolines, Vander Zanden said. They’re about 25 feet across. Air is pumped in and out so it rises and falls.

The project is designed to eliminate invasive rainbow smelt from the small Crystal Lake in Vilas County, Wis. If successful, it may be applied to other lakes where smelt have invaded and decimated native populations of yellow perch, lake whitefish, northern cisco and commercially important walleye.

“They are highly predatory and voracious,” said Vander Zanden. “(They have) really big teeth and they specialize in feeding on the young of other fish species.”

The smelt can only live in the cold water at the bottom of the lakes. That’s where the mixing comes in.

A typical northern Wisconsin lake is stratified with warm waters on top and colder waters on the bottom, said Jordan Read, the developer of the technology. “That’s because warmer water is less dense than colder water.”

When the mixer, called a Gradual Entrainment Lake Inverter, homogenizes the temperature of the lake, native species are unaffected. But rainbow smelt will become stressed and perhaps die, the scientists said.

“They didn’t have a massive die off where, you know, they’re all floating up at the surface,” he said. “Our goal was to get the lake up to 21 degrees Celsius because laboratory studies that put rainbow smelt in 21 degrees show that (they) die almost immediately. 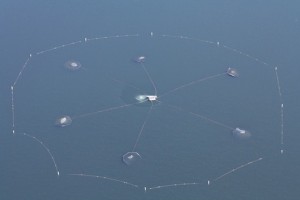 An aerial view of the mixers. Photo: Carol Warden.

“We warmed up the lake until about 21 degrees for a long period of time. Rainbow smelt were acting very weird. They clearly were stressed, but it looks like there are still some rainbow smelt out there in the lake.”

The scientists need to collect data up until the lake freezes before they can calculate how many live smelt remain, he said. “A lot of them have died, but there are still some that have somehow managed to survive.”

Young rainbow smelt like warm waters, but the adults are cold-water dwellers, said Zachary Lawson, a graduate student on the project. So it takes more than a year of the method to kill both adults and the young fish that are invulnerable until they grow to be adults.

Also, “the stressed fish from this past summer still have to make it through the entire ice-on season, which is normally a pretty difficult environment for fish anyways, (those) that aren’t stressed,” he said.

The researchers mixed the lake for the first time last summer.

Other methods for mixing lakes have been used to control water quality, such as providing aeration, said Read. That technique works by pumping air to the lake bottom and letting bubbles rise to the surface.

But for deep lakes like Crystal Lake, the amount of energy required to get compressed air 65- to 70-feet deep is very expensive, he said.

The new inverters do something similar but more efficiently. The air bladder is like a giant bubble. The larger the size, the larger the wake, which means more water is mixed.

“The end result is that we use less air to generate a similar amount of mixing potential,” Read said.

The testing will go on for another two summers, after which the scientists hope to intensively monitor the lake for another year or two, Lawson said.