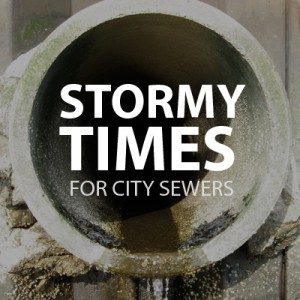 The flow of sewage into the lake would have been worse if it weren’t for three decades of expensive and labor-intensive efforts to repair and overhaul the sewer systems of Duluth and neighboring Superior, Wis.

Now such crucial sewer system improvements across the Great Lakes are at risk because of the federal budget crisis. It’s happening right when climate change is expected to mean more of such heavy rains.

In older cities and towns across the Great Lakes, untreated sewage is regularly released into rivers and lakes when pipes that handle both sewage and storm water are overwhelmed by rain. Duluth reduced such combined sewer overflows — known as CSOs – by 91 percent  by separating sanitary and storm sewer pipes and building catchment basins.

The most important funding source for improving sewers and preventing overflows is a federal program that  provides low-interest loans. Over the past three years this Clean Water State Revolving Loan Fund — the SRF – facilitated $1.8 billion worth of CSO-related projects across the Great Lakes region.

If Congress fails to avoid budgetary sequestration scheduled in January, the SRF is in line for the 8.2 percent across-the-board budget cuts mandated by 2011 negotiations over the national debt.

Even if Congress strikes a deal to avoid sequestration, significant — perhaps even greater — cuts to the loan fund are likely. Great Lakes advocates say such cuts could be devastating for cities and towns trying to stop CSOs – halting some projects in their tracks, preventing other projects from ever getting started and setting the stage for declining funding levels in future federal budgets.

The biggest risk for sewer improvement funds is that people start viewing them as add-ons instead of essentials, said Joel Brammeier, executive director of the Alliance for the Great Lakes. 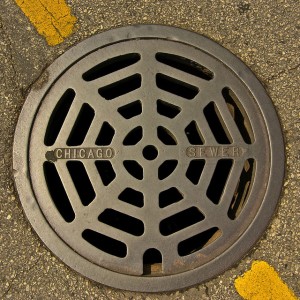 Sewage is not fat

“The question on everybody’s mind at the federal level is, ‘Is there any fat we can cut?’” Brammeier said. “That’s simply not what these programs are — they’re investments in solving problems that have been festering for decades.”

Slashing funds for sewer improvements will mean greater costs in the future, Brammeier noted. Letting sewers deteriorate makes them more costly to fix later, not to mention the costs of dealing with near-shore contamination and beach closures.

He warned that 2013 cuts could spiral: “Those cuts will be sustained for many years to come and will set back the projects in the pipeline…less and less money becomes available and the perceived ability of communities to fix their problems becomes lower and lower, so you end up with a race to the bottom and increases in combined sewage going into the lakes.”

“These are programs that generate economic growth — they create jobs, fuel local economies, in our minds this is the kind of program that cannot be cut and should remain fully funded,” said Jeff Skelding, the National Wildlife Federation’s campaign director for the Healing Our Waters-Great Lakes Coalition. “This has a positive effect on the economy. The whole goal here as far as I can tell is to rejuvenate the national economy and those two programs are doing this for the Great Lakes region.”

Skelding is afraid that when the U.S. EPA decides how to slash its budget that the loan program will be targeted because of its significant size.

“With the marching order of mandatory cuts it will be likely they would look at the big programs first, but we would hope when they do that they would factor in other considerations,” he said. “It would be ludicrous to just look at the size of each program and say that gets the biggest percentage cut. You have to look at the jobs that are created, the contribution to recovering the economy.” 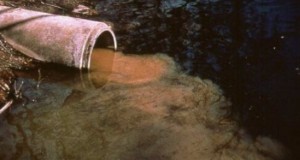 Sewer overflows like this one in Milwaukee contribute to billions of gallons of polluted water dumped into the Great Lakes. Photo: Wisconsin DNR

Ever since the 1972 Clean Water Act sparked governmental and public attention of  water quality, federal funding has been crucial to building modern treatment systems and addressing CSOs across the Great Lakes. Most municipalities, especially smaller ones, lack the capital or ability  to launch expensive, long-term infrastructure projects on their own.Sewer overhauls are often the most expensive projects they undertake.

An early federal grant program was replaced with the state revolving loan fund, which allows municipalities to finance projects and repay the federal government  through sewer rate payments and savings generated by the overhauls.

“We built tremendous infrastructure 40 years ago, and now it’s all wearing out at once,” said environmental engineer Jim Ridgway, who was assistant director of wastewater operations for Detroit’s water treatment plant and worked with numerous public and private efforts addressing CSOs. “If we have virtually no repair and replacement budget, it’s all going to fall apart. We either start investing now or we will have catastrophic failures later.”

CSOs disproportionately affect communities struggling with many other serious financial and structural challenges, Ridgway said.  “In these older cities, the sewers began as creeks, were ‘improved’ to prevent urban flooding, were enclosed and incorporated sewage transport directly to larger rivers and lakes and then, very late in the process, sewage treatment was added.

“Now, as the profession understands the importance of restoring the hydrology to improve water quality and lower operating costs, funding is less available to the most vulnerable communities.  But the sewage that escapes their boundaries impacts us all.”

Ridgway has seen firsthand what a dramatic effect federally-funded wastewater programs can have on Great Lakes ecosystems and communities.

When he was a child growing up in Detroit, the Rouge River, which runs through the city and surrounding towns, was a stinky eyesore that residents avoided. It emptied industrial pollution, contaminated storm water and raw sewage into Lake Erie via the Detroit River.  But thanks to a watershed-wide program carried out with $300 million in federal grants, the Rouge today is much healthier, and by extension so are the near-shore areas of Lake Erie where the river water flows.

Over 20 years, the cooperative efforts of state, local and federal agencies and local communities meant that most CSOs were eliminated along 89 of the Rouge’s 127 miles. The project separated previously combined sewers, added CSO treatment facilities and made other improvements to greatly reduce storm water run-off, untreated sanitary sewer releases and CSOs. Rouge River water quality improved remarkably: e. coli levels dropped and dissolved oxygen levels rose, the river and near-shore lake waters became cleaner, fish populations increased and local residents did not have to worry about as many beach closures or the risk of getting sick from taking a swim in Lake Erie.

“Most folks believe that the government has a role in removing sewage from our waterways,” said Ridgway, who helped oversee the Rouge improvements as executive director of the Alliance of Rouge Communities. “We believe that means funding regulation, monitoring, and yes, construction of controlling works.

“Let’s hope that Congress can find a way to make sure that the progress we have made to date can continue.”

3 thoughts on “Fiscal cliff could dump sewage into Great Lakes”