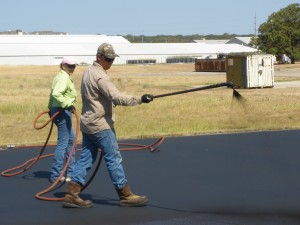 Legislators in at least three Great Lakes states are proposing statewide bans of certain pavement sealants that have killed aquatic animals and are considered a possible health risk to humans.

Bans are already in place in 15 municipalities and two counties in four states; Minnesota, New York, Texas and Wisconsin. But the statewide bans appear on hold while experts argue over their effectiveness.

Coal-tar sealant is primarily used on parking lots in the eastern and mid United States. It is made with coal-tar pitch, a human carcinogen, according to Environmental Science & Technology magazine.

The sealants also contain Polycyclic Aromatic Hydrocarbons — called PAHs for short – some of which are considered probable human carcinogens by the Environmental Protection Agency.

Coal-tar sealants release large amounts of PAHs into the environment during application. And as the sealant erodes, rain can wash them into lakes, rivers and streams.

The PAHs do not dissolve in water but build up in the sediment of lakes and streams in urban and suburban areas that receive runoff from parking lots sealed with coal-tar. Once in the watershed they can cause mutations and birth defects in aquatic life, Van Metre said.

Negative effects on fish and other aquatic animals include inhibited reproduction, fin erosion, liver abnormalities, cataracts and death, according to Geological Survey reports.

Coal-tar sealcoat makes up about half of the PAHs in lake sediment, according to Environmental Science and Technology. It is why PAH levels have increased in the sediment of urban and suburban lakes since 2000 even when other major PAH producers, like power plants, have been decreasing emissions.

There have not been any studies on the negative effect of coal-tar sealant on human health, Van Metre said. But because it contains multiple contaminants that cause cancer in other animals it is a probable carcinogen for humans.

Because PAHs do not dissolve in water they do not pose a threat to the safety of drinking water, according to the 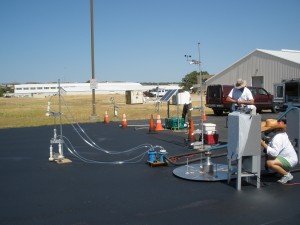 Geological Survey report. But they can be absorbed by humans through inhalation of wind-blown particles, ingestion of dust or skin contact.

Geological Survey studies have found  dust in residences adjacent to parking lots finished with coal-tar sealants with PAH concentrations  25 times that of other homes.

The Environmental Health Perspectives Journal reported that prenatal exposure to high-levels of airborne PAHs can be linked to lower mental development at age three. And Columbia University researchers found a correlation between high levels of prenatal exposure to PAHs and obesity at age five and seven. Neither study made a distinction about the source of PAHs or linked exposure directly to sealcoats.

These recent studies have prompted legislators to propose bans of the coal-tar sealcoat in several states including Michigan, Illinois and New York. These bills remain in committee. Only the state of Washington has approved a statewide ban.

“With it being a carcinogen, I thought we should keep pursuing it so we can get this legislation pushed through,” Slavens said.

She is unsure what is holding the legislation up once it gets to committee.

Anne LeHuray, executive director of the Pavement Coating Technology Council, said the only real effect of a ban is to hurt small businesses.

“A ban would affect revenues, employment and it would have no environmental benefit; I feel that is pretty demonstrable,” she said. “Local politicians in particular are being misled, they are always looking for something they can do for their constituents and coal-tar sealants are being made out to be such a horrific source of PAHs and it’s not.”

She said the Geological Survey’s research has overblown the risk to human health  and overstates the amount of PAHs produced by the sealers.

The danger to humans has been exaggerated by activists, LeHuray said. No one in the industry is aware of an insurance claim for damages or health effects from sealcoats.

The Geological Survey report is wrong on the amount of PAHs released as well, she said. A report from the Pavement Council on PAH releases within New York and New Jersey shows coal-tar sealant contributing only 0.4 percent of total PAHs.

This data is consistent with what Van Metre has found in Great Lakes states.

“In the Great Lakes region the high levels of PAHs are due to the region’s history of coal stoking and iron production, not parking lots,” he said.

But annually more PAHs are released into the environment by the application and wear of coal-tar sealcoat than from all vehicle emissions, said Van Metre. 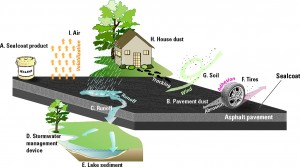 Diagram showing the various ways in which coal-tar is spread from parking lots to the surrounding environment. Credit: Environmental Science and Technology Magazine.

Slavens said she wants to alert people of a safer asphalt-based alternative that has 1000 times fewer PAHs than the coal-tar sealant.

LeHuray said the asphalt based sealant does not last as long as coal-tar sealant and as a petroleum product its price fluctuates with the price of oil. This unpredictability is why many applicators choose not to use it.

“Someone seals a parking lot to protect their underlying investment in the asphalt,” LeHuray said. “If you are using the regular coal-tar base sealer it only has to be redone -every three to five years, whereas if you are using the asphalt base sealer you have to redo it every one to two years. And there hasn’t been a full scale study of how much environmental impact there is when one has to pave more often.”

Coal-tar sealants are used primarily east of the continental divide while the asphalt based sealant is used west of the divide, according to Environmental Science and Technology. More steel mills, which produce the coal-tar pitch in coking ovens and coal-tar distillation plants are located in the Mid-west and eastern United States, so those areas have historically had greater access the ingredients for coal-tar sealant. And the Environmental Science and Technology report estimates that 85 million gallons of coal-tar sealant are used in the U.S. annually.

The Pavement Coating Technology Council is not a lobbyist group, but they perform and collect research on the subject.