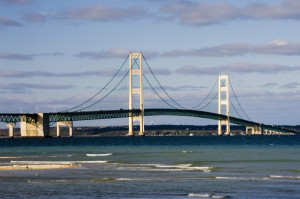 Enbridge’s Line 5 pipeline, which runs parallel to Michigan’s Mackinac Bridge, moves oil from its origins in North Dakota and Alberta to refineries in Michigan, Ohio, and Ontario. Photo: Michigan Department of Transportation.

A National Wildlife Federation study due out this week raises concerns over a proposal to pump more oil through a pipeline that crosses Great Lakes water near Michigan’s Mackinac Bridge.

The pipeline, known as Line 5, is owned and operated by Enbridge, a pipeline and energy company based in Calgary, Alberta. That is the same company that operates the pipeline that ruptured two years ago near Marshall, Mich., spilling hundreds of thousands of gallons of oil into the Kalamazoo River.

Line 5 carries crude oil from the Bakken Shale Formation in western North Dakota and the Alberta Tar Sands in eastern Alberta to refineries near Sarnia, Ontario; Toledo, Ohio and Detroit, Mich. To meet increasing demand, Enbridge wants to add horsepower to pumping stations along the route to move an additional 50,000 barrels of oil per day.

That would bring the total moved through the pipeline to 540,000 barrels per day.

National Wildlife Federation officials say the pipeline is the same age as the one that spilled oil into the Kalamazoo River.

“We’re concerned about the state of the pipeline and whether adding horsepower to its pumping stations will put it at risk of a similar leak,” said Beth Wallace, a community outreach regional coordinator with the federation’s Great Lakes Regional Center in Ann Arbor, Mich.

Jeff Alexander, a longtime environmental journalist who assisted the federation with the study, cited difficulties in acquiring the construction and repair history of the pipeline as cause for concern.

“There’s never been a spill in that section of the pipeline, and they have emergency shutoff valves at the pumping stations on both sides,” said Alexander, “but what’s alarming about the situation is how little information we have on the condition of the pipeline.”

Concern over terrorism has made it much more difficult to get information on oil pipelines from the federal government, he said. 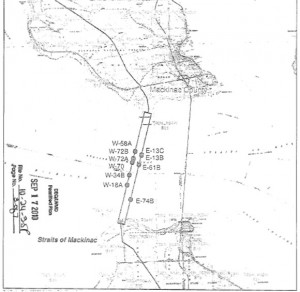 Enbridge’s Line 5 pipeline splits in two as it crosses Lake Michigan. Enbridge is currently pursuing a project to increase the horsepower of pumping stations along the pipeline’s route. Photo: Pipeline and Hazardous Materials Safety Administration.

Pipeline information is still available through the Freedom of Information Act, a process that the wildlife federation is looking into. Such an information request requires a lengthy review before release to prevent terrorists from getting sensitive data.

Meanwhile, the consequences of a spill in the Straits of Mackinac could be catastrophic, Alexander said.

“One of the big things that came out of our study was that this pipeline crossing is easily one of the most significant in the Great Lakes, in terms of environmental hazard,” he said. “There are fierce currents in the straits that, if there was a rupture on the pipeline, could spread very quickly.  With the right wind, according to our models, an oil spill could reach Mackinac Island in only three hours.”

The federation recommends safety improvements, including stationing an emergency response team near the straits. Currently the company has teams in Escanaba and Bay City, some three hours away, Alexander said.

“We’d like to see them put a response team there at the site, and we’d like to see more information on the condition of the pipeline become public knowledge,” Alexander said.

“The safety and integrity of our pipelines is our number one focus,” said Enbridge spokesperson Becky Haase. “With proper maintenance and procedures, a pipeline can last indefinitely.

One Enbridge pipeline running through Minnesota is older than the one in Michigan and it’s still fine, she said. The company regularly inspects all lines as required by department of transportation regulations, she said.

Haase also pointed out that Enbridge developed an informational pamphlet to educate landowners along the pipeline’s path across both Michigan’s upper and lower peninsulas.

Enbridge must secure permits from the department of transportation to proceed with the project, according to the document. The company expects to have the entire project completed by the end of the year.

The Enbridge document states that Line 5 is expected to be operating at its upgraded capacity by early 2013.

For the National Wildlife Federation, specific information on the condition and safety of Line 5 remains the goal.

“Disclosure of information is the important thing for us,” Alexander said, “especially in places like the Straits of Mackinac. It deserves the highest level of scrutiny.”