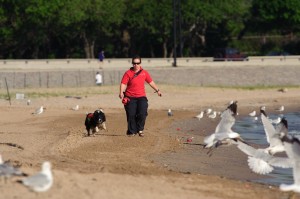 Canines are taking their herding skills from sheep and cattle farms to sandy shorelines.

In a measure to improve water quality, beach officials and scientists in the Great Lakes region are recruiting dogs to chase seagulls.

Seagull waste contains bacteria that harms water quality. When the water is contaminated, park officials post swim advisories, warning swimmers to stay out of the water and sometimes close beaches.

A new EPA study may help prevent that. The study published in the Environmental Science & Technology journal reports that scientists used dogs to rid North Beach, in Racine Wis., of seagulls.

For eleven days researchers calculated the concentration of different bacteria on the Lake Michigan beach. They measured E.coli and Enterococcus concentrations to calculate fecal contamination. In addition, the study collected information on potentially pathogenic bacteria, which can cause infectious diseases.

Researchers then used two trained border collies with handlers to harass gulls while continuing to survey the water quality.

The dogs prompted the gull population to drop 98 percent, from nearly 670 birds to just fewer than 20.

Fewer gulls meant better water.  E.coli bacteria decreased nearly 30 percent with the removal of half the gulls.  Before the dogs started working, water samples tested positive for potentially infectious bacteria on seven out of eleven days. After the dogs chased the seagulls, researchers failed to find any contagious bacteria.

The study provides scientific evidence to back up what the Chicago Park District has speculated for years.

For several years three parks in Chicago have used trained dogs with handlers to combat seagull waste, said Cathy Breitenbach, the director of Lakefront Operations for the Chicago Park District. 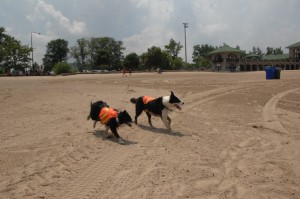 “(Dogs) chasing the birds away has really made the water quality improve,” she said. “They were depositing their waste on the beach and it was kind of staying there. It’s been the most successful source mitigation strategy that we’ve been able to find.”

Chicago beaches have used canine harassment since 2008, excluding 2009. The year before dogs started patrolling, Chicago’s 63rd Street Beach had about 44 days with water quality advisories out of about 100 swimming days, Breitenbach said.

“And the next year, when we stated the canine harassment work, there were about four. Whether or not you can attribute all to the dogs, I cannot really say, but it is really striking,” she said.

Although the evidence between gull removal and water quality was not scientifically quantified, the results were promising. The Park District has continued to use dogs through a project partially funded by EPA.

But the study and the program in Chicago are not an excuse for people to bring their dogs to the beach.

Susan Hagberg is the president of Wild Goose Chase Inc., the company that supplied the border collies and handlers, for both the study in Wisconsin and the patrols in Chicago.

Hagberg said they use border collies with handlers for a reason.

“They are herding dogs. We’re using border collies and their nature is to move something, drive something whether, it’s a sheep or anything else” she said. “So it’s actually the knowledge of the handler to be able to identify ‘we don’t want to move you know the terns,’ but we want to just direct the dogs for seagulls, ring-billed gull and herring gulls.”

She adds the harassment is not all about chasing after gulls.

“The border collie has a stare and stance like a wolf or a coyote when it’s stalking and it’s that ability, that visual contact between that group of birds that you want to disperse and the dog that, moves them,” Hagberg said.

Although she would like to extend the program, it is very labor intensive, some running seven days a week from dawn till dusk, Hagberg said.

“It’s a lot of work. It’s very, very difficult work cause you’re constantly moving around on a beach trying to prevent these birds from landing,” Hagberg said.

Education programs about feeding gulls, along with dog patrols, will have the greatest benefit Hagberg said

“The Great Lakes water is a resource that has to be maintained to it’s highest quality and with that in mind, you have to look at what can be done to keep it that way and we’re just one of the ways of dealing with a source of bacteria that we can control,” Hagberg said. “We can’t control necessarily what’s dumping into the lakes from outside sources and so on, but seagulls we can.”