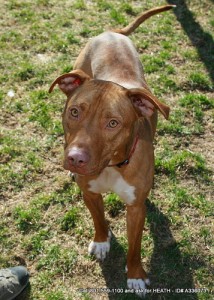 Since the 1980s, American pit bull terriers and similar breeds have had a reputation for toughness, aggressiveness and violence, leaving them susceptible to exploitation by dog fighters and breeders, said Kevin Hatman, a public relations coordinator for the Michigan Humane Society in Bingham Farms.

That bad reputation comes with a cost – of the estimated 30,000 animals taken into the humane society’s shelters each year, about 30 percent are pit bulls or pit bull mixes, Hatman said. Although some prospective pet owners will take pit bulls into their homes, he said most gravitate toward smaller dogs or avoid the breed.

The society has shelters in Detroit, Rochester Hills and Westland.

“It’s sad, because they really can be wonderful dogs,” Hatman said. “Many pit bulls are loyal and provide good company, but they’re often seen as a guard dog or an aggressive animal.”

Ingham County Animal Control Director Jamie McAloon-Lampman estimates the proportion of pit bulls handled by her agency to be even higher – about 70 percent of the dogs it picks up are some variation of a pit bull, she said.

However, the number is down from past years when the percentage of pit bulls in the shelter went as high as 80 percent, she said.

“It’s not that it’s difficult to adopt them – there’s just so many of them,” she said. “So many of these dogs have had a horrible life – being fought, neglected and mistreated – but many of them are still so loving and are perfect to be adopted into loving homes.”

In some communities, the negative connotation and stories of aggressive attacks have led to restrictions or all-out bans on the breed. Several municipalities near Detroit have bans or restrictions, as have various cities and townships throughout the state.

For instance, Highland Park and Newaygo have outright bans, Ypsilanti Township requires sterilization and other areas such as Claybanks Township and Hazel Park have restrictions on pit bull adoptions.

In Hatman’s opinion, such bans only perpetuate public misconceptions.

“It does nothing to help, and only punishes responsible pet owners,” Hatman said.

The violent reputation often associated with pit bulls can in many cases be traced to dog fighting, whose organizers train the dogs to be aggressive, said Jill Fritz, the state director for the Humane Society of the U.S.

Instances of pit bull dog fighting still occur in Michigan – in August, a 46-dog fighting operation was broken up in two Kalamazoo homes, Fritz said. The dogs are in an emergency shelter, and volunteers are training them for potential adoption.

Each dog has a distinct personality, Fritz said, adding that the perception of the breed is wrong.

Although she’s noticed more acceptance because of educational efforts by shelters and advocacy groups, she said the root of the controversy generally lies with irresponsible owners or exploiters of the animals. 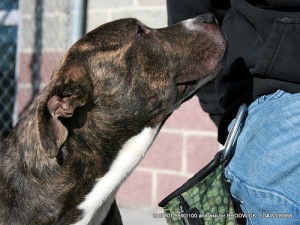 “In most cases, it’s the dog owners who are the problem,” Fritz said. “Any dog can be good or it can be dangerous, and to group a type of breed together is just not right.

“If owners are allowing their dogs to hurt or threaten people or animals, they’re the ones that need to be held responsible,” she said.

Hatman said that if dogs brought into the humane society’s shelters were bred to be aggressive or have violent tendencies, behaviorists will work with them or look into putting them into a pit bull placement home before putting them up for adoption, Hatman said.

Those that cannot be trained are euthanized.

“We’re all here to save more lives, but at the end of the day don’t want to adopt out a pit that could harm someone,” he said. “We want people to know the pet they adopt is a wonderful dog.

“Pit bulls can make absolutely wonderful pets, and although it’s a challenge to respond to the problems surrounding them, we’re all trying,” he said.

Beth Contreras, vice president of the Charlotte-based animal rescue and advocacy organization Voiceless-MI, said there still is a long way to go before problems associated with pit bulls are minimized and the misconceptions fade away.

Voiceless-MI recently concluded a free spay and neuter program for pit bulls and will continue advocating for the breed, Contreras said.

“I see very minimal improvements, but I’m not really sure what the best long-term solution is,” Contreras said. “We’ll just keep doing what we’re doing, simply because there’s so many more of them out there and we’re going to keep seeing more.”